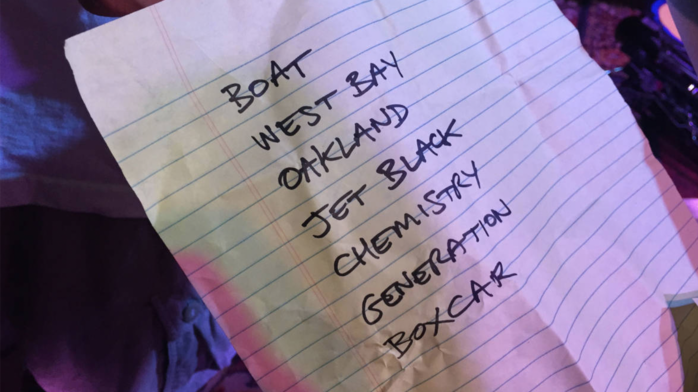 Jawbreaker Played A Show Last Night And You Weren’t There

So, surely you’ve heard by now that Adam Pfahler, Chris Bauermeister and Blake Schwarzenbach are getting back together as Jawbreaker, yeah? And we don’t necessarily mean next month for Riot Fest. No, there has been a steady drip-drip-drip of intel disseminated to us fans since the big announcement, proving that this thing is actually happening. And in order for it to happen properly, the guys probably do need to meet up at least once or twice before taking the Riot Fest stage.

After the big reunion announcement a few months ago, Jawbreaker posted this picture from the rehearsal space: (This kinda reminded us of when The Replacements started teasing everybody back in 2013, ahead of their big Riot Fest reunion)

Then, the other day, Jawbreaker frontman Blake Schwarzenbach gave his first interview since the Riot Fest announcement. Check out the very informative conversation he had with Missing Words Podcast.

Then they played a fucking SHOW! WTF?!

So, about a month ago Jawbreaker reached out to us asking if it’d be OK for them to play in the San Francisco Bay area ahead of Riot Fest. We said “Of course,” and hadn’t thought much about it until this morning, when we all saw these videos infesting our news feeds just like you did:

Holy shit! This is actually happening! And they sound great!! Yes, they played the 200-capacity Ivy Room in scenic Albany, CA (just north of Berkeley) last night. A fella named Gabe Maline was there, and wrote a very descriptive post about the show, complete with pictures, video and, of course, passion and heart…and it all then spread like wildfire. Recounting a post-show encounter from last night, Gabe reports on Blake’s reaction to the unbelievability of the evening:

“I can’t believe it either,” [Blake] says, beaming. “I never thought I’d see the day that my cool band would play in Albany.

He’s still got it!

Let’s check out last night’s set list, shall we?

They opened with four songs from 24 Hour Revenge Therapy, then three from Dear You, and close with their biggest “hit,” also from 24 Hour. WHAT DOES IT ALL MEAN?! Well, Gabe has an idea:

“The Boat Dreams From the Hill.” That’s it. Of course it’s “Boat.” The first song that Jawbreaker plays live in 21 years, a song of yearning for one’s more active days, of a new life, and of beginning again—that’s how they start their set.

I’m guessing “Boat” has been at or near the top of most of your “Guess the Opening Song” pools—in a dead heat with “Want” and “Save Your Generation—but this makes it so much more…real.

If you’d like to see if this is a pattern—and you can’t wait the six weeks between now and Riot Fest—Jawbreaker is playing another show next week. This will be on August 12th at the Rickshaw Stop in San Francisco. Tickets for that show went on sale this morning at 11:00AM PST and sold out around 11:01AM PST, so you may just have to follow the internet that night like the rest of us.

There’s also the big premiere of the documentary about the band, Don’t Break Down: A Film About Jawbreaker, the night before. This takes place at the Alamo Drafthouse Theater in S.F. on August 11, with the band participating in a Q&A alongside the filmmakers. Both of that night’s screenings sold the fuck out pretty quickly as well.

At this point, it’s still looking like the only surefire way to see Jawbreaker any time soon is to buy tickets for Riot Fest. [Insert shameless ticketing link here]

Are we excited yet?