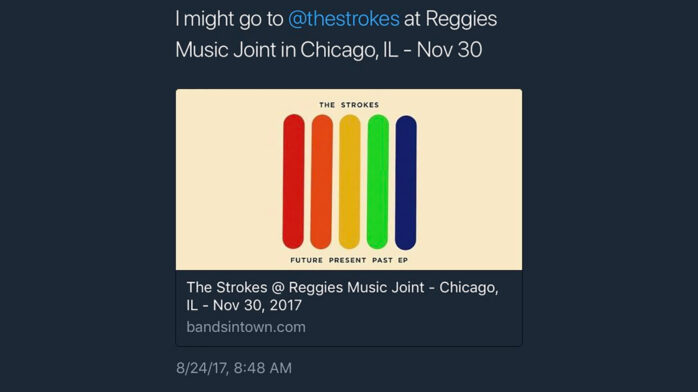 No. The Strokes are not playing a $10 show at Reggies in November. Bandsintown, an app that sends out email and mobile notifications alerting fans when bands announce new shows, made a small error this morning when they alerted people that The Strokes were playing Reggies on November 30th for only $10. People were obviously very excited and the show sold out.

There is just one problem though, The Strokes are not playing Reggies on November 30th for $10, a tribute band called The Storkes will be playing The Strokes album “Is This It” in its entirety. The Reggies website has now been updated, “Note: This is The Storkes not The Strokes playing “Is This It”. Bands In Town has inadvertently auto added the show to The Strokes official website.”

If you were lucky enough to get tickets before the show sold out, congrats! It should be a good time anyway.

This is awkward. @Bandsintown is showing @thestrokes playing on 11/30, but it’s actually a cover band The Storkes. Sorry for any confusion! bandsintown Is This It Reggies The Storkes The Strokes