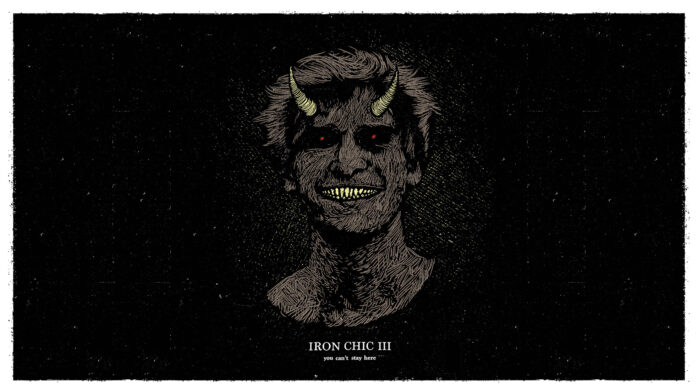 It’s been a rough few years for Iron Chic. Two years after the release of 2013’s The Constant One, the band split with founding guitarist Rob McAllister, who unexpectedly passed away in January 2016. The group channeled their grief and feelings about anxiety, depression, relationships, substance abuse, mortality, life, and death into a new record—You Can’t Stay Here, due October 13 on SideOneDummy Records (pre-order here). We spoke with vocalist Jason Lubrano on Monday of last week about the band’s tumultuous time, and how they arrived at making their darkest record yet.

RF: Today’s a rough day, how are you doing?

RF: I saw that you guys signed with Side One Dummy, but that was a while ago.

JL: It may have been even longer than a year. I forget exactly when we signed, but it was a while ago.

RF: What was the reason for the time from the announcement to getting the record out?

JL: Honestly, the biggest thing was Rob (McAllister, former guitarist) passing. When we’d signed, we were just starting to really put together the idea of recording a new record. We had started a little bit. Rob actually left the band and put a damper on things for a little bit. It was about six months between then and when he passed. That was another blow. There were a lot of hard-to-deal-with things happening all at once, and some weird personal things that were going on. That really was the main thing that put the brakes on for a while.

RF: Was there ever a point when you guys thought you may not continue the group?

JL: No, I don’t think so. Maybe it was a passing thought, but like, we all knew that we wanted to go on. Like I said, Rob had actually left the band and we had a new guitar player at that point. Had he been in the band at the time, that might have been a different story. But, we were already pushing on at that point anyway. This band is a big deal for us. I think we would have made it work regardless.

RF: The record feels heavy with lyrics that deal with loss. It’s kind of relentless. Were you writing songs prior to Rob passing away, or did they all come in a rush after that?

JL: Some of it was written beforehand. I don’t know how many of those songs actually end up making it on the record. Generally, lyrics come last for us. We had music for some, some lyrics come later. It’s a jumble of time—the last a year and a half, two years. It’s hard to keep track of exactly when.

I generally write depressing lyrics, anyway. I had some other things going on during that period. I will say that afterwards it didn’t help lighten the mood at all. It definitely felt a little more natural to be in a darker place at that point.

RF: Yeah—I noticed that. In previous records, it feels like there’s been some moments that feel a little lighter, but this one doesn’t really have that, almost until the end. Was that a conscious decision to make a record from front to back without a letting up?

JL: I wouldn’t exactly say it’s a conscious decision, but I will say that there was a point when it dawned on me, and I just kind of ran with it. I know I have a tendency to write depressing lyrics, so I usually do make a conscious effort to make a note of optimism to counteract it. That was how I felt, and we all felt like that to a degree. It just seemed to fit. But we didn’t say “Oh, we’re going to make a sad record.”

RF: That makes sense. Does the title of the record You Can’t Stay Here have any implied meaning?

JL: It can mean a lot of things for all of us, personally. Just in general, it’s alluding to the fact that no matter what is going on—something bad can happen to you, and you can’t escape that reality. No matter how you’re doing in life, you’re never actually safe from tragedy or injury, whatever it might be. There are definitely deeper layers to that, but it’s a little more personal in some ways. That’s the general idea.

RF: Did you have any concerns or reservations that the bleakness of the record might alienate some people?

JL: I don’t know. It felt right for us at the time. Number one for us—writing music is kind of a cathartic thing. I would hope it doesn’t alienate anybody, but at the same time I think everybody has dealt with loss at some point or the idea of losing someone, or bad things happening in general. I think that anyone can relate to it and like I said, I like to try to throw a hint of something not so depressing in there to balance it out. This time it just seemed right to go with those dark feelings. Maybe some people might think it’s a little too much, but I just have to hope and trust people will relate to it like our other stuff.

RF: Was there a reason you recorded the album at (guitarist) Phil Douglas’s house?

JL: Pretty much everything we’ve recorded, we’ve recorded here. I actually live here now, too. I’m doing the interview from my bedroom. He’s recorded all my bands before this one at some point, and any other bands we’ve been in have recorded with Phil. We try to keep as much of it in-house as we can. I do the art, Douglas does a lot of the booking—especially earlier on—and put out our first record. We always try to do what we can ourselves. We’ve [thought about] going to another studio, but it’s just so convenient to do it here and to be able to take our time, and do it at our own speed. We just end up defaulting back here.

RF: Is the cover art a particular person?

JL: No! it’s just a stock photo of a dude that I found and used for a reference photo. It’s not of anybody famous or anyone we know or anything like that. I do that often—it ends up looking like some celebrity or something. That’s fine, too. But it’s just some random dude.

RF: I’m a professional wrestling fan. I know from an earlier article that you’ve at least talked to the Iron Sheik. Were you guys wrestling fans prior to this?

JL: Yeah, I mean I definitely was when I was younger. I wouldn’t say now so much. I’m not going to deny: I was into it as a kid, fell out of it for a while, and maybe as an older teenager or in my early twenties I got back into it a little bit. None of us are particularly huge wrestling fans as of now. But it was really funny to do that thing with The Iron Sheik. I’m not even sure he even had anything to do with it because it was all through email.

RF: What do you hope people feel from listening to You Can’t Stay Here?

With anything, I do hope it resonates with people. I hope they feel something. I like to keep my lyrics sort of vague and not too specific. I want people to get whatever they want to get out of it. I like for it to be sort of an amorphous thing that anybody from any walk of life can relate to it at that point in time. Hopefully, as their feelings and their situations change, they can get other things out of it.