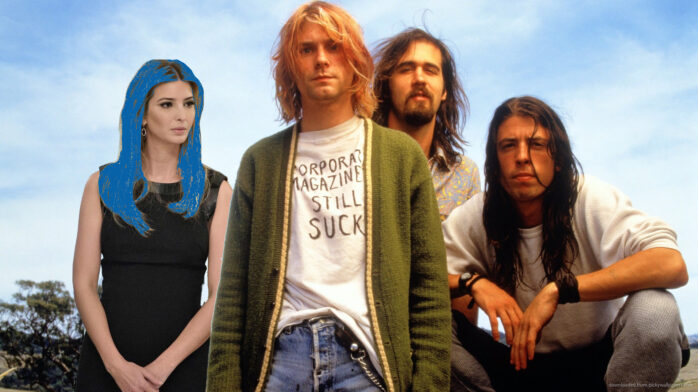 Ivanka Trump Was “Really Into Nirvana” During Her “Punk Phase”

In the book, her daughter Ivanka Trump wrote about her love of flannel shirts, her love of Nirvana, and that one time she dyed her hair blue for one whole day. She calls this her “punk phase”.

“During my punk phase in the nineties, I was really into Nirvana. My wardrobe consisted of ripped corduroy jeans and flannel shirts. One day after school, I dyed my hair blue. Mom wasn’t a fan of this decision. She took one look at me and immediately went out to the nearest drugstore to buy a $10 box of Nice’n Easy. That night, she forced me to dye my hair back to blond. The color she picked out was actually three shades lighter than my natural color… and I have never looked back!”

She also talks about her punk feelings for Nirvana’s Kurt Cobain, “It wasn’t too long after this that Kurt Cobain, the singer, songwriter, and guitarist for Nirvana, committed suicide. It was a shock and I was distraught. Mom had no idea who Kurt Cobain was, and she sympathized only so much. After twenty-four hours of my crying inconsolably in my room, alone—major melodrama—Mom had to pull me out of there to go down to dinner.”