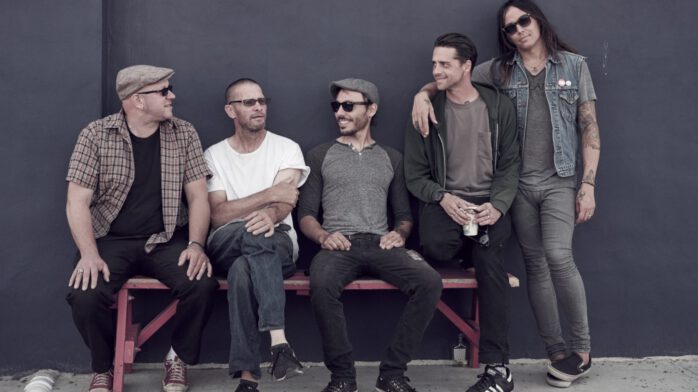 “I’ll tour until I die”: Looking back at two decades of the Swingin’ Utters with Darius Koski

On December 8, melodic-punk tastemaker Fat Wreck Chords will release a mammoth 33-song compilation from Bay Area punk band Swingin’ Utters called Drowning in the Sea, Rising With the Sun. The tracks on the double LP will stretch back to the group’s mid-90s days of yore up to and through its most recent full-length, 2014’s Fistful of Hollow.

To offer nothing more than a comment on the staying power of the veteran bands from the 90s west-coast punk scene would be doing them a disservice. Like so many of their contemporaries, the Swingin’ Utters have become an indelible part of the era’s sound, not only through a hard and fast commitment to their melodic street-punk brand, but also because of how easily their catalog alone could command a $10 bill in a jukebox. In anticipation for their Chicago show tomorrow night (find your tickets right here), we spoke to lead guitarist Darius Koski about the unwavering resolve of the Swingin’ Utters and what it means to be releasing a document of your history as a punk band.

RIOT FEST: Thirty years—let’s never mind the brief hiatus—nine studio albums, and a mass of singles and splits, what keeps the melodic street-punk sound of the Swingin’ Utters alive and vital today? Or rather what keeps you climbing up on that damn stage?

DARIUS KOSKI: I’m not totally sure, actually. We haven’t really ever been able to make a “living” off of it—I mean I’ve had a million day jobs over the years. I guess it’s all we’ve ever wanted to do. We’ve never lost interest in making music together, never lost interest in playing punk rock and touring. We never stopped writing, listening, being interested in the whole endeavor. I mean it’s a fucking grind, but I’ll tour until I die. Traveling and playing music for people in weird places you’d probably never go to otherwise? That’s always gonna be amazing and a privilege to me.

RF: How fortunate (and fun) was it to come up in the early-to-mid 90s amongst a fierce, influential California-bred Fat Wreck Chords roster of bands that included the likes of Good Riddance (also born in Santa Cruz!) and No Use for a Name? Was there a legitimate camaraderie amongst that geographic punk scene?

DK: I think there was a general camaraderie within the punk scene period, but I suppose it’s definitely magnified even more in specific areas (Boston, NYC, San Francisco, East Bay, LA, etc), and it’s always been like that. There was definitely a great camaraderie between all the bands on Fat (and that still exists).

RF: Speaking of Fat Wreck Chords, the giant 33-song compilation Drowning in the Sea, Rising With the Sun drops on the label very soon. How painstaking was it to choose tracks for a compilation of that size?

DK: It was me, Chad [Williams], and Fat Mike basically making lists and emailing them to each other over and over, arguing and debating the merits of whatever songs we were championing. We basically just came to a consensus in the end. I mean, it was hard. I wanted to pick all of my favorite songs, but realized that, in the end, it’s a compilation of our fans’ favorite songs from our catalog. I’m really stoked about it, it’s a total honor, and it looks GREAT. I’ve always wanted a double-album gatefold LP, and here it is! Very exciting.

RF: What tracks from the comp do you feel define specific eras of the Swingin’ Utters more than others? Which, for instance, do you associate most with A Juvenile Product of the Working Class and why? Five Lessons Learned? Poorly Formed?

DK: I think it’s different for everyone, but I think for me, the lead-off tracks on a lot of those records really set the tone and defined what was to come for the rest of the record. So for Juvenile I’d say “Windspitting Punk,” for Five Lessons I’d say the title track, and for Poorly Formed I’d say “The Librarians Are Hiding Something.” They’re all really energetic, and we still play them live at pretty much every show.

RF: No doubt you’ve played certain songs hundreds of times—”Next in Line” comes to mind, for instance—but what cuts from your catalog never grow tired, both in accordance with how you play them on stage and how the crowd reacts to them?

DK: Of the older staples that we play pretty much every night, I still love playing “Pills & Smoke,” “Untitled 21,” “Five Lessons Learned,” and “Glad” is pretty fun too. I actually really enjoy playing just about everything from the Dead Flowers record on. The crowd’s reactions and attitude definitely matters, though. I mean, I don’t really like playing “Next in Line,” but people love that song, and we totally feed on that energy.

RF: Finally, what’s next for a band that just released a double LP that essentially encapsulates its history in punk music?

DK: More of the same! Hopefully another record within the year and more touring. I’m not stopping until I have to.