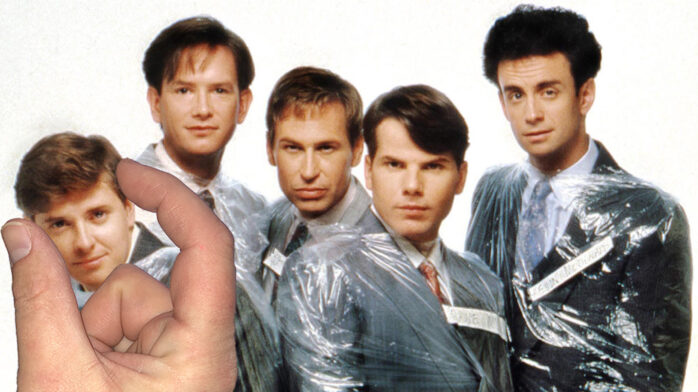 With all due respect to the looming Xennial comedy monolith that is The Simpsons, if you’re a U.S. or Canadian citizen of of a certain age and persuasion, there’s a good chance that Kids in the Hall did more than anything to inform your sense of humor. Airing initially from 1989-1995 on the CBC and HBO, then in reruns on Comedy Central perpetually throughout the remainder of the 1990s, the Kids—Bruce McCulloch, Mark McKinney, Kevin McDonald, Scott Thompson, and Dave Foley—created an essential bridge between the camp and absurdism of Monty Python’s Flying Circus and SCTV and the caustic post-punk irreverence of Mr. Show and Adult Swim. They ruthlessly mocked Toronto’s 80s yuppie business culture which surrounded them, skewered queer stereotypes, and touched on TV-taboo topics like alcoholism, menstruation, and hating jazz (if there’s one Kids in the Hall sketch that’s managed to offend me, it’s McCulloch’s anti-tribute to his least favorite musical genre) with a bemused, sardonic humor that none of their competitors and devotees have ever quite nailed.

On the eve of the release of a new complete Kids in the Hall box set, which collects the entire original series plus 2010’s reunion miniseries Death Comes to Town, we’ve combed the archives for some of our favorites to share with you below. It’s a testament to the show’s brilliance that some—or even all—of your favorites might not be on here, and that we’ve likely forgot many of our own. Hell, if we listed every good sketch here, we’d be here all day, and unfortunately, we have seven things to do today.

Unlike most comedy shows, which take time to find their feet, the first episode of Kids in the Hall finds the troupe hitting the ground with confidence. Though they quickly introduced a series of characters in the first season which would carry over into the series writ large (the Headcrusher, Kathy and Cathy, the Thirty Helens, Buddy Cole), McCulloch’s Eradicator came and went like a breeze (and modeled a super fun band). Then again, maybe that’s for the best: lazier comedic hands surely would have milked dry the concept of a man in a ski mask obsessed with climbing the squash ladder at his local gym. That the Eradicator was a one-and-done scenario speaks to the sheer volume of funny ideas the Kids had at the ready from the start.

THE KING OF EMPTY PROMISES

In a series chockablock with notable quotables, this might be the most quotable sketch of them all, from its first line forward. I, for my part, am incapable of saying the phrase “slipped my mind” without dropping into Kevin McDonald’s laconic drawl.

SICK OF THE SWISS

Nobody does straight guy drag better than Scott Thompson, and nobody does increasingly goofy wordplay better than Mark McKinney, so this one’s a match made in heaven. Despite the best efforts of those dead set against European-style social programs, the dream of turning Switzerland into the world’s punching bag has yet to be realized to this day.

More Bruce, and in top form. McCulloch wasn’t the only Kid rallying against the authority of the patriarchy (see also: “Daddy Drank”), but he did so with a hidden trace of empathy for dads who felt honor-bound to carry on the macho archetype. That added pathos and gravity only makes his dad characters funnier and more believable.

“The King of Empty Promises” notwithstanding, this is Kevin and Dave: Comedy Duo at perhaps its most undiluted; a masterpiece of breakneck rhythm and comedic left turns. It’s so sharp and wacky in its back-and-forth, you don’t even notice how dark it is at first.

This one’s proof that the Kids were brilliant even when they were half-assed and folding in on themselves. Both a critique of lazy sketch comedy and a meta-commentary on their own shortcomings, “Premise Beach” was a perfect clearing house for those ideas which were unshakable, even if they knew that they weren’t actually that good.

Picking one Buddy Cole monologue isn’t really fair: after all, the key to comedy is repetition, and it’s the tics that Scott Thompson works into the character that make him funnier over time. Still, if one must pick, this is the first one where the stories really start to go off the rails, hinting at the life of adventure Buddy lives when he’s not keeping his barstool warm.

If you’ve ever set foot in a record store, this sketch requires no further commentary.

Comedy Kids in the Hall