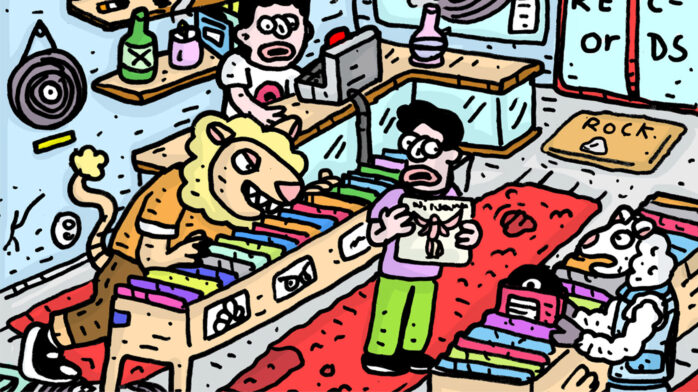 People who blather on about the weather for lack of anything more interesting to say are worth avoiding at all costs.

But we can be more forgiving when it comes to March, a month that (for those of us who live in regions with actual seasons) famously “comes in like a lion and goes out like a lamb.” It’s in that spirit that we champion six sweet 90s albums that start off hard AF, then reward you for surviving the onslaught with what comparatively amounts to a lullaby. Unlike too many of his contemporaries, Trent Reznor held his own against the specter of addiction, and is still alive and kicking. That said, it’s hard to picture swole, clean-livin’ Trent convincingly pulling off what rubber-shirt-and-fishnets Trent did on “Mr. Self Destruct,” the unhinged opener to The Downward Spiral. From the synthetic sub-whippin’ to the in-the-red chorus, the mechanized insanity defies denouement… courtesy of Adrian Belew’s insane, dizzying, looped guitar outro.

While the entire album is dynamic — staggering from Broken-esque rants like “March of the Pigs” to the troglodyte simplicity of “Eraser,” The Downward Spiral famously ends with “Hurt.” We all know Johnny Cash made it his own just a year before he passed away [Author’s Note: changing “crown of shit” to “crown of thorns” will always be some straight-up bullshit] [Editor’s Note: I respectfully concur], but Reznor’s original is the ultimate self-loathing summation of everything that came before. Granted, “Hurt” does give you that out-of-nowhere, climactic explosion, but it’s still very lamblike. As in, “that awful screaming of the lambs.” You don’t have to be a snooty audiophile to hear the difference between Scott Litt and Steve Albini’s mixes of Nirvana’s swansong. However, you do have to be a snooty audiophile to argue that Litt’s version is an unlistenable piece of glossy corporate shit. In both forms, “Serve the Servants” barrels so recklessly out of the gate that if caught off-guard, even the most nimble toreador could very well soil his pantaloons. The sonically crisp chaos of In Utero‘s lead track is shares space with a dissonant solo that perfectly complements the seasick riffage, as well as some of Kurt Cobain’s most prescient lyrics:

Like The Downward Spiral, Nirvana’s third studio album is a deeply diverse auteur statement, and as a coda, “All Apologies” was unsettling…  even well before Kurt’s suicide. The album version eventually erupts with noisy distortion, supplying an ironic fist-pumping quality to the “Married / Buried” refrain, but the below MTV Unplugged in New York version sucks out all the fake fun, supplanting those arena-ready guitars with Lori Goldston’s funereal cello. This is a death jam, pure and simple — perfect for a rebirth-friendly, spring-themed post! People were generally pretty psyched on a Smashing Pumpkins classic-lineup reunion, but Billy Corgan just derped a slam dunk. We should be psyched because such a reunion would surely portend a ton of Siamese Dream songs, and that album — like Gish before it — is pretty much perfecto (other than “Disarm,” which kick-started the awful trend of alterna-rock singles with backing strings). There’s none of the prog-snob hubris and pseudo-poetry that marred even mostly-solid efforts, like successor Mellon Collie and the Infinite Sadness… it’s all good!

“Cherub Rock” is Corgan at his most self-aware, believe it or not. Aside from Tool’s “Hooker With a Penis” and Mudhoney’s “Overblown,” no other early-to-mid 90s alterna-jam was more spot-on in its commentary about all the selling out that was going on at the time.

All the while, the song is massive and damaging. Jimmy Chamberlin’s extraordinary jazz-inspired fills kick the train into gear… and continue to keep everybody on track throughout. Corgan’s inspired verse riff is outdone only by the way he makes his guitar scream in ways we’d never heard before during the solo, as well as one of the most memorable queries in all of the alterna-radiosphere:

Who wants honey,
As long as there’s some money?

Conversely, the Siamese Dream rollercoaster coasts back into the station with the gorgeously dreamy “Luna,” in which banal sentiments like, “I’m in love with you / So in love” come off as heartbreakingly genuine. Did everybody just, like, forget about “Somebody to Shove?” Maybe it was Soul Asylum frontman Dave Pirner’s white-bro dreads; maybe it was his romantic dalliance with Winona Ryder; maybe it was the annoying ubiquity of the missing-kids video for breakthrough single, “Runaway Train.”

No matter which line of lame, shallow gibberish is spewed by motherfuckers acting like they forgot about Pirn, there is still no denying that “Somebody to Shove” is one of the most underrated singles of the 90s. Pirner’s shrieking guitar lead gives way to a tension-building verse; which builds into a universally relatable chorus:

I’m waiting by the phone,
Waiting for you to call me up and tell me I’m not alone

Grave Dancers Union was the closest that the Twin Cities’ Big 3 of the 80s got to capturing the zeitgeist, and while Soul Asylum aren’t generally remembered as fondly as the Replacements or Hüsker Dü, the band hit a working-class sweet spot on its sixth album.

“The Sun Maid” offers a super wack AA/BB rhyme scheme — plus some brutal adult-contemporary strings — but Pirner is at least coming at it from a pure-ish place, telling Rolling Stone in 92, “At one point you have to say: ‘I’m not angry 24 hours a day. I don’t feel like screaming all the time. There are other emotions on my life that I should give some credence to.’ ‘Sun Maid’ is a beautiful thing, and it’s my ultimate ‘fuck you.’” Fuck you too, Pirn. Fuck you too. If you have a friend who’s cool enough to punch Sunny Day into the jukebox in 2018, they’re probably gonna go with “In Circles,” the second song on Diary. The ringing two-note lead and staccato breakdown are enough to (understandably) make it the group’s most enduring and popular song. Others would say that “Seven” (which was actually the first single and video, the latter cementing the iconography of their use of Fisher-Price figurines) explodes from the get-go. One of the great debates of 90s alt-rock is whether Dave Grohl was wrong to boot drummer William Goldsmith from Foo Fighters (he joined up after Sunny Day Real Estate’s first dissolution, following 1995’s self-titled “pink” album, and lasted from the Foos’ debut to just two songs on Grohl’s breakout breakup record, The Colour and the Shape).

Whatever your perspective is, there’s no denying that Goldsmith’s athletic, creative, and tasteful fills drive this song.

“Sometimes,” on the other hand, is the kind of solemn, self-effacing confessional that would be reclusive frontman Jeremy Enigk’s bread and butter (it blows up for the last 90 seconds, but it’s not the only cheat on this list, as you’re about to see). It’s understandable to misremember that this album did not, in fact, open with “Cannonball.” Kim and Kelley Deal instead went with the short, sweet, and sloppy “New Year,” which encapsulates everything they can do and then some in under two minutes: A dirge-y 48-second intro implodes into discordant feedback, punishing drums, and disquietingly sweet harmonies that lay a blueprint for the rest of this sophomore sensation:

I am the sun,
I am the New Year

Cheating a little, let’s ignore the way-cool “Roi (Reprise)” and say that “Driving on 9” is Last Splash’s true closer. For all the radical shit that happens on this record (“Divine Hammer” and “Saints” are mega-hits in a much better parallel universe), “Driving” uses elegant ukulele and fiddle augmentation as a paean to one of the great songwriting tropes: appreciating the journey, not the destination.