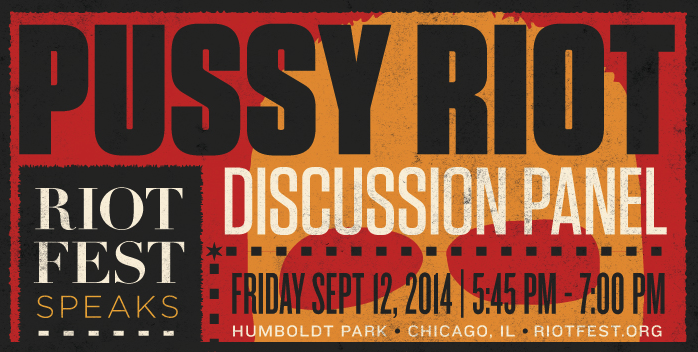 To add to the Riot Fest 10-year anniversary festivities, we are very excited to detail the much-anticipated Pussy Riot Panel as the inaugural installment of the Riot Fest Speaks series. This unique panel will take place at Chicago’s Riot Fest on Friday, Sept. 12 on the Riot Fest Speaks stage and will bring together a collective of progressive minds to discuss sociopolitical movements, music and art, and the cross-pollination between the two that generates changes in the traditional soliloquy of thought and action.

The panel will be moderated by Henry Rollins who will lead the panel consisting of Nadya Tolokonnikova (Pussy Riot), Masha Alekhina (Pussy Riot), Greg Graffin (Bad Religion, Vocalist/Professor or Geology at UCLA), Tim McIlrath (Rise Against), Marcelle Karp (writer/activist), Michael A. Petryshyn (Riot Fest, Founder). Not to interrupt the fun festival environment, the panel will be conducted in a casual manner and is sure to be both entertaining and thought provoking.