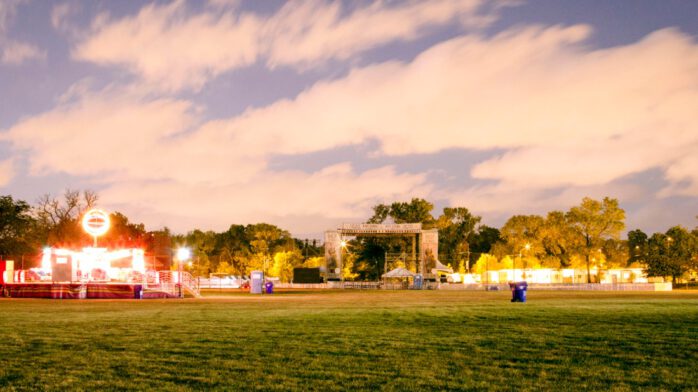 And finally, Monday is Alderman Maldonado’s Ward Night. Please, stop by, sign in, and let him know personally that you support Riot Fest remaining in its Humboldt Park home.

To clarify the record on the repairs to Humboldt Park, Riot Fest released details of the projects and initiatives that have been in progress since the conclusion of Riot Fest 2014. There have been statements released in the past week that inaccurately portray the entire restoration project and a photo gallery is now available for viewing the current state of the park [view HERE].

After multiple walk-throughs with Chicago Park District supervisors and project managers, Chicago Park District staff has continually expressed approval of the progress made thus far.  Unfortunately, Alderman Maldonado nor any of his staff have been able to attend any of these walk-throughs or meetings, and he did not express any concerns with the work with Riot Fest until late last week via an article in Redeye.  Even with that, Riot Fest is pleased to report that the ball fields are now green and approved for use for the 2015 Spring Leagues.

Going forward, Riot Fest will continue to work with their partners in the community and in government to address the issues and bring additional resources to enhance the beauty of Humboldt Park.  As Riot Fest discovered, these areas of the park have had drainage problems for years (well before Riot Fest launched in Humboldt).  These infrastructure issues have been caused by numerous factors, including improper disposal of grease into park drains by truck vendors, resulting in major clogs of sand, gravel and grease that coagulates into a cement-like mass.

Riot Fest also agrees with the Humboldt Advisory Committee’s (HPAC) assessment of the situation.  Per HPAC’s minutes from a recent board meeting:  “Members unanimously agreed the overall infrastructure (drains/pipes, etc.) of the Park need to be addressed. Additionally, members universally agreed the Chicago Park District has a responsibility to provide a better location and layout within the Park to Riot Fest 2015 as well as should distribute revenue directly from the Riot Fest special events permit back to Humboldt Park.”

“To be honest – and I’ve been telling everyone this since November – Riot Fest’s cleanup and restoration has made the park better,” said Abel DeJesus, vice president of the Puerto Rican Parade Committee, who hold their long-standing annual June event in Humboldt Park.  “Both ‘Tito’ [Angel Medina, president of the Puerto Rican Parade Committee] and I have personally witnessed and seen the amount of work that has been put in, so I’m not really sure why the Alderman [Roberto Maldonado] is creating such negativity in the community because even as this past weekend, I had people coming up to me saying that the park is in good shape.  And that’s great for us because our event in coming up in June.  Riot Fest has been really good in taking care of the park and neighborhood and, more importantly, they’re respectful.”

Below is a list of the work done last fall and underway now that Chicago’s weather has finally improved. A photo gallery is now available for viewing the current state of the park.

Once the ground thawed in mid-April, a walk-through with officials from CPD and Riot Fest landscaping contractors identified additional areas of work, which was immediately scheduled.

Riot Fest has delivered everything promised and more, in an effort to correct damage from festivalgoers during a major rain event the first day of the fest, as well as to generally improve the park for residents to enjoy. Riot Fest has invested  $152,000.00 in the project thus far and is 100% committed to covering all necessary improvements going forward. At this juncture, the estimate for further improvements stands at $30,000.00.

Park restoration after a large event is common. For example, Lollapalooza’s restoration of Grant Park in 2011 caused huge swaths of the park to be unusable to residents and caused some parts of the grounds to be closed for almost an entire year.  2014 damage to Grant Park cost $266,000.00.  As Chicago Park District spokesperson Jessica Maxey-Faulkner stated to the Chicago Sun-Times in an April 30, 2015 article, “the park damage and follow-up repairs to Humboldt Park are no different with what happens every year at Lollapalooza.”

Moreover, Riot Fest has been preparing plans and dedicating additional resources to ensure that the damage of 2014 will never be repeated again. Those plans include:

“I think we learned a valuable lesson this year. Moving forward, we must have our Chicago Park District-approved landscaper on-site with us from load-in to load-out. We need to get ahead of any issues and start repairs immediately, if need be,” said Michael A. Petryshyn, founder of Riot Fest.  “Sometimes you have to directly look at yourself and ask how can I do better? What we’ve done in the past is just not good enough. Is there a better process currently not being implemented in the standard repair procedures we follow by the Chicago Park District?  Yes, there is… that’s getting ahead of the repairs and simultaneously try and prevent them from happening to the best of our abilities.”

“As evidenced by all of the photos taken this weekend, it’s clear that the damaged areas have been addressed and are being used by residents; however, moving forward, our duty is no longer reseeding and maintaining” continued Petryshyn. “Riot Fest will always repair what has been damaged.  That has never been in question.  As previously stated – upon the formation of the Riot Fest Foundation – it has become RFF’s job to raise funds to help fix infrastructure issues within the park because of state and city budget cuts.  The Riot Fest Foundation will certainly take on that project with the main goal of beautifying the park.  To me, that’s how this relationship becomes stronger.”