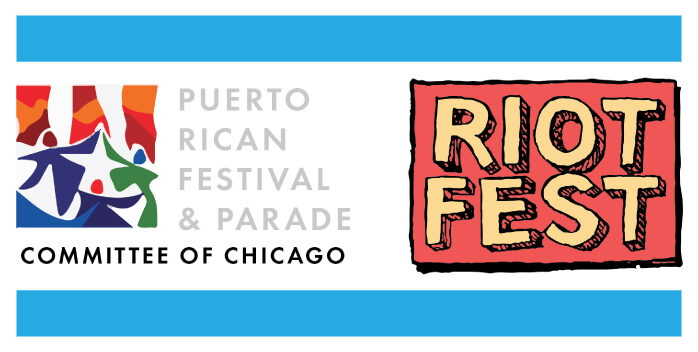 The Puerto Rican Festival & Parade Committee and Riot Fest – in a strong and public sign of unity – have joined together to issue a joint statement that they have come together as one in an effort to combine resources, ideas and future community undertakings for the betterment of the 26th Ward and Humboldt Park. Moreover, they want to dispel false preconceived notions by a fanatical few about their neighborhood and promote what they describe as “one of the most historic and culturally rich neighborhoods” in Chicago.
Alongside other neighborhood groups, associations, residents and businesses, both the Puerto Rican Festival & Parade Committee and Riot Fest are building a cooperative platform where the true voice and tone of Humboldt Park is heard and not stifled by officials who do not represent the needs and concerns of the community.
Angel “Tito” Medina and Abel DeJesus of the Puerto Rican Festival & Parade Committee alongside Michael A. Petryshyn and Sean P. McKeough of Riot Fest have been working on these plans since late last year when the idea was first discussed during a discussion between both event organizers about some of the infrastructure issues within Humboldt Park, the home for both of their annual events.
“Initially, the conversation started about identifying all of the broken benches, drainage issues that has caused substantial damage to roads, walkways and obviously the inability for water to drain from the fields within the park,” stated Michael A. Petryshyn, founder of Riot Fest. “But, then it turned to how could we work together and make our community one that others look up to and even possibly replicate. I have a lot of respect for Tito and Abel and everything they have done, and more importantly, what their festival means to our neighborhood. And for them to want to work jointly alongside us is an honor because the festival they represent has such a rich tradition because not only is this festival a torch-bearer in terms of being one of the longest standing festivals in North America but it has something that most festivals do not: a soul.”
Even though a joint statement has never been issued, Riot Fest and the Puerto Rican Festival & Parade Committee have been working together since Riot Fest first came to Humboldt Park in 2012. And since then, the relationship has grown and become stronger with each festival cycle, according to both festival producers.
“Riot Fest has done a lot of good for this community. Mike and Sean do nothing but give and try to do right by everyone,” said Abel DeJesus, vice-president of the Puerto Rican Parade Committee. “I know for a fact that supporting good causes and things important to the community is what gets Mike up in the morning. Not a day goes by where he doesn’t call me with an idea and say ‘wouldn’t so and so be cool dude. And yes, he calls me dude,” laughs DeJesus.
Since 2012, Riot Fest has donated over $370,000 to not-for-profit organizations with $249,000 going to charities within the 26th Ward, such as Puerto Rican Cultural Center, the National Museum of Puerto Rican, Arts & Culture, Puerto Rican Coalition and many more. And Riot Fest has also been a proud sponsor and strategic partner of Puerto Rican Festival & Parade since 2012.
The Puerto Rican Parade Committee and Riot Fest are planning an event to unveil specific plans to demonstrate a true coalition within the community (full details to be announced shortly) and what plans/events they have for remainder of the 2015. This event will welcome all residents who want to hear more about their collaborative efforts and share their main mission going forward:
“Our message is simply about cooperation, friendship and unity and certainly not segregation or division,” said Petryshyn. “Our festivals are important to this in different ways, but, in the end, there is one principle that ties us all together: we love our community.”