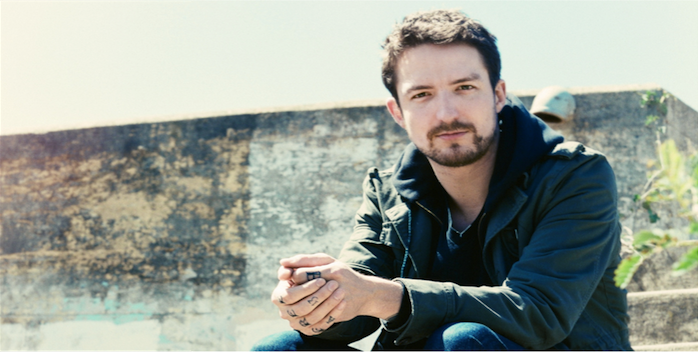 Folk, punk, and politics have been synonymous since The Pogues blasted off the British seams in the early eighties. The concept of mixing traditional mainstream acoustic music with radical leftist lyrics has inspired a musical subgenre sustained by The Violent Femmes, Against Me!, The Menzingers, The Gaslight Anthem, and a bunch of other bands who are completely irrelevant because they are yet to play Riot Fest.

So can rock and roll actually save you? Just ask this week’s Riot Fest Spotlight Artist, Frank Turner, whose 2015 album release Positive Songs for Negative People explores this very idea. The British folk-punk singer will perform the Toronto Riot Fest location with his full band under the moniker Frank Turner and The Sleeping Souls.

Frank Turner first experimented with music during his high school days in an alternative band called Kneejerk. In the midst of releasing three records and touring the UK, he went on to attend Elton College, an all boys school that a boy named Prince William also happened to attend. During this period Frank Turner joined post hardcore group, Million Dead, and reached some level of fame, playing music festivals and opening for bands like Finch and Cave In.

In 2005, after four years of creating impassioned punk songs and screaming in a Cedric Bixler-like fashion, Frank Turner became the folk-punk solo singer we know him to be today.

Most of what you need to know about Frank Turner can be found in the lyrics of “Photosynthesis”, an earlier track off his Love Ire & Song album. “Photosynthesis” is about how the societal norms that sometimes come with marriage and mortgages just aren’t for him. “I won’t sit down and I won’t shut up, and most of all, I will not grow up”, he repeats over and over in the song’s liberating chorus.

Frank Turner and The Sleeping Souls is one of those bands that kills it live every single time. In fact, if you don’t want to fall in love with Frank Turner, then it may be best to avoid seeing him altogether… But if you do take the leap, once you’ve stepped inside, there’s no going back.

You might fall in love with Frank Turner for his positive message, for his infectious acoustic melodies, or if you’re admittedly shallow, you might just fall in love with Frank Turner’s tattooed body and dashing good looks (hey, I did). Whatever it is that does it for you, there’s certainly something about Frank Turner that makes everyone, and I mean everyone, including the random drunk mom, who was simply searching for Riot Fest’s token piña colada pineapple stand and accidentally stumbled into a circle of human rights activists, to sing along to every word.

To date, Frank Turner has created six studio albums, and is currently on an expansive world tour spanning the UK, America, and Denmark in promotion of his latest album, Positive Songs For Negative People, which was released on August 7th, 2015. The first single off the record is called “Get Better” and is among the many action driven songs that the scruffy faced English singer may play at this year’s Riot Fest & Expo in Toronto.

Sample lyrics: I’m trying to get better because I haven’t been my best/ She took a plain black marker, started writing on my chest/ She drew a line across the middle of my broken heart, And said: “Come on now, let’s fix this mess”/ We could get better, because we’re not dead yet.

Watch the video for “Get Better” here: https://www.youtube.com/watch?v=tB4Avdlz3lk

5 Fun Facts You Might Not Know About Frank Turner

3) In March of 2015, Frank Turner released The Road Beneath My Feet, an autobiographical book about sleeping on floors and what it’s really like being a touring musician.

4) Frank Turner designed his own beer and named it “Believe Beer”. It’s a wheat ale with 4.8% alcohol content. You can learn more about it here.

5) Frank Turner has a fascination with maps and flags; he even has a game on his website encouraging his fans to get a flag from one Frank Turner show to the next without his help.

What to Expect at the Show: A tattooed British man and his band of Sleeping Souls getting the crowd buzzed off Frank Turner’s somewhat universal yet somewhat controversial beliefs.

For fans of: Billy Bragg, The Clash, human rights, pints of Guinness, not paying rent on time