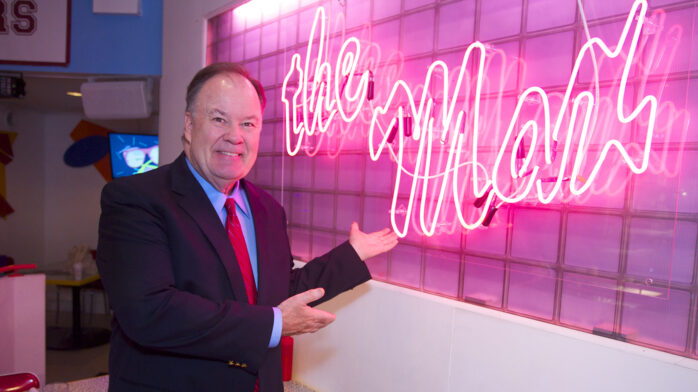 “Well I could run and hide but what’s the point, I get so much love and affection and kind things said to me it’s like a standing ovation all the time. The good news is when you get type cast it’s because you did a good job.”

Dennis Haskins played Richard Belding for eleven years. From the first episode of “Good Morning, Miss Bliss” in 1988, until the last episode of “Saved by the Bell: The New Class” in January of 2000, Haskins was America’s principal. He doled out life lessons and bad jokes for the students (well, six of them, anyway) at the fictional Bayside High School every Saturday morning.

The show was conceived by NBC network head Brandon Tartikoff. Before his passing in 1997, Tartikoff was a huge proponent of the kind of entertainment mixed with helpful advice for young people that SBTB offered up. His daughter wanted to watch something on TV that wasn’t “a roadrunner dropping an anvil on a coyote.”

Enter Haskins. He was the perfect man to play the goofy and well-meaning Principal Belding. He had a great rapport with the young actors opposite him, and says that really shaped the relationship between his characters and theirs.

“Yes, he was principal, but he also treated the kids with respect. He loved them.”

We talked about “Saved by the Bell” at a table inside “Saved by the Max,” a pop-up restaurant in Chicago’s Wicker Park neighborhood (and yes you still have time to get a reservation). A portion of the buzzed about restaurant is a replica of Mr. Belding’s office, complete with a copy of his college diploma, and a framed photo of Mrs. Belding and their baby son Zachary (named after Belding’s favorite student/arch nemesis, Zack Morris, played by Mark-Paul Gosselaar).

“When I walked in, my jaw hit the ground. [The role] was a blessing. It was the role of a lifetime, and it’s still paying off 26 years later. I mean, you’re here. The Max is here. And I’m sorry, but I keep getting distracted by the episodes playing behind you.”
Although distracted in a good way, Haskins still remembers all of the details and the behind-the-scenes stories from those reruns playing behind him.

“They didn’t want the kids to chew gum on camera, and you see that door? On set, that’s where we’d enter the diner, so right before their cues, the kids would take out their gum and stick it on the wall on the opposite side of that pay phone. So, when we wrapped, I kept the name plaque from my desk, and someone cut that phone out of the wall and gave it to me with all of that gum stuck to the back! It’s gross, but it was a ritual that I always thought was so funny!”

Dennis Haskins has a million stories: how Screech’s robot almost accidentally blew up Johnny Carson, the one time he made Mick Jagger laugh, and how he and Anthony Anderson are equally loved in the city of Compton. But, his favorite stories are about how much so many different kinds of people still come up to him and tell him how much they loved the show.

“Black, white, red, yellow, everyone loved “Saved by the Bell.’ We didn’t really ever talk about race, so everyone could see themselves in these kids. My agent told me that I could either run away from Belding, or embrace him. And I’m so glad that I chose the latter. I feel like I’m living in one great big standing ovation every day.”

While Belding always seemed to ponder “What’s going on here? ”– Haskins really seems to have it figured out.
“I’m blessed…I don’t do it for the money, but because I love it.”

Jill Hopkins is the host of The Morning AMp – Vocalo’s news, culture, and talk show – every Monday through Friday from 8-10am on WBEZ 91.5 Chicago.