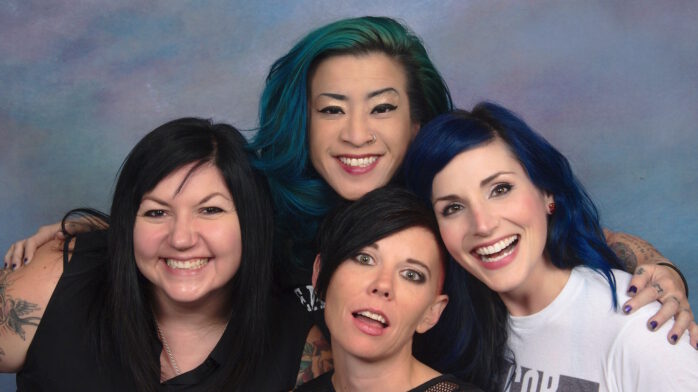 Bad Cop Bad Cop is one of the most exciting pop-punk bands to emerge out of California in recent years. Comprised of guitarists/vocalists Stacey Dee and Jennie Cotterill, drummer Myra Gallarza and bassist/vocalist Liln Le, the band’s high-energy, harmony-laden music nods to ‘90s punk and ‘80s pop bands, celebrates good times, and confronts social issues head on with positivity and tongue-in-cheek humor. Bad Cop / Bad Cop released its debut full-length, Not Sorry on Fat Wreck last year and is gearing up to hit the studio to record a new album for 2017. First, they’ll play Riot Fest & Carnival on Friday, September 16.

Read on for Stacey Dee and Linh Le’s answers to our 10 Questions:

Linh Le: Man I don’t exactly know the very first album I bought, but I know that Cro-Mags’ Hard Times in an Age of Quarrel was definitely one of them.

SD: The Go-Go’s. I saw them when I was 6, seeing Jane play guitar and sing made me realize that was what I was gonna do when I grew up.

LL: The Bangles. I wanted to be like them so bad.

LL: Cinderella. I was staying the night at a friend’s house when I was young and her parents wanted to take us to see Cinderella and weren’t able to find a sitter. Both my parents and I were fully under the impression that I was seeing something Disney… it was mind blowing

LL: For reals… pretty sure Jennie got us all addicted to hard boiled eggs with some paprika and mustard.. that shit is legit.

SD: The Power of Now by Eckhart Tolle (I’m still reading it but it’s life changing).

LL: Spare t-shirt. you can use as a replacement shirt, towel, make shifty poncho, flag, bandana, hanky, etc… so versatile.

SD: Positivity! If people made the decision to be happy and positive, this world way be a way more tolerable place.

LL: Equal rights across the board. Period.

SD: I’d swim in the morning then spend the rest of the day with my family and pets… Telling them over and over how much I’ve appreciated living my life with them.

LL: a get together at the beach with all my friends and family and pets… and blasting REM (kidding).

SD: Impossible to answer, but Over The Rainbow is a good one.

LL: for me, it would be “Tom Traubert’s Blues” by Tom Waits