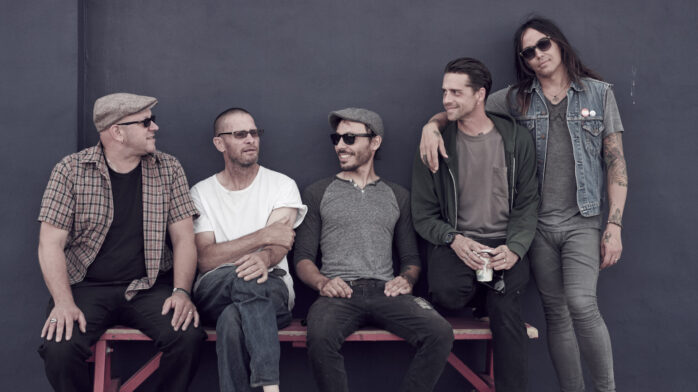 Swingin’ Utters have been mainstay in the punk community for nearly three decades. Having emerged out of the San Francisco Bay Area in the late, ’80s, by the time of their 1995 album The Streets of San Francisco, they turned the hearts of critics and fans alike for their infectious blends of traditional, working class punk, country, and roots. Since then, they’ve maintained a policy of pushing the bar and never doing the same thing twice,  incorporating varied and unexpected influences and sounds from record to record, most recently on their 2014 Fat Wreck Chords release, Fistful of Hollow.

With Swingin’ Utters heading to Chicago to play Riot Fest & Carnival on Sunday, September 18, we asked guitarist/vocalist/accordionist Darius Koski and lead vocalist Johnny “Peebucks” Bonnel to answer our 10 Questions. Read on for their unusual preferences in snack foods, excellent choices in literature, and more.

DK: The Beatles. The first album I listened to (over and over and over again) was Magical Mystery Tour. They were the first band I was really actively aware of, and nobody comes all that close to them to this day (for me at least).

JB: The Clash. The way the Clash combined many different kinds of music and experiments with studio sound was true art. Having Bo Diddley and Lee Dorsey open on their tours was great. They never forgot their influences and wanted to show the world why they do what they do. It’s very respectful and beautiful.

JB: My brother took me to see The Kinks at Berkeley Greek Theater.

JB: The Pears at The Hemlock in SF.

DK: Alcohol is my favorite snack.

DK: The Idiot by Dostoevsky.

DK: Drink water? I don’t actually tend to go to festivals unless I play them.

JB: Compassion for people and environment.

DK: I’d probably like to have sex, but that’d be some heavy shit to deal with, so would that even be possible? Who knows. Although it’d be a situation where you might want to be somber, sober and reflective, I’d most likely get really, really fucked up.

JB: Spend the rest of the time with my wife and daughters.

DK: It could be a different answer every day. Today I’ll say [The Kinks] “Waterloo Sunset.”