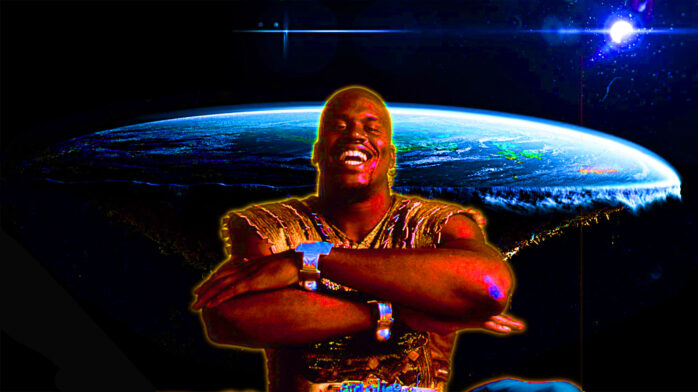 Shaq Thinks The Earth Is Flat

What is a ‘flat-earther’? A person who believes that despite all facts and evidence and science that prove the earth is spherical in shape, that the earth is actually flat.

Yes, that’s a real thing people believe. In fact, “The mission of the Flat Earth Society is to promote and initiate discussion of Flat Earth theory as well as archive Flat Earth literature. Our forums act as a venue to encourage free thinking and debate.”

The website continues, “The Flat Earth Society mans the guns against oppression of thought and the Globularist lies of a new age. Standing with reason we offer a home to those wayward thinkers that march bravely on with REASON and TRUTH in recognizing the TRUE shape of the Earth – Flat.

Come join us in our forums and get started learning about the greatest lie ever told.”

Basically, ‘flat-earthers’ believe the earth is flat and there is a massive worldwide conspiracy between the government, NASA, shadow organizations, and lizard people probably, to keep the truth hidden.

So what is Shaq’s proof that the earth is flat? When he drives between Florida and California, “it’s flat to me.”

On a recent episode of his podcast. Shaq laid out his ideas, “So, listen. I drive from coast to coast and this sh*t is flat to me. I’m just saying,” … “I drive from Florida to California all the time, and it’s flat to me. I do not go up and down at a 360-degree angle, and all that stuff about gravity. Have you looked outside Atlanta lately and seen all these buildings? You mean to tell me that China is under us? China is under us? It’s not. The world is flat.”

So there you have it. Shaq thinks the earth is flat.  You can listen to the rest of Shaq’s theories below.