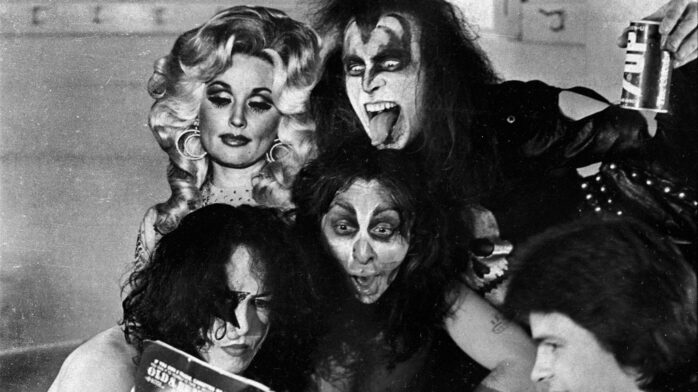 The band KISS was a big fan of Dolly Parton, and when the song “I Will Always Love You” was released in 1974, Ace Frehley asked Dolly Parton if they could record a version of it for Hotter Than Hell, their second studio album. Dolly went to visit KISS in their studio in August of 1974 to watch them record it (the photo is from that 1974 studio visit). Unfortunately, the song was cut from the album. While she was at the studio, Dolly did help write the lyrics to ‘Hotter Than Hell’ with Paul Stanley, but didn’t want to be credited for fear of alienating her fan base. Rumor has it that one of Dolly’s tattoos is a KISS logo.

Paul Stanley and Dolly Parton became good friends after the recording session and became pen pals for almost 20 years. On rare occasions, Dolly actually covers the song ‘Hotter Than Hell’ at her shows. When KISS wasn’t touring, Paul would often go to Dollywood after the park was closed and ride the Mountain Slidewinder water toboggan ride all night. Sometimes staff members would have to stay until sunrise while Paul rode the Sidewinder over and over. It’s said the song “Reason to Live” was inspired by Paul’s late night toboggan rides at Dollywood.