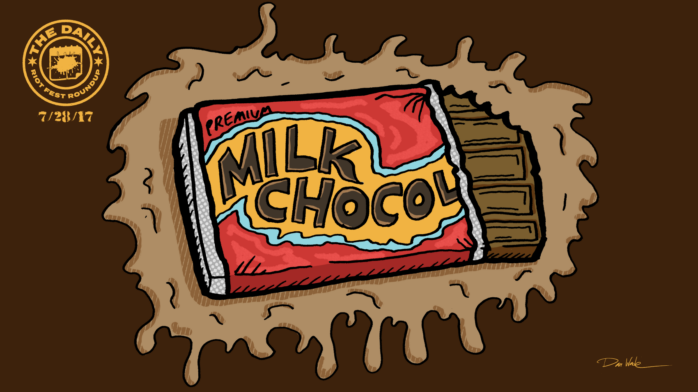 Manchester Orchestra released a new album today! Listen to all of A Black Mile to the Surface below, if for no other reason, you’ll have a leg up on the other punters during the singalongs when Manchester Orchestra plays at Chicago’s Concord Music Hall on September 24th! More information on that show is available here.

There was a major late-night coup the other night, when Slayer played “Raining Blood” on The Tonight Show Starring Jimmy Fallon.

From the “Never Would’ve Guessed That!” department, Jaden Smith stars in Fall Out Boy‘s new video! Check out “Champion” from the band’s new album, M A  N   I    A.

Happy 3rd birthday to Lese Majesty, the second album from Shabazz Palaces. It came out on Sub Pop on July 28th, 2014, and we think this is cause for celebration. “Cake,” anyone?

In case you missed the pre-sale, tickets for Beach Slang‘s fall tour are on sale to the public now.

PS: Blacked out cities TBA as soon as allowed.https://t.co/KT3i9IE1V5 pic.twitter.com/0IiACaNs82

Josh Berwanger from Radar State and The Anniversary has some thoughts about some things.

Our Around The World And Back DVD is now available on @iTunes for only $7.99! https://t.co/3VGTnpEdLV pic.twitter.com/OGk5OQl5Qj

The Ataris‘ Kris Roe and his dog have some feelings about that sign in the back.

Touche Amore wants you to guess what their new test pressing is.