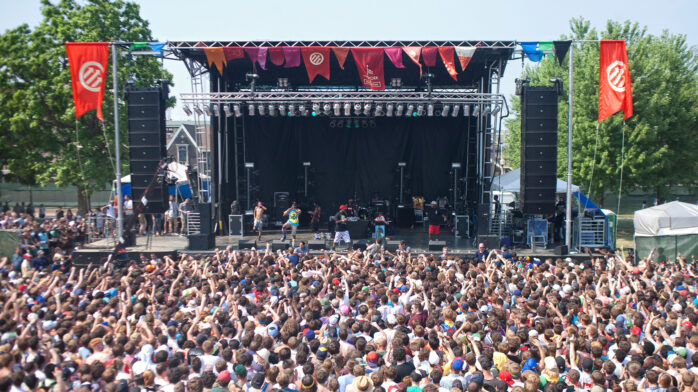 As our brethren at Pitchfork Music Festival begin their annual mid-July preparations at Union Park, the Riot Fest staff has been carefully looking at the Pitchfork lineup in anticipation of another great weekend in Chicago.

And although the Riot Fest staff has a wide array of musical preferences, Pitchfork (July 14-16, Union Park, Chicago, IL) is one of the few festivals we all attend and enjoy.

LCD Soundsystem is dance music for people who don’t like dance music, but they’re also a whole lot more than that. They’ll lift you up and they’ll bring you back down, often times all at once. Aside from the mishmash of complexly melancholic-yet-uplifting songs throughout their catalog, take LCD’s (kinda) reunion announcement as a remnant of this dichotomy.

On December 24, 2015, frontman James Murphy posted a new standalone single—the first from the group since its 2011 hiatus. Great news indeed to fans everywhere, but boy is the song sad! It’s called “Christmas Will Break Your Heart,” and as great of a song as it is, it is a bummer! Still, it perfectly captures everything that LCD Soundsystem had been, and served as a beacon of hope for fans who thought their chances to see the group perform live may be behind them. The reunion was confirmed a few days later when the band was announced for Coachella’s 2016 festival, and more reunion dates soon followed.

With more new material now on the way, I wouldn’t want to miss their return to Chicago.

Madlib’s beats are the aural equivalent of a dream. There’s something about his music that seems as if it’s almost real, but not quite. But even in their hazy, sonic existence, his beats are unmistakably his. You can recognize a Madlib beat within the first few seconds of hearing it; whether it’s on his solo work as Quasimoto, with J Dilla on Champion Sound, with MF Doom on Madvillainy & Madvillainy 2, with Freddie Gibbs on Piñata, or on literally anything else he’s done. A Madlib beat is a Madlib beat.

For the casual rap fan, Madlib’s set might not be what you’re expecting. It will primarily be what one could describe as “instrumental.” He doesn’t really have “hits” or “club bangers,” but his beats are undeniably cool. If you’re not watching Angel Olsen (it’s Chicago, and you’re a hipster, so you will be), I highly recommend wandering over to the Blue Stage and checking out a set that’s guaranteed to please!

Also, Madlib’s set might be the only time I smoke in public this year, so if you see me please buy me tasty snacks. Beer works too.

With its conspicuously clever lyrics, unabashed political content, and deep geographical ties to his hometown of Long Beach, Vince Staples’ breakout album Summertime ’06 made the upstart rapper seem like a way less intense and significantly funnier second in command to Kendrick Lamar in Cali’s battle to re-establish itself as a hip-hop capital. For its follow-up, Big Fish Theory, he broke from a successful formula that seemed to have plenty of juice left in it to mix his g-funk-indebted sound with the rhythms and textures of U.K. dance music. The end result sounds like what Jamie XX was trying to do on his solo record, but without all the suffocatingly awkward Britishness.

S U R V I V E is an instrumental synthwave band that is headlining Pitchfork’s Blue Stage on Friday. Band members Kyle Dixon and Michael Stein scored the soundtrack to Netflix’s Stranger Things sci-fi/horror series, and subsequently scored themselves a hit, earning S U R V I V E and the synthwave genre some mainstream attention that isn’t often granted to instrumental bands. I’m not sure how their creepy, foreboding synthesizer soundscapes are going to go over at an outdoor summer festival, but hopefully they conjure up a demogorgon or at least a telepathic kid.

Bonus Pick: Beer Tent 1 is a consistent draw at Pitchfork year after year, bringing huge crowds and long lines of thirsty festival attendees. This year’s lineup is another knockout, featuring appearances by Goose Island Beer, Virtue Cider, High Brew Coffee, Red Bull, and more*! I will be working all weekend in Beer Tent 1, so please stop by with your 21+ wristband, some drink tickets—three will get you a cold cup of suds—and a generous cash tip for the hard-working staff who will be keeping your alcohol flowing all weekend long!

“A queen is a queen of all things, respected by all means, uplifted by all kings. If he don’t show you love then he’s less than / Never stress it, tell that brother get to steppin'”
—Kamaiyah, from “Build You Up” on her debut album Don’t Ever Get It Twisted

The sounds and vibes of 90’s R&B and hip-hop like TLC, Tony! Toni! Toné!, and En Vogue definitely come through in Kamaiyah’s feel-good tunes and catchy hooks. However, make no mistake, Kamaiyah isn’t a retro act—she makes those sounds hers. On a warm summer night after a few beers outside at Pitchfork Music Fest, she provides the perfect soundtrack to you get you dancing and moving.

I’ve had multiple people suggest them to me. However, it was only recently, after reading Nandi Rose Plunkett’s view of sexism in the music industry, when I knew I needed to jump on this band. A band with a badass female can’t be bad, right?

I was hooked from the very first listen and found myself staying up late to watch every YouTube video on them. I’ve always been a sucker for music that has the potential to make me feel nostalgic, and Pinegrove does exactly that for me. There’s something very warm and insanely familiar about their sound. It’s the kind of familiarity you get when you’re walking around your hometown at sunset remembering all that dumb teenage emotional turmoil you were grappling with. Evan Hall’s voice and lyrics have a way of saying “What you’re feeling is real, and it’s okay.”

Unfortunately, Sunday night I’ll be thousands of miles up in the air traveling to my own childhood hometown overseas. But you can bet I’ll have Pinegrove playing in my headphones, thinking about all the places that feel familiar.

You might recognize Francis from his collaborations with stars such as Chance the Rapper, Bon Iver’s Justin Vernon, and Kanye. You may also be thinking, “Francis, who??” Although he’s been around, making synthy, dreamy, pop music for the last decade or so, he gained popularity after Chance featured him in the Coloring Book track “Summer Friends,” and also through his collab with Bon Iver on the song “Friends.”

His music videos are always simple, beautiful and artistic (and usually include some super cute, coordinated dance routines, which I love). I’m looking forward to seeing what his live show is all about. Who knows? Maybe we’ll get a surprise visit from one of his “friends.” *wink, wink*

Jeff Rosenstock has been called one of the most important figures in modern punk rock music by many (Including Pitchfork), and his most recent album, WORRY., was the #1 album released in 2016 according to USA Today. The latter stat would be significant on its own, but when you throw in that #2 was Beyonce and #3 was Frank Ocean, this looks more and more like an outright coup.

Why is the former frontman of such oddly-named influential bands as The Arrogant Sons of Bitches and Bomb the Music Industry! a big deal? For starters, his ethos is highly inspirational to many—from pioneering the pay-what-you-want system with his record label Quote Unquote Records (it was not Radiohead, people) to his years of DIY touring. He’s produced albums for some of our favorites, like Mikey Erg, Dan Andriano, and The Smith Street Band.

But most importantly, there are great songs about things that I can relate to. WORRY. touches on themes of anxiety in relation to the pressures of life, and that speaks to me. Plus, he and I will always have those times in 2013 and 2014 when we both joined MU330 for a couple of shows in NYC.

American Football’s self-titled 1999 debut is one of my favorite emo albums, and arguably one of the most influential albums of its genre. It helped me through my breakup during sophomore year of high school. Honestly, and not to be overly dramatic, I just think it’s [the] best and you should catch their set.