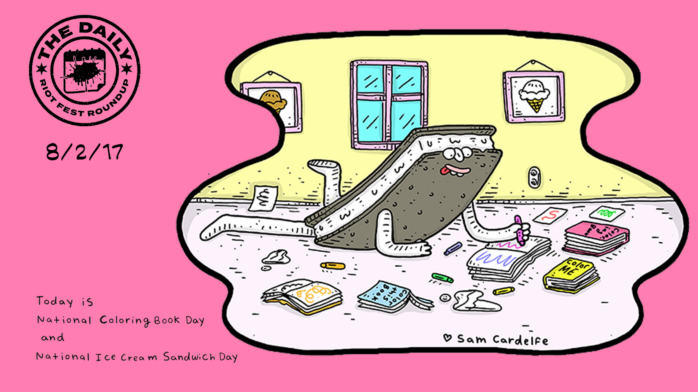 Fugazi has given the thumbs-up to an opera in NYC using sounds from the band’s live show archive. To explain it best, let’s just directly quote Pitchfork, shall we?

It’s All True is a new opera created by the New York-based ensemble Object Collection that is “based on the complete live archives of iconic underground band Fugazi.” The 100-minute performance, created with the band’s approval and endorsement, samples the sounds of “random feedback, aimless drum noodling, pre-show activist speeches, audience hecklers, and the police breaking up gigs” found in the countless hours of archival Fugazi live recordings in existence. “All of us were both blown away and disoriented by the work,” said Fugazi’s Guy Picciotto. “We feel moved by Object Collection’s engagement with our archive material and salute everyone involved for their hard work and patience and for wrestling with such integrity with our sounds and words.”

The Orwells have a new video for their song “Vacation,” and it makes us want mai tais!

Check out the new video for “Be Sweet” by The Bombpops. The lyrics for the song, written by late Teenage Bottlerocket drummer Brandon Carlisle for his wife, hadn’t yet fully been married to music when when he suggested to The Bombpops that they finish it in for him. The video has a super fun Ed Sullivan Show-type vibe, so get rad and enjoy!

The Wonder Years has a new EP coming out on September 22nd called Burst & Decay, and has released “There, There” for you to dig. It’s an acoustic version of the song, which originally appears on the band’s 2013 album The Greatest Generation.

Remember that series of 7″ singles that Twin Peaks is releasing all year? No? Liar.

Anyway, here are the latest tracks from that series, “Shake Your Lonely” b/w “Sun and the Trees.” We’d give you the link to buy the vinyl, but it appears to be all sold out, you sloth.

We feel you, Vic Mensa.

i’m sleeping off the dope but i’m woke

This sounds kind of miserable but could probably will end up being really fun, so don’t worry, WORRIERS.

Booking a future US tour while you’re on a US tour is something I never ever ever want to do ever ever again.

High there, Dirty Heads! We see you’re selling your own vape pens in San Diego. Right on, bro!

In case you missed it, our Dance All Night and Medusa #StickEVape pens are available NOW in San Diego dispensaries! Go pick them up! pic.twitter.com/8AFiycoyWX

The Regrettes are playing SWMRS‘ festival in October, along with Culture Abuse and others!

hey we have MORE news involving @swmrs ! we are playing their festival on october 28th yay yay yay 😊😃😍 pic.twitter.com/kbnIPnFMmf

Dont know how we missed this one, Laura Stevenson. But we’re…glad we did?

Reno! Guess what happened the last time I played here- it rhymes with pooped my pants at the sands casino. Show tonight @ holland project!