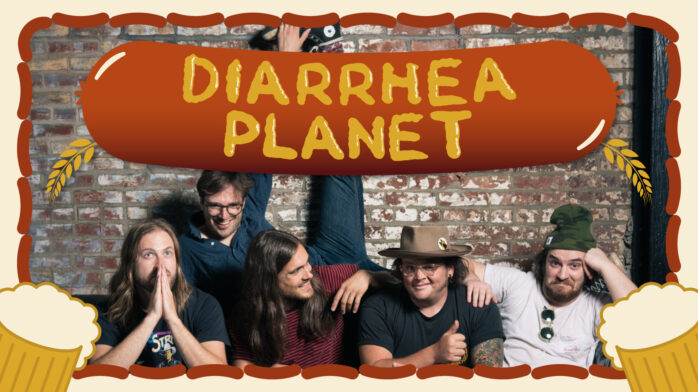 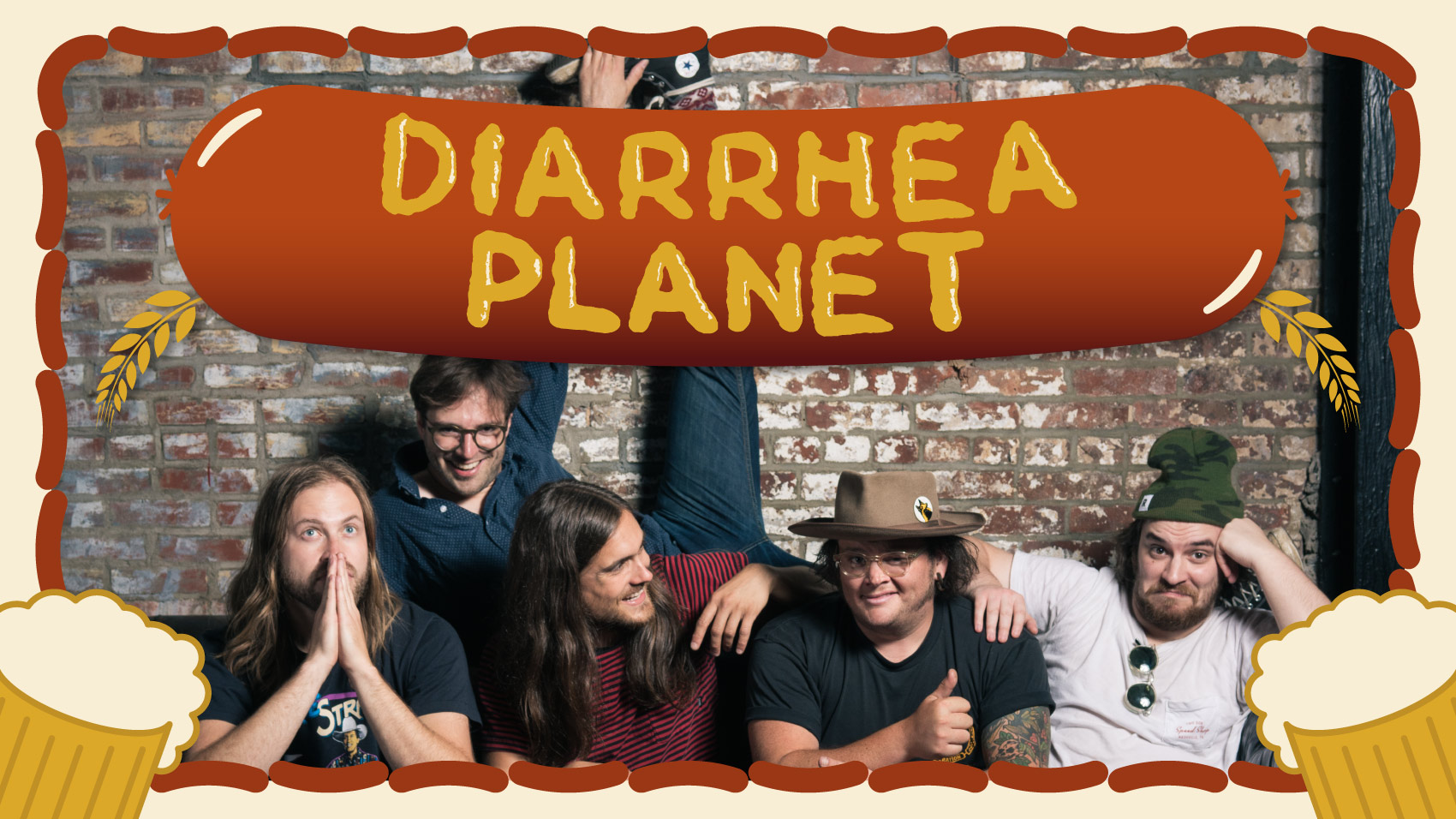 Würst Music & Beer Fest runs this Friday through Sunday on the corner of Randolph and Ogden in Chicago, featuring some great bands and even greater bratwurst. The gig takes place right outside the Plumbers Local 130 building, so naturally we’ve got Diarrhea Planet headlining the first night. Riot Fest spoke with guitarist/vocalist Jordan Smith about the Nashville scene from whence they came, the band’s future plans, what they love about Chicago and, of course, that amazing band name.

You guys are part of a bigger Nashville scene with bands like Daddy Issues, Music Band and JEFF the Brotherhood. What IS IT about all these groups THAT makes the Nashville punk scene so special?

It’s definitely felt like the quality of songwriting was better. I can’t say this across the board for every scene, but I just think in Nashville, there’s a very high percentage of good songwriting bands. I know after moving here, having being an outsider to that scene, I immediately picked up on that—“Man, all these bands wrote the catchiest music. Everything they do seems effortless and cool.” It kind of reminded me of the grunge scene in the ’90s, you know? I got really stoked on it. Nashville’s a very different city now, because back then everyone was living in close proximity to each other, it was affordable. There was a neighborhood where on the whole block, every house was a band in the scene.

Everyone was centrally located around Glenn Danzig’s House, the old DIY show house. It was rad, because if you threw a party, two or three houses would open up and all the bands would walk over and we’d all just hang out. I hadn’t been anywhere like that–I came from Indianapolis, where I felt like it was more of a “drive” city, where everyone was spread out. It was neat how tight-knit everyone was. The commitment to the DIY ethos and having the competition of Nashville, where everyone was in a band and you had to figure out what you do uniquely and to the best of your ability, as opposed to “be better than everyone else.” That’s what makes bands stand out here—the uniqueness of their songcraft. Everyone here can play. If you’re good at your instrument, that’s not enough.

Last year, after you released Turn to Gold, there was some talk about how you guys could have jumped to a BIGGER label. What made you stay on Infinity Cat?

When we were in negotiations, we were talking to some other labels and we got kind of far. What it came down to was a lot of labels expect artists to give up the rights to their masters in perpetuity, and the labels we were in talks with wanted us to give up the rights for amounts of money that was like “Dude, this isn’t going to get us anywhere in life. We’re literally just giving you our rights, for free.” We were just getting enough money to pay for the recording, essentially. There’s no money for the band. We went with Infinity Cat because they were fair about what we were getting out of the deal.

We’ve been a hard-nosed band about defending the rights of musicians and speaking out against how a lot of music companies take advantage and make it difficult to make a living. So, we didn’t want to play the game that time. Infinity Cat did a good job on the other records, so [we did] another one with them. We just felt like for the amount of money they were offering, that theirs was the fairest deal that we could get that infringed on our rights the least.

How did you even come up with the name?

The guy who started the band with me went to Belmont University, and basically back in Nashville in that era, if you went to Belmont and were in a band, you couldn’t get gigs, because Belmont is a dry campus. They used to be much more conservative, so Belmont bands wouldn’t bring enough people to bars to drink so they don’t make enough money [to get booked]. Belmont lures you in with this idea that they’re accepting of all styles of music and all forms of art, showcasing their student body talent, but in reality, they’re looking for the one percent of kids trying to do the John Mayer thing or the commercial thing.

We were in this weird area where no one at our school would give us a shot, because we wanted to play more extreme punk music. No one in the scene would give us a shot because we went to Belmont, so we kind of had to start booking ourselves, taking any show we could get. The name was a reaction to that. We said, “Well, if people aren’t going to give us a chance, let’s come up with a band name that could never be cool or used. Something esoteric, like an eleven-year-old made it. If we ever get good, we will force people to say “this is the band I like.” It was a reaction to all of that—“fuck this, we’re going to fuck with everybody.” It got farther than it was supposed to. It was supposed to be a joke. [laughs]

How do you get people to pay attention to the band when they can be vocal about being upset by the name?

You really can’t. [laughs] People are going to think what they want to think, and if someone wants to pre-judge a book by it’s cover, that’s fine, they’re going to be the ones that miss out. It’s one of those things that I know turns people off, but at the same time, I don’t really care. I’m of the mentality that I like all kinds of music, and I will check out anything even if it’s, like, super popular and I think their fanbase is annoying. I think good music is good, no matter what. Granted, some controversial artists, you shouldn’t support because they do bad things in their personal lives, but that’s another argument: separating the art from the artist.

What is the funniest reaction you’ve heard to the name?

There was a newspaper that had this column called Ticked Off where some grandpa wrote in saying that his grandson wanted to get a record, so he went down to Grimey’s here in Nashville and it turned out the record he wanted was one of ours—I’m Rich Beyond Your Wildest Dreams—and how he was so offended that a band could have a name like ours and an album cover with a shiv being pushed through a hand. He was livid about it and how it showed an act of violence. That was really funny. Most of the local publications wrote about it here, like “Oh my gosh, Diarrhea Planet made this grandpa really mad!”

You’re playing Chicago this weekend. What do you like about it here?

I’m sure this isn’t the most exciting thing to hear, but we are massive fans of Chicago Music Exchange. Every time we go to Chicago, we always visit CME because those dudes are awesome! That store’s staff are the coolest people, and we’re guitar nerds, so we always love seeing that stuff.

The restaurant we always like going to is called Tweet. They have the craziest brunch and we always really like doing that. That place’s menu is off the chain. That chef is a genius.

I have a ton of friends [in Chicago] from growing up in Indianapolis. Chicago is the biggest, coolest city you can move to from Indy. I like going there to catch up with some old friends from high school, we just have a good time there. I kind of dig the Midwest feel. It feels like home, you know?

Any ideas what the next record is going to sound like?

Diarrhea Planet. [laughs] We’re a true rock band. We’re not going to cave and be of those bands that makes a shitty-ass Americana pop album with electric guitars posing as a rock album so we can get money. We’re not going to do that shit. But hopefully, the stuff we’re working on now, I would argue, there’s more attention to songcraft than ever before. I know I’ve been trying to break out of my box. The things DP gets talked a lot about is that we write a lot of songs that don’t have a lot of structure. It’s kind of like David Lynch—everything that guy makes is meant to be encountered as an emotional response, it’s not necessarily supposed to make sense.

[That’s] kind of been DP’s thing—every song has been engineered to hit you to cause an emotional reaction. I would argue that this is the most songsmithing we’ve ever done. We’re paying attention to song structure, and it takes a little bit more time, and you have to think a little bit more. There’s more traditional songwriting on this album that I can follow instead of being like “Yeah, there’s a loud part! There’s a quiet part! There’s a fast part! Then there’s a weird keyboard part and then there’s this!” We kind of recognize that no one’s making rock, no one’s labels are putting out real rock anymore. There’s a huge gap and we need to help be one of those bands that stand in that gap and say, “Rock is not cool right now, but we don’t care. There’s still people that really like it and that want it.” We’re just going to keep doing it. We’re not going to country. [laughs] It’s the only genre that makes money that’s not rap.

We were just talking—you’re in a country band, you tour for two years and you’re in a bus. Rock bands, it’s like “You’re going to be in a shitty van for ten years!” Then you might get a bus. It’s kind of a rough genre. I gotta pick up a side gig or something in a country band. [laughs]

Have you ever seen Diarrhea Planet’s video for “Babyhead?” It’s fucking awesome. Watch it now, please.