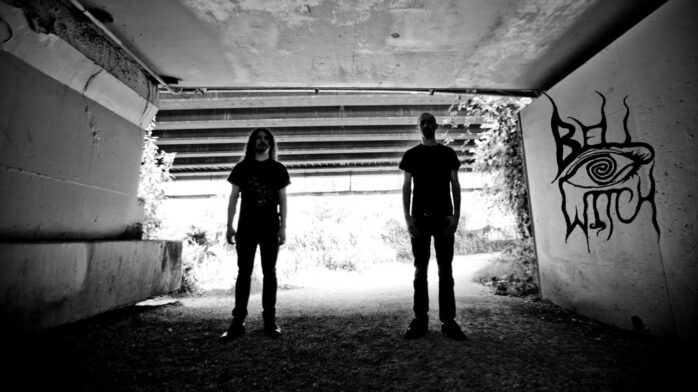 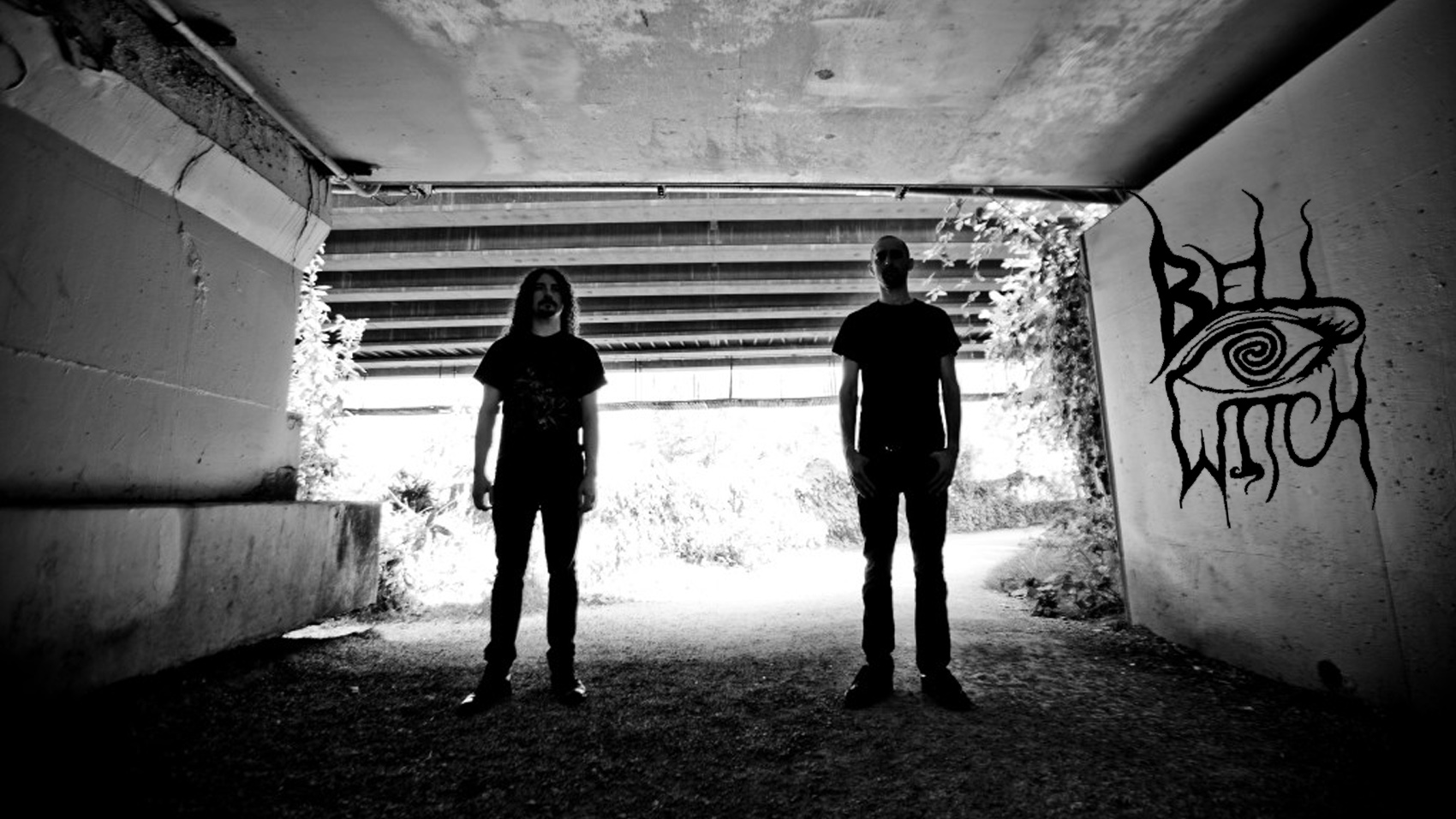 During the writing of Seattle doom metal band Bell Witch’s fourth album, founding vocalist/drummer Adrian Guerra died unexpectedly. Bassist/vocalist Dylan Desmond and new drummer Jesse Shreibman took time away from the recording process to mourn Guerra’s death. When they returned to the music, they realized the material worked best as one uniform track. At 83 minutes, Mirror Reaper — out October 20th on Profound Lore Records — feels like an unending loop of dark, tangled noise interspersed with wrenching grief. Moments of icy distortion give way to silence, and deep growls of pain mingle with melodic, calming guitar passages. Its iron weight only gains intensity until its final, fading notes offer relief.

While on tour, Bell Witch plans to perform about 45-50 minutes of the track continuously, and will tear through the entire song without breaks at next year’s Roadburn Festival in The Netherlands.

Desmond and Shreibman talked with Riot Fest about how the loss of Guerra increased the intensity of Mirror Reaper while changing the album’s trajectory, and how they wanted to make the album their own while keeping true to Bell Witch’s sound.

RIOT FEST: When Adrian died, how did you cope?

DYLAN DESMOND: Adrian wasn’t part of the writing process on this song. We hadn’t really spoken with him a whole lot. But when he passed, we both slowed down and… it was kind of tough. We were both really close with him. It became emotionally awkward to be working on a song in a band that he had been in. I think we both needed a little bit of space to wrap our heads around what was going on. When we started coming back to the song, we started toying around with the idea of using some of his vocal tracks, because the song that we pulled them from was definitely his favorite track on Four Phantoms.

RF: Was his death unexpected or had he been sick?

JESSE SHREIBMAN: I think that we’ve both had way too many friends of ours pass away too young, and I think that anytime that happens, no matter why or how or when, it’s always the same gutted feeling of “That was too soon, that shouldn’t have happened.” I think that the “why” is something that people tend to focus on a little too much when it comes to death in general. Those questions are best left in reserve to the people who are in direct grief — namely the family — to deal with on their own terms.

RF: When you put this album together, did you already have the idea to make it one track, or did it evolve into that?

DD: The original idea was to make two movements that have several tracks throughout. The first movement was gonna be “As Above” and the second movement was gonna be “So Below.” As we were piecing the songs together and mapping it out, it became apparent to us that it would be better portrayed as one track as opposed to two. So we stuck with that idea instead.

JS: It was also the first time that Dylan and I had ever really written anything together. And the song kept getting longer and longer, and we kept adding more and more parts that all seemed to fit really well. After months of doing that, it became pretty clear to both of us that it was not gonna be single tracks. It wasn’t gonna be two, it wasn’t gonna be seven, it was gonna be one. And I think it came out for the better in that regard.

DD: There’s a point in the middle of the song when it goes from a heavy distortion part to a more clean riff. We were like “Well, this is kind of like a reflection of a mirror.” Some of the lyrics are referring to mirrors. That’s how it turned into Mirror Reaper.

RF: What were the challenges to creating such a lengthy track?

DD: It’s all based off of one riff, which is what the intro is, and that repeats at a section where there’s no percussion for a moment, when it’s just the bass. It’s all based around that riff. We just kept taking variations of it and letting those go and develop into their own riff, their own sections. It fits together really well because everything’s in a reference to itself.

JS: We had it written out in 20-minute increments that we were working on and revitalizing. When we recorded the actual album, we did it in basically four parts that were then put together, because playing for an hour and a half, live, and not messing up would be really, really hard.

RF: How did you incorporate Bell Witch’s earlier sound into Mirror Reaper?

DD: [Guerra] was such a big part of the band in years past, [and we wanted] some sort of tribute to him. When we finally decided on the spot, it was because it was right in the middle and it was because of a turnaround in the song. The riff that it’s in sounded a lot more similar to a different riff on the Four Phantoms album. We had to work out some of that, make it sound less like that riff and give it its own personality. So that was the perfect match.

RF: Did you also feel pressure to have the music sound differently from Four Phantoms?

DD: We were trying to just expand on the sound in the way that Four Phantoms was expanding on what the album before, Longing, was doing. Jesse added organ, and that [provided] a whole new layer, which is a really cool addition.

JS: We talked long and hard about all of that. There’s no doubt that Adrian and I have different drumming and vocal styles, and we were trying to make sure that this new album didn’t sound like a completely different band. And I think that’s where the organ came in — when I realized that I could be doing something else while I was also playing drums and doing vocals.

RF: Do you feel Adrian would be proud of your new music?

DD: Jesse and I had been playing a section of it on an East Coast tour. We had played maybe a 15-minute version of “Mirror Reaper” every night live. He saw a video of that, and he and I were talking in a text. He was saying, ‘This new song sounds great. That’s cool. Good job.” I know he was into the song already, but I think that just by knowing him so well… if he could come back to life for a day and listen to the song, I think it would be a really big deal to him. And I think he would be very honored. We spoke with his family about it and they were very honored. They thought that he would be really into the idea.

RF: Did you feel like some of your grief was released into the music?

DD: For myself, I think that it definitely 100 percent did. I was listening to it and made little mental notes where I think that it could be seen as the five stages of grief. There was a section for each of them. It was a tough writing process because of that.

JS: We’d already been writing the song for pushing a year almost, when he passed away. It added a different feeling or amount of pressure to perform that wasn’t there before. Because before, we were like “Alright, new album, let’s see where this goes.” And then all of a sudden that happened, and we had to reassess what we were doing, why we were doing it, and if it was worth doing.

DD: We both felt like there was something of his legacy in this. If the album hadn’t been that good, if we had kind of just written a dud of an album, that wouldn’t have really done justice to him. There’s more to the song than that, of course, but that was definitely an emotion that was pressing.

RF: Are you planning new music after this tour?

JS: Absolutely. I don’t think it’s gonna be another hour-and-a-half-long song. I think we might take a break from that [laughs].