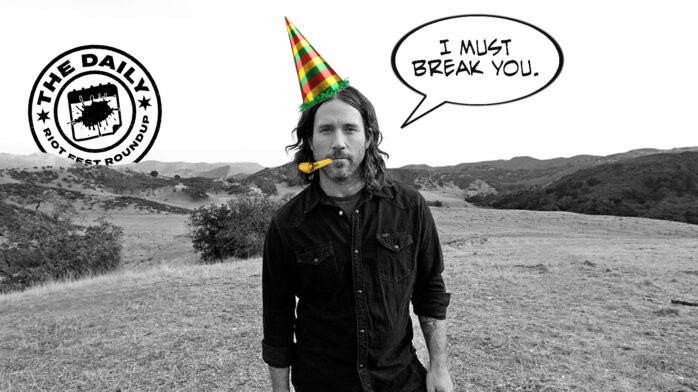 Happy Halloween Eve! Here’s some hard-hitting and spooky topical content that we’ve published in honor of the scariest of days…

Someone In Wisconsin Is Passing Out Free Meth For Halloween

Hey Slackers, You’re Going As A Vampire This Year

Gundella’s Collection of Witch Spells is Reissued on Vinyl, Goth As Fuck

Keep an eye out for John Carpenter: The Riot Fest Interview tomorrow morning… in the meantime, we’ve been keeping up on current events…

What We Know About George Papadopoulos

Aand from the grab bag…

Has Using Children’s Toys in Rock Songs Ever Not Sucked?

Jim James from My Morning Jacket has a new covers EP coming out that he’s calling Tribute To 2. We haven’t looked too far into the Consequence of Sound premiere, but what we do know is that he covered this rad Beach Boys song. Have a listen.

The Gaslight Anthem’s Brian Fallon has a new solo album coming out on February 9th. It’s called Sleepwalker, and here’s a new song from it called “Forget Me Not.”

Chris Cresswell from the Flatliners getting his Black Coffee Sessions on…

So, this is a spooky thing that exists.

In SIlver Lake in my new apartment, scared as shit, what did I do? Did I do the right thing? I’m having second thoughts

Thanks for taking over our Twitter last week, Toby and Ray and Brendan.

Here’s a pic of us heading to @TheFestFL. We’ll have a @RedScare table with flasks, records, shirts, hats… Say hi! pic.twitter.com/kmuRzmsuDm

Southwest, we fly places to get away from concerts. FAIL.

Southwest adds live concerts to some flights and there’s nothing passengers can do about it https://t.co/LLDighY2g9 pic.twitter.com/VGxPU4w6Uo

What a dumb name for such a rad thing.

Our condolences go out to Joan Jett.

I love you honeytoes. You will always be my little girl. See you on the other side, Stephanie Jett*. Mommy* pic.twitter.com/omAGwHBIpu