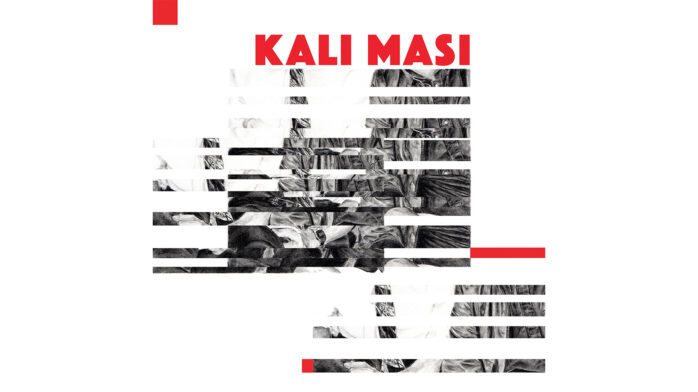 Listen to Kali Masi’s New Album While Reading This Interview 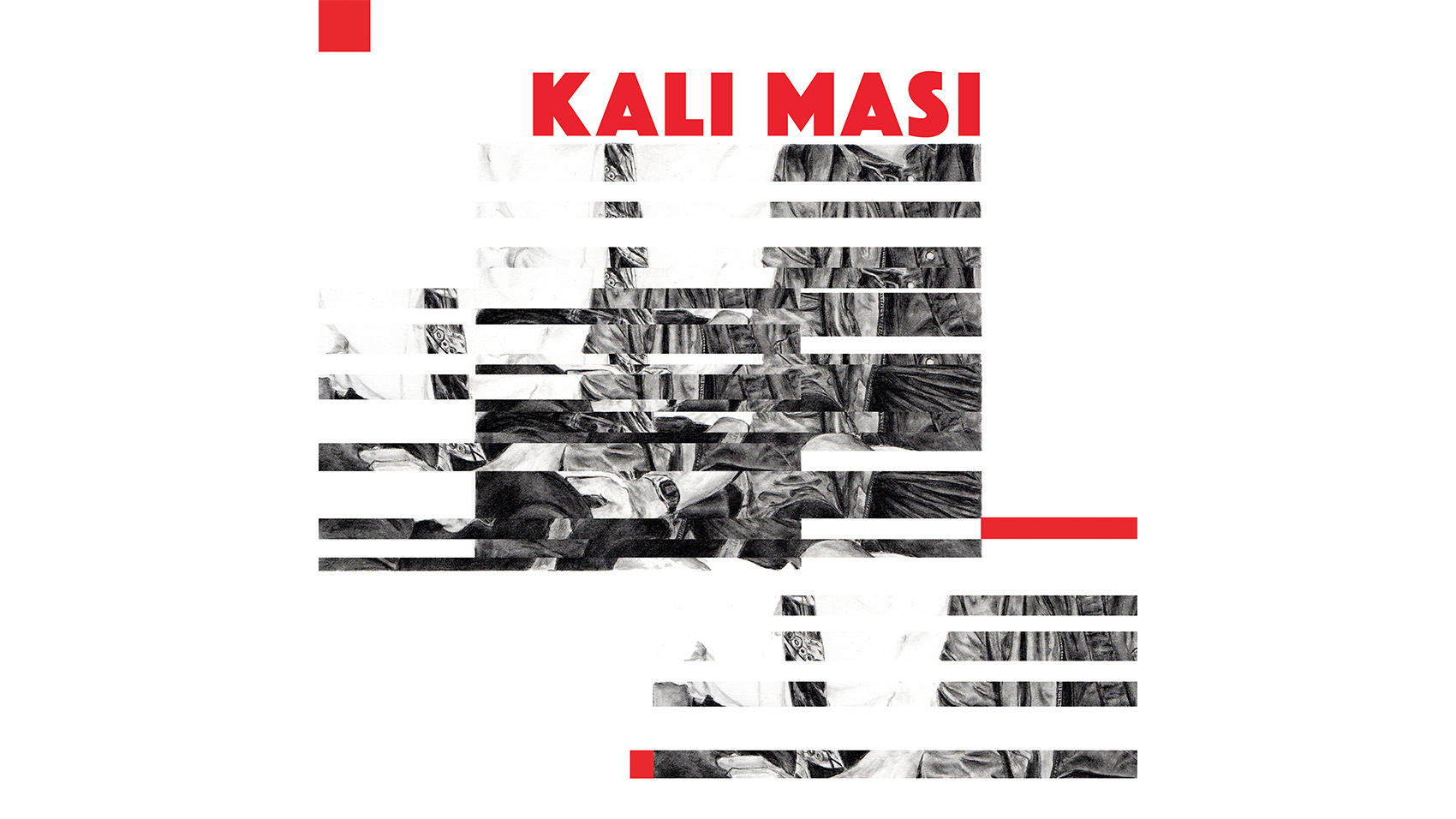 Sam Porter and John Garrison’s first collaboration was an Against Me! cover band that found the two-piece tearing through cuts from the Florida punk outfit’s early catalogue. That project was short-lived, but Laura Jane Grace’s mastery of mingling infectious melodies with a punk snarl certainly made an impression on the young musicians. As members of Kali Masi, the Chicago punk outfit they formed alongside bassist Ryan Grillaert and multi-instrumentalist Wes Moore, the band is making heavy music chock-full of shout-along hooks and complex themes.

This Friday, the band drops the cathartic Wind Instrument, a debut album that occupies a space between anthemic pop-punk, Midwestern emo, and ‘90s alt-rock. And while songs like “Her Palms Are Read” and “Sputter” are catchy enough to have audiences spitting their lyrics back at the stage, others like “Recurring (II)” and “Powerline Days” tell stories filled with striking, intimate details and questions that cut to the bone.

Porter and Garrison were also kind enough to chat with us about the album, their influences, and the gnarly black chicken that inspired their band name.

RF: Wind Instrument is your debut LP, so about how long have you been working on it? What does it represent for you guys as a band?

SAM PORTER: It’s been taking a while to write this record. We knew we wanted to put out a full-length, but we were writing slowly and a lot of stuff was happening internally with the band that slowed things down. The last thing we put out was in 2014, and that was a single that’s on this record.

JOHN GARRISON: We put out a couple EPs and started working on this one about three years ago.

SP: It’s a special record to us. It’s kind of like this artifact that represents a period of intense change and growth for us as a band. It wasn’t a highly conceptual record, but I think a lot of the stuff that was going on for me in my life were there—identity issues, self-awareness issues. The record deals with taking a hard look at yourself and being like, “Maybe this isn’t who I wanna be and where I wanna be.” But being lost is a part of it, I think. It’s part of growing up. I don’t think growing up ever really ends. And even after finishing the record there was no, like, conclusion. Or maybe the conclusion is that it’s okay because everybody’s lost. We’re all lost together.

JG: I love Sam’s lyrics. As a drummer, it’s sometimes difficult to find someone that you wanna make music with that’s on the same page as you and is writing songs that you would absolutely listen to.

SP: I don’t think it really would’ve been possible if not for all the people we meet on tour, the people who always believed in the band and supported us when we were young and it was all super cheap. People would give us a place to sleep and did photography and video work for us for free. It’s a different ballgame now, but none of it would’ve ever happened if it wasn’t for our friends. I hope people can get a lot of positive stuff out of the record even though there’s a lot of pain in it.

RF: You guys used to go by The Howl. What led you to change your name? Would you say there was a shift in the direction of the band?

JG: There wasn’t really a shift in the direction we were taking the band. Honestly, one of the reasons we changed it is just that there are a lot of Howls out there already. We were planning on putting out this record and it would be our debut so, you know, if we were gonna change our name, that was the time to do it.

RF: What significance does the name Kali Masi have for you guys?

SP: It took us such a long time to come up with a name. The most important not-important thing you can do in a band is name it. But there’s this artist I really, really like that put up a photo of this crazy black chicken. I did some research and found out they’re called kali masi chickens and they’re just really gnarly-looking chickens with black eyes, a black beak, and black feathers; and their bones are dark and their blood is darker than others. I just thought they were a really fucking sweet animal that seems kind of resonant with a lot of the themes we were writing about at the time.

JG: Also, it was definitely not already another band. It’s a disease-resistant chicken. In my opinion, it’s just a really good name for a punk band.

RF: Who were you guys inspired by when it came to making this album? What were you listening to during the recording process?

SP: For me, I can never decide if i want to be in a Strike Anywhere/La Dispute kind of band or if I wanna be a Phoenix/the Wombats kind of band. I listen to everything, from a lot of punk and hardcore music to a lot of really poppy stuff, and I think that that influenced a lot of the record. It goes from songs like “Your Other Left” that are faster than a lot of punk songs to songs like “Ghost (The Pottery Scene)” or “Her Palms Are Read,” which are a lot poppier than the rest of the record. I was listening to a lot of La Dispute over the last couple years, a lot of Strike Anywhere, but also a lot of A.A. Bondy. I was all over the map.

JG: I grew up listening to classic rock, and that turned into Death Cab for Cutie and The Shins and stuff, and then I found this mixtape in my brother’s room and it had all these old Against Me! Songs, everything in their discography at the time. That got me into punk.

SP: When I was a teenager I listened to a lot of punk bands, but also a lot of glam rock, actually. My first guitar hero was Olga Algar from the Toy Dolls, just this weird shredder guitarist. I also loved the Nerves and the Exploding Hearts. That was the stuff that I was like, “Oh, I wanna be in a band like this.”

RF: Your lyrics are very personal and specific—lots of locations, striking images (“sharpied onto scotch tape on a coffee can”), questions (“Am I the reason you stopped eating again?”). They sound like the kind of sentiments you’d hear in an intimate acoustic ballad, yet here you translate them into these anthemic punk songs. What comes first, the words or the melodies? Have you faced any challenges in this regard?

SP: Yeah, total challenges. I think that writing lyrics comes easy for me, and writing music also comes easy to me, but I’m really bad at putting them both together. Like, when I try and write lyrics for a song, it usually comes out really contrived and really, to me, very A-B-A-B. What I feel like I end up doing is writing what I want to write and then kind of mashing it over a song. Then it just fits the way that it fits and we kind of round the edges of the song and make it work. I think that is definitely why so many of the songs are super wordy. I have a lot of things I wanna say and topics that aren’t so simple for me because I’m in my head a lot, I think.

JG: It depends on the song. A lot of times Sam will just bring in this amazing finished song and then I’ll try to write drum parts. Sometimes we’ll just start out with a guitar riff and then we’ll all work together on building around it.

RF: “Powerline Days” feels like an especially resonant combination of your ability to fuse dense lyricism with strong hooks and a depth of emotion. How did that song come about?

SP: The first two songs we did were “Jejune” and “Sputter.” And then we had “Your Other Left” and “Powerline Days,” which I think we just called “New Happy” and “New Angry” back then. For “Powerline Days,” we had that main rhythm forever and we would just jam on it for so long, not really sure how the changes would break out of it. It’s kind of a weird rhythm, the way that the drums and the guitar sit over each other, so it took a while for me to figure out what kind of melody to sing over it. Then, one day I just came into the practice space and wrote it all at once and it was again one of those processes where you wrote a bunch and just tried to smash the lyrics all over the song and it all happened really organically. It ended up being one of my favorite songs on the record, for sure. I think it’s got the perfect mix of having a good rhythm, good vocal and guitar melody, and a really powerful chorus. And a dad rock bridge, which is awesome.

JG: It’s one of my favorite ones to play, definitely.

RF: Your tour kicks off later this month with a record release show at Cobra Lounge. What’s the band’s personal approach to touring? How would you characterize your live show?

SP: Our approach to touring is that when everybody’s free, we’re like “Okay, let’s tour again.” In the past, we were pretty cutthroat about going out for three weeks and doing a huge section of the country, but this past year has been more like 10-day or two-week tours that are really comfortable because we’ve been in between albums. I feel like things are about to get exciting, though.

JG: It’s a love-hate relationship, touring. But every time we go out we meet people that we end up being friends with for years. We’ve played shows in the middle of Nebraska to nobody and then we’ve played awesome shows to a bunch of people in Nashville or Oregon.

SP: Our live show, we’ve always just bumped knucks and, you know, [agreed to] leave it all on the stage. We try to bring it because we’ve all seen bands where you love their record but they don’t bring it live, and it’s just a totally different animal. We try to play as well as we can and as hard as we can and make it fun no matter who’s there.

Wind Instrument comes out this Friday, October 6th, and Kali Masi is hosting the release party for it on Thursday, October 19th at Chicago’s Cobra Lounge. Support will be provided by Post Child, Kodakrome, and Pylons. Tickets and more information are available here. 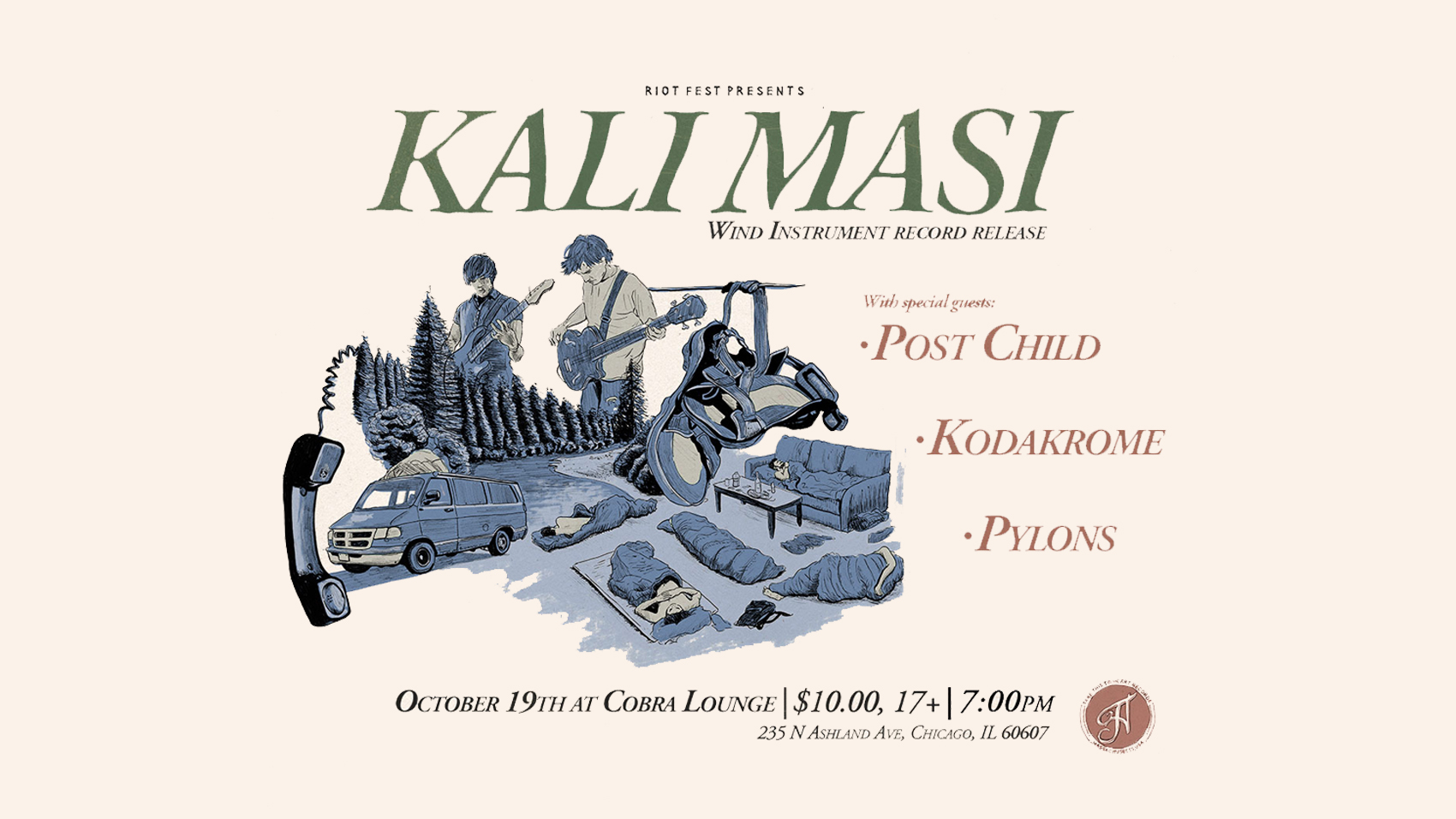