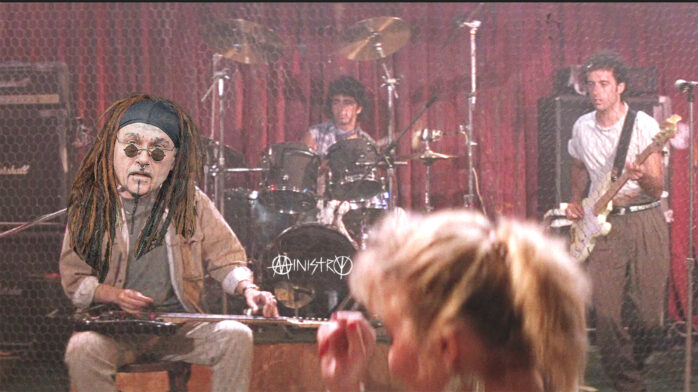 Who Wore Their Protective Fence Best: Ministry or the ‘Road House’ Band? 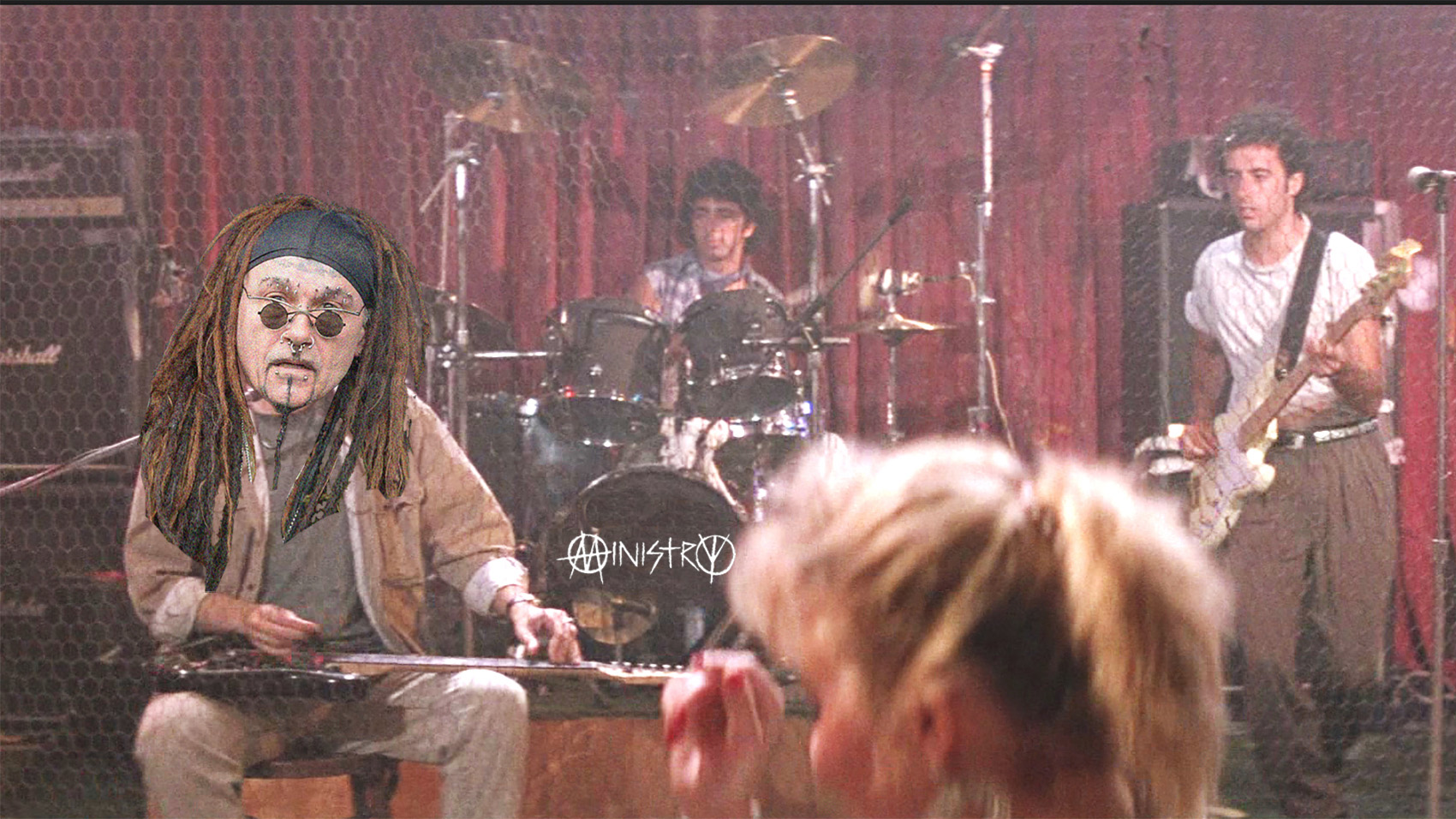 Last month marked the 27th anniversary of Ministry’s live album/VHS In Case You Didn’t Feel Like Showing Up, which the internet failed to appropriately commemorate because Ed Sheeran was getting his bangs trimmed or something, so we’re doing it now. In the concert, Al Jourgensen and company not only rip through six (seven if you have the VHS) unimpeachable industrial skull-rippers from The Land of Rape and Honey and The Mind Is a Terrible Thing to Taste, but do so in front of massive chain-link fences. If you saw the tape at a formative age (you know, before you learned that fences existed in church), you probably flipped the fuck out. It’s like a feature-length version of Nine Inch Nails’ “Wish” video, in which fans scale a barred enclosure to overwhelm the band and presumably dismember/cannibalize them just before it cuts to black. (Spoiler: In Case You Didn’t Feel Like Showing Up does not conclude with Ministry being dismembered and/or cannibalized.)

Mind you, just a year earlier, in 1989, another band transfixed the masses by bravely performing to an unhinged, dangerous audience behind a fence: the Jeff Healey Band, house band of Jasper, Wyoming’s preeminent watering hole “toilet,” the Double Deuce, aka the principal setting of the classic Patrick Swayze film, Road House. Granted, the Double Deuce lacked the security presence (not for lack of trying) that showed up to become Ministry’s In Case You Didn’t Feel Like Showing Up tour de force — spliced together from gigs in Merriville, Indiana and Chicago, which explains the fire-breather and Burning Man Dinobot once “Burning Inside” starts — but we still thought it prudent to analyze which band really went through the most shit. The answer might (not) surprise you (at all).

IS THE BAND HECKLED?

MINISTRY: No, although there is a prime opportunity when Jello Biafra shows up before the encore to recite an entertaining, albeit juvenile satire of the Pledge of Allegiance. But there is not a single fuck-you or middle finger hurled at Ministry throughout. What’s with these early ’90s crowds and their “respect” and “encouragement?”

JEFF HEALEY BAND: Memorably. During an opening-credits rendition of “On the Road Again,” somebody yells, “Bring on the real band!” (Mike and the Mechanics were headlining that night.) Immediately after, Healey announces, “We’ll be back in 10, gotta drain the main vein.” A patron of the arts with zero sympathy for main vein drainage retorts, “You’re paid to play, play!” Which leads to…

ARE THINGS THROWN AT THE BAND?

JEFF HEALEY BAND: The aforementioned patron of the arts (who minutes later observes with great interest as a hillbilly auctions off his female companion’s breasts for $20) guns a bottle of beer into the chicken wire, which explodes onto Healey’s face and throat (Healey, it should be noted for the unfamiliar, was blind both in the film and in real life.) The musician recoils in… well, I can’t say pain, because it’s unclear if he got cut up or simply doused. But he does capital-R Recoil. Anyway, uh, that’s why the Double Deuce has a fence.

MINISTRY: Not at Jello, not at Al, not even when Chris Connelly (also of Ministry side hustle Revolting Cocks) climbs up onto one of the fences near the end of “So What.” Some shirtless kid does fly out of the audience and scale the fence like Spider-Goth (Connelly doesn’t flinch, which is badass), but is dragged down by a bouncer within seconds.

DO PEOPLE AT LEAST DANCE?

MINISTRY: The set construction graciously allows a couple feet at the lip of the stage for the audience to flail around and eventually stage-dive. Probably 80 percent of the audience takes advantage. Only a few kids overstay their welcome (just to fist-pump in front of the band) and have to be shooed away.

JEFF HEALEY BAND: Fuck yeah they do, as demonstrated in this [NSFW] video.

DOES SOMETHING UNFORGIVABLE HAPPEN?

MINISTRY: Twenty-seven minutes in (between “So What” and “Burning Inside”), an unconscious man lying face-first in his own puke is filmed outside of the venue. The cameraman tactfully inquires, “Wanna be in a Ministry video?” (This would qualify as like the 1,238th most unforgivable thing that happens in Jourgensen’s autobiography.

JEFF HEALEY BAND: A bouncer who is later shitcanned by Swayze for porking in the stockroom engages a young lady with, “You know, I get off at two, and I’d just looooove to get you off a half hour after that.” Mystery, eat your heart out.

DOES A MEMBER OF THE AUDIENCE POLE VAULT ONSTAGE WITH A POOL CUE?

JEFF HEALEY BAND: Yes. But he gets throat-ripped and left to die in a creek a half-hour later, so, all good.

By that tale of the tape, no fucking duh, the Jeff Healey Band had a rougher go than Ministry. Which doesn’t mean that In Case You Didn’t Feel Like Showing Up isn’t still a visceral, cathartic, crushing must-watch that still isn’t on DVD because… OH SHIT, BONUS ROUND!

Damn right! The Doors’ (wait for it…) “Roadhouse Blues!”