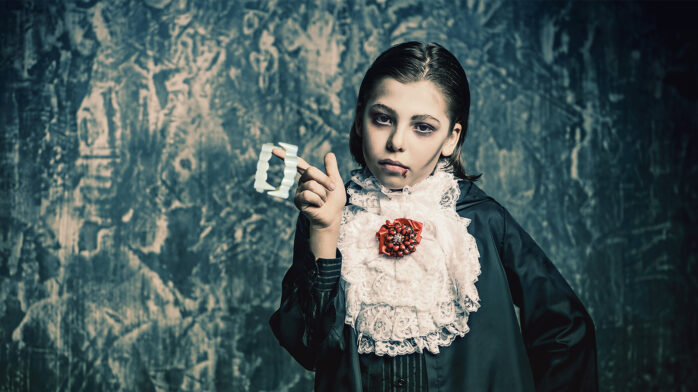 Hey Slackers, You’re Going As A Vampire This Year

When it comes to dressing up for Halloween, there are two types of people in this world: those who decided on a costume months ago and already have it all put together, and those who haven’t thought about it for a single second until just now. To the first type, congratulations. I’m sure your elaborate pun/cultural reference/political commentary is quite hilarious/timely/scathing and you’ll be the talk of the party. Everyone else: you’re going as a vampire.

“Vampire” is the best Halloween costume, hands down, full stop. This is not a subjective opinion, but a basic fact of existence. Possibly even a scientific law.

The obvious advantage that vampires have is that they’re cool, sexy, immortal creatures who, according to Filipino tradition, can turn themselves into crows. And according to the Blade movies, they throw crazy-ass raves in the sewer. Vampires are goth as fuck. Who doesn’t want to be a vampire?

But more importantly, it’s super easy to dress up like a vampire.

Because really, you’re not going to pull together an incredible Halloween costume at this point. If you were serious about having some kind of original costume that shows off how clever and crafty you are, you would have had it together before the Thursday before Halloween weekend. And if you’re not that committed to the costume game, then you’re probably not going to want to deal with the rest of the procrastinators crowding the costume stores, which, honestly, have already been picked over by people who are more dedicated to this Halloween thing than you are.

Which is fine. People who are extremely into Halloween tend to raise the costume bar so high that the rest of us can feel like losers if our own outfits don’t involve flashing lights and/or servomotors and/or some kind of obscure and complicated reference to a Reddit meme. It can be easy to forget that we don’t all have to play that game.

And if you’re not going to go all in on an insane project, vampire is the number one classic Halloween costume to half-ass. Frankensteins are more work than they seem. Green-faced witch costumes disrespect the important work that actual witches do every day. Sheet ghosts and toilet paper mummy costumes are a pain in the ass to wear around for more than 20 minutes or so. Plus, it could rain, and then you’re truly fucked.

The far better option is just grabbing a set of fangs and concentrating your energy on simply having a good time. These days you can even get realistic-looking chompers that won’t get in the way of your drinking.

And if you want to add a dash of individuality to your outfit, vampirism is an extremely malleable theme. There’s no reason you have to stick to the tried and true Bela Lugosi-inspired “generic vampire” costume from Walgreen’s (although that is an extremely strong look). Slap on a pair of fangs and any outfit you put together suddenly becomes a Halloween costume. Pull out your biker jacket and Docs and your trusty fangs, and you’re a vampire punk. Snag a navy blue power suit from the thrift store, add fangs, and voila! You’re a vampire banker (or as they’re also known, a “banker.”) If your Give-A-Fuck-O-Meter is so far into the red that you’re pulling out the same Margot Tenenbaum costume you’ve been wearing to Halloween parties for the past half decade once again, then chop off your finger, spice it all up with some fangs, and suddenly you’re Undead Margot Tenenbaum, which makes it at least one hundred times cooler.

In closing, don’t let the pressure to be inventive and original and clever ruin what is essentially a holiday that, for adults, is all about dressing up in a silly outfit and trying to make out with someone else who’s also wearing a silly outfit. Vampires are a Halloween classic for a reason: because they fucking rule. You’re going as a vampire this Halloween. Congratulations.