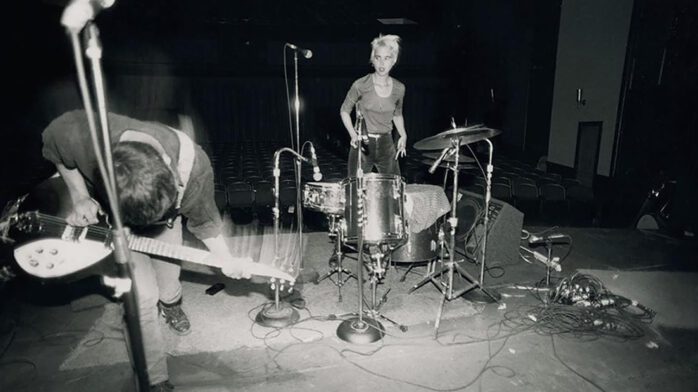 The Return of Kicking Giant, the Ultimate 90s Mixtape Band

People of a certain age like to talk about how much mixtapes meant to them as teenagers, and surely not without cause. Still, let’s face facts: most mixtapes weren’t worth the rubber cement used to make their cover collages. Not everyone is a tastemaker, nor even a person of particularly discriminating tastes; for every aural document that was the shoddily-assembled 90s equivalent of seeing the Velvet Underground in the 60s—inspiring countless young dreamers to start bands, or at least buy a cheap four-track recorder — there were ten tapes that were basically the second Sunny Day Real Estate album with the order scrambled, filled out by clips of dialogue from Taxi Driver.

However, there was a way to recognize a person of taste, basically depending on whether or not they put Kicking Giant on their mixtapes. The Olympia (by way of New York City) duo of singer/guitarist Tae Won Yu and drummer/singer Rachel Carns were perhaps the apotheosis of a mixtape band: intimate, funny, noisy, and raw as fuck. Their earworm melodies were delivered in off-key bedroom voices, never destined to get within a mile of commercial radio. This writer, for one, gave out countless mixes containing the band’s bonafide classic “She’s Real” (single version, not album—an important distinction). The song is such an essential guiding light in my musical universe, in fact, that when I happened to see the original master tapes of the song sitting out in the open on a visit to Olympia’s Dub Narcotic studio a couple years back, it took all my resolve to not run out the door with them, or perhaps physically embrace them and claim them as my child.

Kicking Giant is still a band adored by 90s indie trainspotters, seeming to warrant a far greater depth of affection than that afforded any of their more popular peers like Pavement, Sebadoh, or Built To Spill. (Incidentally, Doug Martsch and company are among Kicking Giant’s devotees, covering “She’s Real” on a collaborative EP with Caustic Resin, and even taping Tae Won Yu–who also spent the ’90s as in-house designer at K Records—to design the cover of their benchmark album Keep it Like a Secret). I’m sure that those longtime fans are buzzing with excitement, then, over the long-overdue vinyl release of This Being the Ballad of Kicking Giant, Halo: NYC/Olympia 1989-1993, out now on Drawing Room Records. Halo, as it was originally known, is a compilation of tracks from the duo’s early cassettes, only available prior as another hard-to-find cassette or a limited CD with packaging designed to resemble a cootie catcher.

While the band’s sole studio LP, 1994’s Alien i.D., was largely given over to the band’s most straightforward punk/noise-rock leanings (think Sonic Youth but more fun, or Unwound without all the math), the recordings that make up Halo are their most wide-ranging, intimate, experimental, and ultimately inspiring. The unseemly guitar squall of “Stereo Hi-Fi”, the love-punk anthem “Fuck the Rules”, a completely abstract cover of Love’s “Comes in Colors”—it’s all here, and it’s the kind of stuff that makes you want to start making mixtapes again.

Kicking Giant formed in 1989, shortly after Tae Won Yu spotted Rachel Carns wearing an Einstürzende Neubauten t-shirt while both were attending classes at Cooper Union in New York City. Deciding they were kindred spirits, the two had started talking about being in a band together before they’d really quite figured out how one might go about it. Luckily, this plan went beyond party jokes, and the two learned their craft together, carefully combining their disparate influences into a unique, heady blend.

There were a lot of bands in the early 1990s panning the various rivers from whence Kicking Giant mined their sound, but what made them unique is the unusual combination of those inputs: many may have been keyed into the dreamy racket of the Jesus and Mary Chain, the downer neo-psychedelia of Spacemen 3, 60s girl groups, ragged twee-pop like the Pastels and the Vaselines, the dissonant sleaze of Royal Trux, the post-punk austerity of classic Factory Records, or K Records and Kill Rock Stars’ International Pop Underground in the Pacific Northwest. But no other bands had the ingenuity or inclination to combine all those influences into one hyper-minimalist band. As a result, Kicking Giant were a bit of an anomaly: they were too openly sexy and weird for twee, too melodic and giving for pigfuck/noise, too minimalist and cute for hardcore, too sloppy and late for post-punk. Truly, they were riding a wave of their own conjuring.

Of course, by doing their own thing well, they eventually drew others in. Having made their mark in Olympia after relocating there in the early ’90s, the latter half of that decade found a litany of bands in the Pacific Northwest taking Kicking Giant’s lessons and running with them, from Sleater-Kinney on down. Any group since who’s been made up of sweater-wearing sweethearts playing with punk propulsion and/or with a drummer that plays standing up–Tyvek, Twin Peaks, Vivian Girls–has owed a debt to the iconoclastic duo that made the unusual (but, let’s face it, quintessentially 90s) choice to move from the cultural center of the world to a weird, provincial college town in order to allow their music to reach its ideal audience without compromise.

Now that the material on This Being the Ballad of Kicking Giant, Halo: NYC/Olympia 1989 – 1993 is finally available again, can we expect the Kicking Giant mania that so many mixtape-makers have been awaiting for 25 years? There’s at least as much reason for doubt as there is for hope. Still, it’s out there again, and maybe that’s enough.