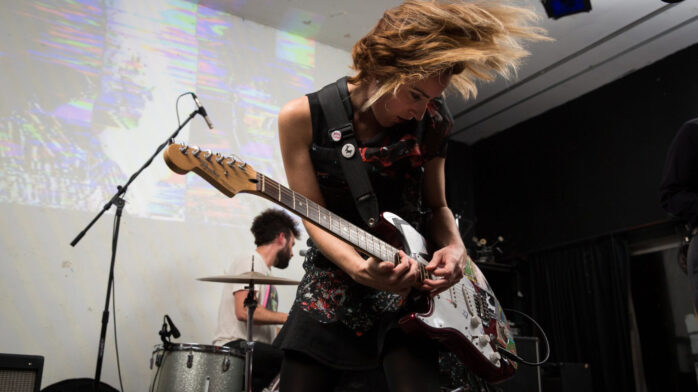 Parlor Walls are a unique band, even by the standards of the experimental edge of the Brooklyn punk scene where they’ve kicking up noise for the past few years. It’s not just because they’re one of the few groups around with a member who alternates between clarinet and the oddball breath-controlled MIDI interface known as an Electronic Woodwind Instrument.

Singer/songwriter/guitarist Alyse Lamb, drummer Chris Mulligan, and clarinetist/EWI player Jason Shelton create music that relies on a sense of perilousness but also spontaneity and high energy. On paper that sounds like every other rock band worth a damn but with elements of noise rock, garage, jazz, and no wave, Parlor Walls are a hard band to pin down. A lot of acts boast sprawling sets of influences these days, but what makes their debut full length, Opposites, special is how visceral and deeply felt the music is.

“We wanted sincerity and we wanted to push ourselves,” Lamb says. “We didn’t want to be boxed in. We weren’t aiming for a specific sound, we were just aiming to be true to ourselves and be very open.”

Lamb’s eclectic musical tastes started early. Originally trained as a dancer, her influences ranged from Debussy to Janet Jackson and Madonna before she was introduced to PJ Harvey at the age of 12 and sought to “play the fuck out of my guitar” as a result.

“I worked at a record store for a few years and became the ultimate sponge,” she says. “I got into Glenn Branca, Pop Group, Can. This is where I first heard [Duke Ellington’s] Money Jungle and I flipped out.”

But even with such a broad selection of music to pull from, Lamb reveals that much of the influence behind Parlor Walls’ comes from musicians closer to home. Lamb fronted the noisy Brooklyn post-punk trip EULA for several years before she started playing with Mulligan in 2013. While there are some similarities between EULA and Parlor Walls–”You may hear a few screams here and there that are similar,” she says–her creative partnership with Mulligan makes her new project a much different beast.

“Chris and I met while playing music in other projects,” Lamb says. “Our energies were very similar at the time. We yearned for a fucked up sound”. After deciding to play music together the two holed up for several months and “played as loud and as fast and as aggressive as our hands could manage.” After a bit of editing, those sessions became their self-titled debut EP, released in late 2014.

“The formation and cultivation [of the group] was very organic and still is to this day,” Lamb says. “We try to remain open conduits.” The collaborative energy between Mulligan and her continued to define Parlor Walls at its core, even as they introduced new elements like saxophonist Kate Mohanty, a previous collaborator with Lamb in EULA, on their second EP CUT. And it’s still present in their current incarnation, which pairs Lamb’s guitar and Mulligan’s drumming with Jake Shelton’s looping and clarinet.

Opposites, which was released earlier this year, seems like the most complete encapsulation yet of Lamb and Mulligan’s creative mission. New songs like the slow-burning “Play Opposites” show off the group’s gift for setting compelling sonic moods, as well as its knack for spiking avant-rock experiments with catchy hooks.

The less scream-centric nature of the band also brings Lamb’s talents as a lyricist to the forefront. “Lyrics have always been extremely important to me.” she says. “They are never superfluous. I feel every word I write. In Parlor Walls, I write as many lyrics as a song calls for.” That explains the crackling intensity of a song like “Birthday,” but not all of Parlor Walls songs rely on narrative songwriting. “On some songs I will write a complete narrative and run with it,” Lamb explains. “Other times, I feel the song calls for abstraction so my lyrics are more stream of consciousness but always containing a central theme.”

The bristling “Cover Me” finds Lamb caught between a need for affection and that need being wrapped up in someone not necessarily willing to give it. “Cover me, will you please? / Keep me warm, put me at ease,” she begs, before her tone shifts into condemnation. “But you only feed me when you’re full.”

Opposites features three songs from the band’s previous two EPs that the band re-recorded, and in the differences between the versions you can get an idea of how much Parlor Walls relies on improvisation, as well as how much they’ve evolved as an ensemble in the few years they’ve been together. “We felt these three songs fit the narrative of the album but not quite sonically so we reworked them.” Lamb offers. “We wanted to present them closer to our intended vision.”

That vision is beguilingly unique and influenced by the sounds and sights that Lamb continues to soak up like a sponge. She promises that the group will keep pushing further into the unknown, and judging by the creative leaps they’ve made between their first EPs and now, it seems safe to say that it’s a promise that they’ll keep. With their debut full length behind them, heaven knows what their next effort will sound like but it will probably be noisy and it will damn sure be good.

Dante Allington is a Brooklyn based writer, musician, and dumpling enthusiast. Former editor for I Guess I'm Floating and Unrecorded.