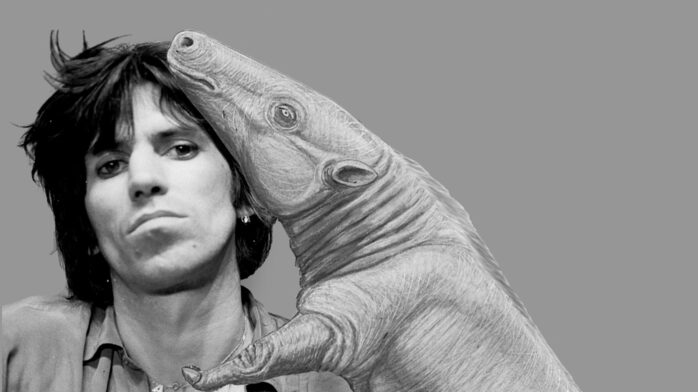 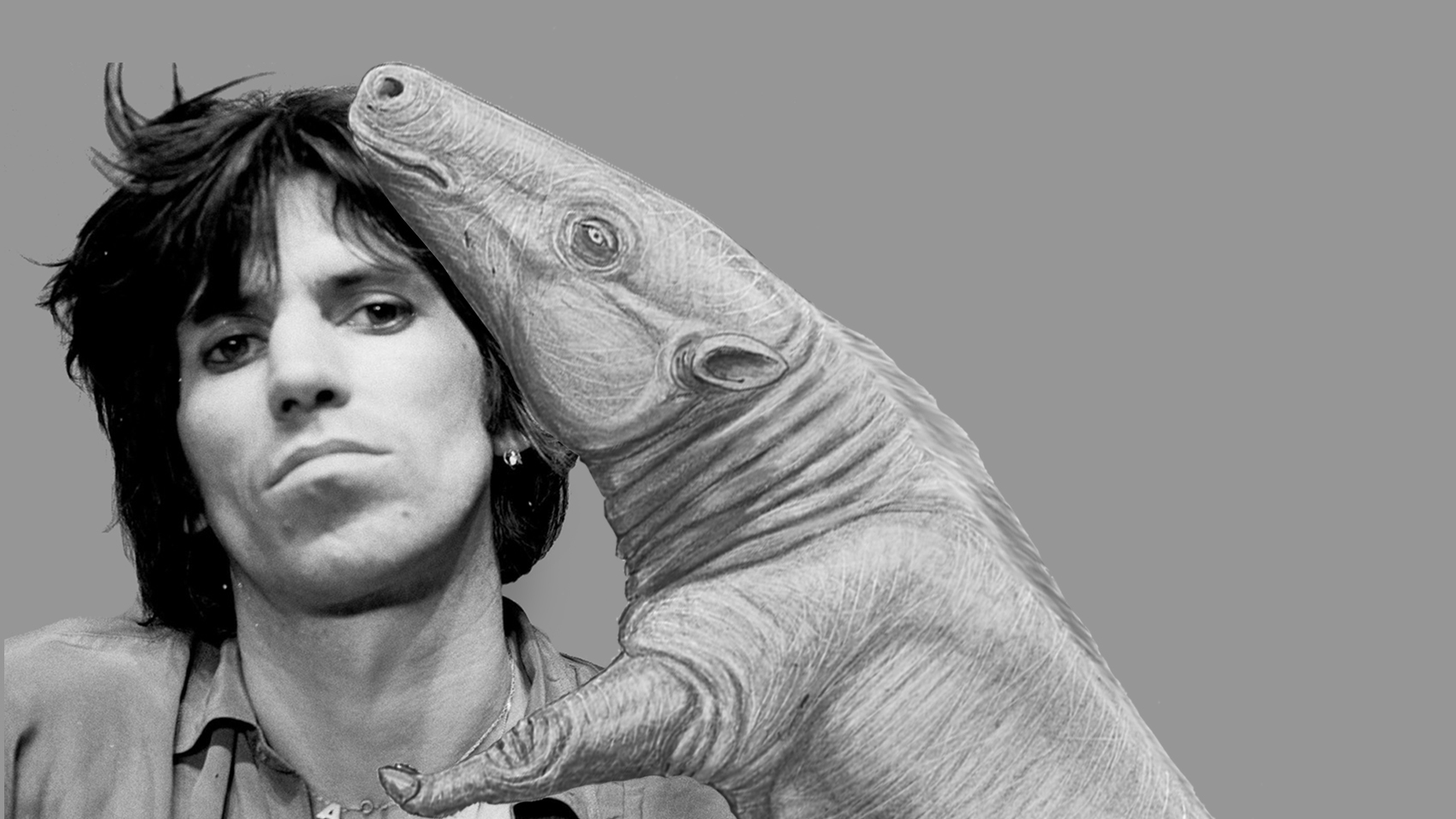 Researchers have the godly power to name new organisms they discover whatever the hell they want. That’s why a cockroach named for Jerry Garcia roams the earth, and why a trio of slime-mold beetles are named for George W. Bush, Dick Cheney, and Donald Rumsfeld.

But scientists aren’t mad, just people who love rock. A tarantula was named for Johnny Cash, but who’s gonna go so far as to say he looked like a nasty spider? And the Ramones don’t resemble trilobites. But the extinct animal that supposedly had big lips like Mick Jagger’s, or the fuzzy yellowy spider that calls to mind David Bowie’s hair in Labyrinth? Now we’re getting into weird territory. Henry Rollins is a jellyfish, Johnny Cash a spider, James Brown is a mite. Each member of Queen has been named for sexually dimorphic damselflies.

Without going too far into scientific taxonomy and dry reasoning, here is a selection of 13 species that most closely resemble its musician counterpart.

1. Frank Zappa as a mustache-twirling spider and an acne-prone bacterium

Frank Zappa has never been one to laze around in just one category of music, adding classical, rock, pop, jazz fusion and other genres to his repertoire. So of course Zappa’s name has been lent to several strange creatures, among them a jellyfish, fish, bacterium and an extinct gerbil (naturally). But it seems the black markings on the abdomen of a female orb weaver spider called Pachygnatha zappa resemble Zappa’s heavy, drippy mustache. Some orb weavers build new webs every day, so sure, they’re prolific just like Zappa. Fun fact: These spiders are also known as sexually cannibalistic, meaning the females eat the males before, during or after copulation.

But there’s more: One guy named a jellyfish phialella zappai basically so he could meet Zappa, since Zappa was once quoted in 1983, “There is nothing I’d like better than having a jellyfish named after me.” Done and done. And a type of bacterium was named for Zappa simply because it was deemed so “unconventional” in its lifestyle choices from other bacteriums, but also because it can cause acne. Since Zappa once wrote about “sand-blasted zits,” that qualifies.

2. Mick Jagger as a saggy-lipped hippo

Everyone knows Mick Jagger is a fossil, but now an actual fossil has been named for the Rolling Stones leader. Illustrations of the extinct Jaggermeryx describe it as a weird, skinny hippo/pig thing which had lips like Mick Jagger’s, illustrated thus, and lived in a swamp during the Miocene era. Holes in the animal’s jaw seem to indicate it had huge, sensitive, mobile, tactile lips. Also, Jaggermeryx literally translates as Jagger’s Water Nymph, so there’s that.

Jagger, who also has a trilobite and snail named after him, was up against some competition for hippo immortality, as Angelina Jolie was also considered in the naming of the extinct animal for her lips. I don’t know who actually wins in this scenario.

3. David Bowie as an yellow-haired spider not from Mars

Heteropoda davidbowie is a large spider with yellow hair that’s only found in Malaysia. Scientists chose genius singer songwriter David Bowie for his concept album The Rise and Fall of Ziggy Stardust and his backing band the Spiders from Mars, but we feel the arachnid bears a striking resemblance to the David Bowie of Labryinth days. Heteropoda davidbowie is a type of huntsman spider, arachnids that are not to be fucked with. They can move pretty fast by utilizing scary handspring or cartwheeling motions. Thanks to these researchers for using the Thin White Duke to bring awareness to this yellow endangered species, also one of the most terrifying spiders out there. They have eight eyes, for fuck’s sake.

On a brighter note, the Spintharus davidbowiei, a smiley-faced spider, was also named for Bowie—black markings on its abdomen resemble a happy face. Bernie Sanders, David Attenborough, and Barack Obama also join the pleasant cluster.

4. Mark Knopfler as a snaggle-toothed dinosaur

Guitarist, film-score composer and singer songwriter Mark Knopfler has received the distinct recognition of being named Masiakasaurus knopfleri, a “bizarre predatory dinosaur” whose name means “vicious lizard.” Apparently whenever the crew found one of these fossils from the Late Cretaceous period, Dire Straits was on the radio. The vicious Masiakasaurus knopfleri apparently ate fish, walked on two legs and was about six feet seven inches tall. So, just like Mark Knopfler? Except it had ”a distinctly heterodont lower dentition,” meaning its bottom teeth stuck straight out, like one giant snaggletooth. Not much like Knopfler.

5. Ozzy Osbourne as a screeching bat-frog

If he couldn’t be named a bat this time around, a “bat frog” is the next best thing for the Prince of Darkness. Discovered in the Brazilian Amazon, male Dendropsophus ozzyi can make ear-piercing, high-frequency chirping calls like a bat, thanks to its large vocal sac. Pedro Peloso, a researcher and post-doc fellow in Brazil, says, “Once the team had brought their treasure back to the lab, we kept talking about the bat frog, which led to us talking about being fans of Ozzy Osbourne and Black Sabbath,” Peloso said. So while this frog doesn’t bite the heads of bats, it at least it sounds like one, once again illustrating the awesome power of being a scientist.

The Doors frontman Jim Morrison is the namesake for Barbaturex morrisoni, an extinct giant herbivorous iguana-type lizard. Just as there’s only one Morrison, barbaturex is the only species in the genus. Paleontologists say it was the largest herbivorous, plant-eating lizard to have ever lived, who easily crushed other herbivorous mammals in the predatory world. Fun fact: the lead researcher is named Jason Head.
According to Head, “I was listening to the Doors quite a bit during the research. Some of their musical imagery includes reptiles and ancient places, and Jim Morrison was of course ‘The Lizard King,’ so it all kind of came together.”

7. Pink Floyd as a pink-clawed crustacean

Some animals were named just because they fucking looked weird. This happened to Pink Floyd. Synalpheus pinkfloydia is a snappy shrimp with a single bright pink claw and an incredible reach of sound—when the claw is shut, the sound of that action can reach 210 decibels, and kill smaller fish nearby. The researchers couldn’t help adding in its research paper that pinkfloydia is “unlikely to occur on The Dark Side of the Moon due to lack of suitable habitat.” LOL.

8. Elton John as a foot-stomping crustacean from Tommy

Leucothoe eltoni is a tiny amphipod whose feet apparently resemble John’s giant oversized boots from the movie Tommy. Dr. James Thomas thought the crustacean, which acts as a benign parasite, has a “greatly enlarged appendage” (calm down, not that appendage) of two external shoe-like body parts that stick out from the rest of its body. Thomas says Elton John popped into his head since his music was a constant in his lab. “When this unusual crustacean with a greatly enlarged appendage appeared under my microscope after a day of collecting,” reminisces the scientist, “an image of the shoes Elton John wore as the Pinball Wizard came to mind.”

Bob Weir, a founding member of the Grateful Dead, has been reincarnated as Lontra weiri, a river otter that lived in the Pliocene era about 3.8 million years ago. Deadhead Kari Prassack properly identified the bones, which had been originally mislabeled in the 1980s. Only a lower jaw and a humerus bone have been found, but that seemingly scant info is enough to link it to today’s river otters. This doesn’t sound all that exciting, except that Weir’s otter is the oldest one yet found. Grateful dead indeed. Speaking about how the Dead formed, Weir once said, “The Beatles were why we turned from a jug band into a rock ‘n’ roll band.” So, the Grateful Dead could have actually turned out like this.

10. Lou Reed as a spider that hoards its dead prey

Loureedia is a velvet (!) spider that lives underground—what more proof do you need when naming an organism after the Velvet Underground leader? Loureedia are found in Israel, so the name is also a nod to Reed’s Jewish heritage. Velvet spiders are pretty colorful and live in underground silken tubes. What’s really badass about Loureedia is that after they kill their prey, whatever remnants are left will adorn the roof of their tube, as one does after murder. Even better, juvenile loureedia also feed on their mom’s dead body.

The spoken-word punk artist has been named for a fossil fireworm called Rollinschaeta myoplena, which hails from the Cretaceous period. Since worms are really soft, they are rarely found as fossils. Also, fireworms have lots of stinging bristles. Yep, that sounds like Henry Rollins.

Since this one had so much muscle tissue, one scientist called Rollinschaeta a “very buff little worm.” According to Dr. Jakob Vinther of Bristol’s School of Earth Sciences: “We informally referred to the creature as ‘the muscle worm’ due to its preservation in almost pure muscle. Part of the reason why it’s preserved so well by muscle is that it was, in real life, a very buff little worm.”

Who wore it best? The lowly, yet built fireworm of course, as fossils are forever, whereas Rollins’ muscles will eventually degrade and vanish after a few short decades.

12. Metallica as a domineering wasp who owns us all

Metallica can join this creepy list as an honorable mention—an organism was named strictly for the band’s name and an album. Metallichneumon neurospastarchus is a parasitic wasp whose Greek name neurospastarchus (“ruler of puppets”) refers to “the weak and mindless nature” of hosts. And because the name is close to Metallica’s album Master of Puppets.

Recently, scientists a Canadian microbiologist named three species of microbes after Rush members Geddy Lee, Alex Lifeson, and Neil Peart, called Pseudotrichonympha, or P, for short. Apparently the scientist was moved to assign their names to the new species, which live inside termites’ guts, due to their long hair and the microbes’ “rhythmic wiggling.” “Basically, (the microbes) bob their heads and thrash their hair around and it just kind of reminded us of publicity photos of bands you see from the 1970s,” says microbiologist Patrick Keeling.

It probably doesn’t hurt that the group sings about science and literature, but the resemblance ends there. Today’s Tom Sawyer is now a termite’s worst enemy.