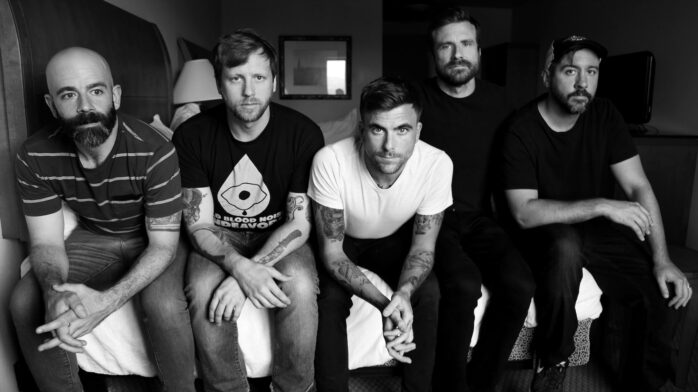 “It’s Okay to Be a Human Being”: A Q&A with Circa Survive’s Colin Frangicetto

If you pick up a dystopian vibe from Circa Survive’s new album, The Amulet, that’s no accident. On top of being recorded during a turbulent presidential election, it also captures a period in the life of front man Anthony Green where he struggled with depression and substance abuse, and the often difficult path away from them. But while it’s arguably Circa Survive’s most personal album yet, it doesn’t lack for the soaring, anthemic songwriting and sharply focused technical skill that the band’s made their signature.

Right now Circa Survive’s on the tail end of a tour with fellow prog enthusiasts Thrice, Chon, and Balance and Composure. On Thursday night the caravan rolls through Chicago’s Aragon Ballroom. Riot Fest caught up with guitarist Colin Frangicetto on a day off from the tour as he prepared to roll into town.

RIOT FEST: How’s the tour been?

Colin Frangicetto: Oh man it’s going awesome. I’m currently on a day off right outside of Chicago. I’m in an Uber headed to Target, which seems like a frequent destination on days off.

You excited about playing Chicago?

Honestly, since we started touring over a decade ago it’s always been a place that’s kinda wild for us. It’s a beautiful city anyway. I’m kind of an art nerd and a design nerd, and there’s a lot of cool designers and artists that are from there. It’s just a cool place to hang out. Show-wise, I don’t think we’ve ever had a bad show in Chicago.

[laughs] Not necessarily, but I’ll say there’s a lot of nerdy talk. There’s definitely like a bit of “amount of notes played” and “various time signatures” envy. There was an actual discussion of whether or not maybe one of Chon’s songs probably has more notes played than any of our sets all combined.

You guys go way back with Thrice, right?

Your new album, The Amulet, has a lot of songs about Anthony’s struggles in his personal life. I was wondering how the music behind the lyrics reflects those themes.

I think in general as a group we’re really close. Especially now at this point, we’ve been through a lot together. I mean, when you’re together for 13, 14 years without even trying you just go through these periods of time that are really important transitional periods in your life. We started the band when a few of us were in our very early twenties. Steve was even younger than that. So going from that to your mid-thirties, where…we were kids when we started it and now half the dudes have kids. There’s this huge, long trajectory of what happens in your life during that time. So we shared a lot of those life experiences and changes. So yeah, where Anthony’s lyrics are driving a lot of the content, in a lot of ways, he’s speaking for us and writing songs about what’s happening in our personal lives as well. We just trust him that way and he always comes through. Musically, we do the same thing for him. I don’t know that it’s ever super deliberate in that way, like, “Oh, let’s filter Colin and Nick’s divorces through the lens of this time signature.” It’s not like that. It just happens.

Is there a particular line on the album that’s your favorite?

Oh my god. This record has so many. I really think this [album] is absolutely the best lyrics Anthony’s ever written. It makes me so jealous as a writer. But it also makes me super proud to be in the band. But there’s a line in “Rites of Investiture” where he says, “You have the right to stay sedate,” and I think that’s such a beautiful, almost controversial thing to say. I think it just really spoke to me when I read it. You know, we were recording this record over the transition of the election. We started this record in a pre-Trump era and ended it in, you know, the Trump era. It was very strange. It was a very crazy thing to be witnessing while you’re in the middle of documenting a moment in time. I think there’s a lot of panic, a lot of uncertainty, a lot of fear. And a lot of feeling like you have to do something right now. [The line] could easily be misconstrued as “it’s okay to do nothing.” I don’t think that’s really what Anthony’s trying to say. I think he’s trying to say it’s okay to want to numb out sometimes. You don’t have to be watching CNN 24 hours a day and constantly putting your own mental health at risk in the name of like saving humanity. It’s okay to be a human being. I felt like that was a really powerful thing to say.

Would you say there’s a spiritual element to what you guys are doing?

Yeah, definitely. None of us are, at least to my knowledge, practicing religious people. At the risk of sounding cliche, music for us has always been sacred. It’s always been spiritual. In high school, for religious studies, we were supposed to create our own religion, and I basically made my whole project about punk rock and how, for me, it functioned as a religion. I kind of hold that in a way to be true still. Aside from some transcendental meditation-slash-psychedelic experiences that I’ve had, the times that I feel the most connected to the universe and humanity and the collective unconscious is when I’m performing with these guys. There’s something completely magical about it. I don’t even know how else to describe it.

Some of your stuff, like the video for “Premonition of the Hex,” has a real sci-fi feel to me. Is that an inspiration at all?

Oh sure. I think in general when it comes to fictional narratives [they’ve] always been a part of the band’s creative well that we’re tapping from. Science fiction and probably more like dystopian concepts are pretty consistently popping in and out. Now more than ever as we see technology changing our landscape on a daily basis. It’s kind of impossible for it not to rear its head. Especially with five guys who grew up obsessing over Ridley Scott movies and shit like that.

There are still a few tickets left for Thrice and Circa Survive’s co-headline show with Chon and Balance and Composure at Chicago’s Aragon Ballroom this Thursday, December 7, a night which will most likely live in infamy.