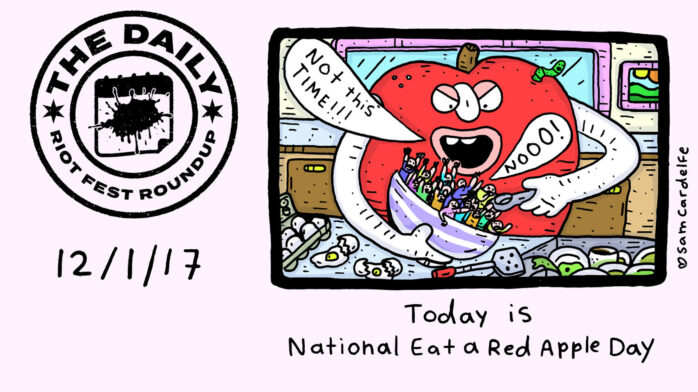 Riot Fest interviews Riley Breckenridge from Thrice. See them at Aragon Ballroom with Circa Survive, CHON and Balance and Composure on December 7th!

“We’re Not Afraid To Do What We Want To Do”: A Q&A With Riley Breckenridge from Thrice

Riot Fest Deluxe VIP Early Bird Tickets are SOLD OUT. I would suggest getting your GA, VIP, and Ultimate VIP Tickets before it’s too late.

Glassjaw has a brand new album and you can stream it here.

Help us collect coats, scarves, hats, and gloves for our winter coat drive.

Help Us Collect Coats, Hats, Gloves, and Scarves, And Let’s Share The Warmth

Do you ever eat the end pieces of the bread loaves?

Wondering if our colleague that’s on this list can pick us up on the way to the Stones concert?

Could go without seeing one of those 30 CEOs in the Music Business lists ever again. Buncha suit-jacket-with-jeans corner-office motherfuckers who Uber Black to and from the one concert they go to each year (Rolling Stones).

Hey, Rounduppers (just made that word up), for the hundredth time, it’s pronounced “HAWS”

I was able to keep my tour PMA pretty sturdy, but I lost my beautiful Adidas shoes, black sweater and Eagles T shirt at the NYC venue last night and now I’m vacillating between mad as a hornet and just plain crumbed. pic.twitter.com/KyhmXh1reZ

Deadspin for the victory.