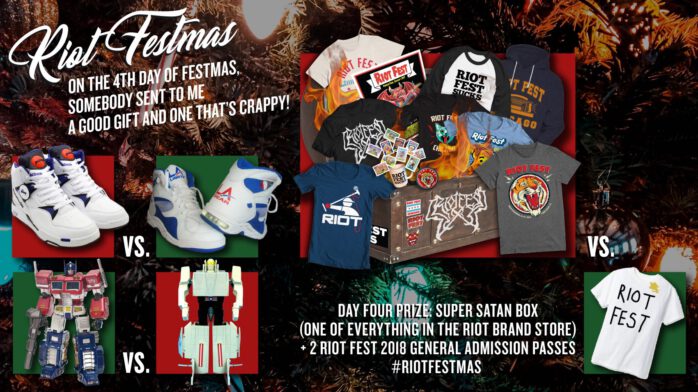 On the 4th Day of Festmas, Somebody Sent to Me: A Good Gift and One That’s Crappy 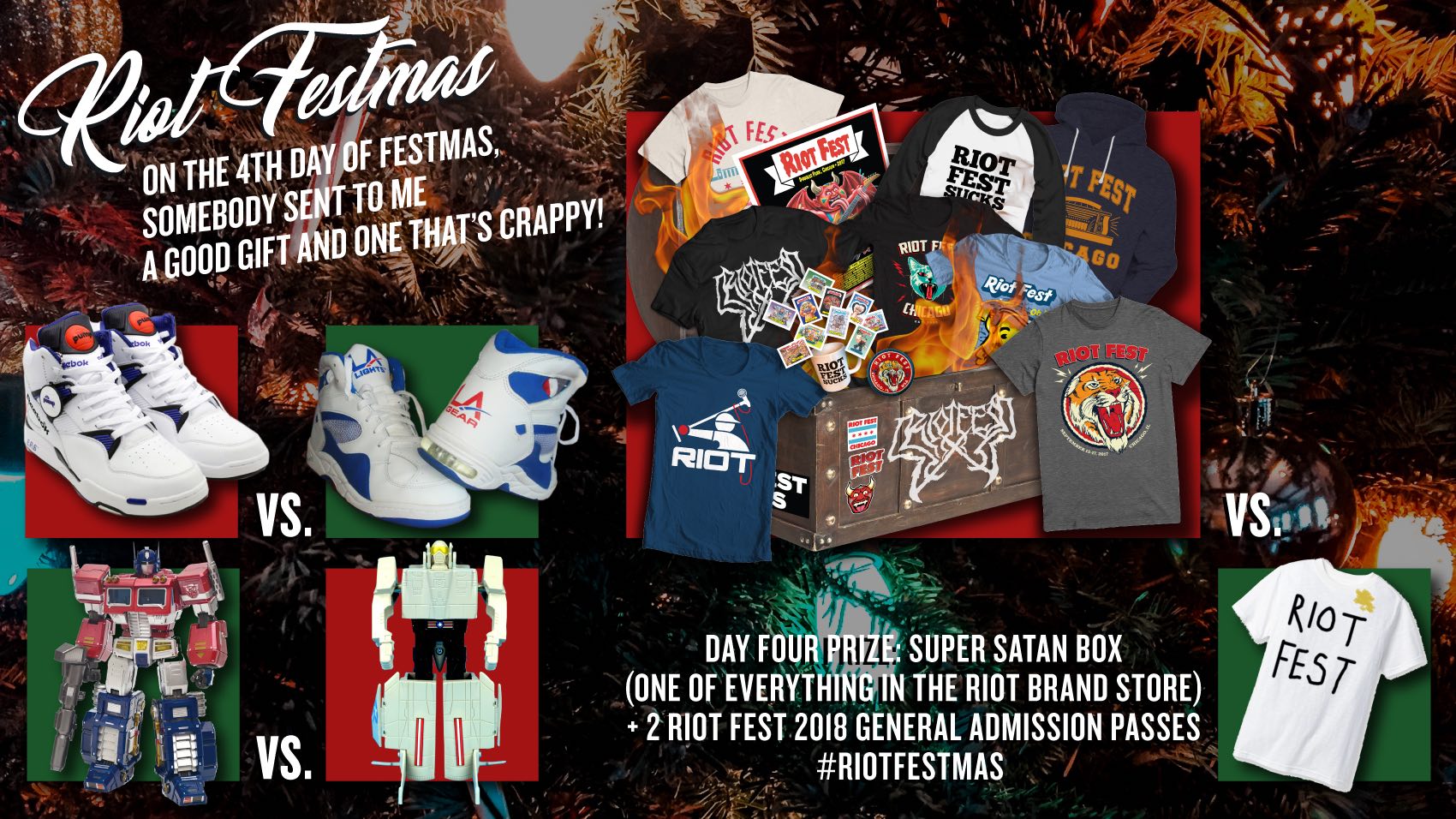 Here at Riot Fest, we care about you and your money, but mostly the money. That’s why we’ve curated the ultimate gift guide for 2017. With all the money you save with this advice, you may want to pay it backwards to us, by buying Holiday Presale Tickets.

But enough about us… we’re here for you, the consumer. We like to give you some variety, so we’re picking the best and worst gifts in each category. Oh and in a few paragraphs, there’s a dang CONTEST, so you’d better keep going….

Lollapalooza, the granddaddy of Chicago music festivals. The pageantry! The culture! The branding! Lolla has it all, and with tickets starting at just $2,200 for a four-day VIP pass (plus $61 in fees, and you can pay an extra $7 for a fake backstage laminate; probably available at their website), show your loved ones that you really, truly care.

On the low end of the Chicago music festival spectrum, you have Riot Fest. We don’t pull in the caliber of talent that Lolla manages to swing, but we do have corn dogs and a ferris wheel. So, there’s that. Riot Fest’s Holiday Presale Tickets start at just $149.98, but only until noon CST today, when the prices increase. Riot Fest tickets are available now at Ticketfly.

Speaking of Riot Fest, if the folks on your list appreciate fine cotton, then you may want to pick them up a Super Satan Box over at our online store, RiotBrand.org. For a pittance of $750, you can purchase a large box that contains every single item in stock!

Or, you can enter to win it and save a little dough. Riot Fest wants to know the worst holiday gift that you’ve ever received. Simply share your horror stories in the comments of Riot Fest’s Facebook or Instagram, or reply on Twitter with the dirt, and you’ll have a chance to win the Secret Satan Box! Which, once again, contains one of everything in Riot Fest’s RiotBrand.org store. Winners will be announced tonight at 7:00pm CST.

If the cotton lover in your life isn’t worth $750 or a simple social media response, then pick them up a three-pack of Hanes white shirts ($8.44) and a Sharpie (starting at $3.25 for a pack of three) on Amazon and make your own damn shirts, you cheap bastard.

John Stamos (priceless), is there anything you can’t do? Have a baby at 54?! Don’t mind if you do! In fact, will you please be our father? We promise to not cut off your hand. Speaking of priceless, keep an eye out in the new year for the John Stamos Art Auction.

Like us, I’m sure you’ve always wanted to play holochess, like they do on the Millennium Falcon, yeah? Well, now you can, nerd, with Star Wars Jedi Challenges ($200 at Lenovo.com) augmented reality kit! You can also have real (fake) lightsaber battles! We wonder if you can smoke womp rats with this thing. Or drink the blue milk? Ah crap, now we’re the nerds.

If you want to get something Star Wars-y, but aren’t a stickler for branding and copyright laws, Star Warsiors toys (Some amount of yen, a long time ago in a country far, far away. See more at this dude’s website) are your best bet. However, good luck finding them. You’ll need a Wise Puppet to help you, young Karate Farmer. Just look out for Door Ladder! I think he may be your weird uncle or something. 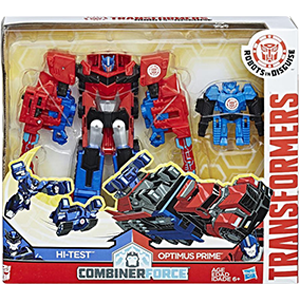 Get the Transformers Movie Anniversary Edition Optimus Prime (exclusively on Amazon for $79.99) for somebody on your list, and then hold your head up high.

Get them some Gobots (Prices vary, go eBay that shit), and you might as well take a dump on their doorstep.

The pictured indominus rex (from Jurassic World) can be stolen for $672.32 (as of press time) on eBay, but there’s no accounting for how deeply she’ll steal your heart.

If you want to find the Dino Nuggets, Aldi it up, my friend! But you probably don’t want to.

Williams-Sonoma sells a lobster mac and cheese for $129.95. Turn the carb-and-seafood lover in your life on to the finer things.

Or, if you’re mad at them, just heat up some leftover mac & cheese (priceless)(and tasteless)

If you want to buy a nice gift for the folks on your enemies list, make sure to get them something involving the devil’s fruit: cantaloupe (worthless). Edible Arrangements has gift baskets starting at $19 at their website if you’d like to hide it amongst other fruits. Or, be a dick and just buy them an entire cantaloupe. Fuck ’em.

Due to simple mathematics, 30 White Castle sliders will produce half as much crap as 60 sliders. We checked. That’s why you should only get one Crave Case (30 sliders; $20 for hamburgers, $25 for cheeseburgers), instead of two. They’ll always make more, you weirdo.

If you can find a CD player, you can get American Idol sensation William Hung‘s poignant and timeless holiday record, Hung for the Holidays, for $49.99 on Amazon. This thing bangs, it’s so worth it! Two thumbs up! Or whatever they said on that dumb show.

Nobody could ever tell us what kind of difference the pump part of Reebok Pumps made, but this website has them for sale, starting at $69.91, so let us know if you figure it out?

If your loved ones want to be really bad at avoiding attention at night, then L.A. Lights from L.A. Gear are the sleds for them. Apparently they still make them, and you can buy them on their website, starting at $100 (but only if you’re a woman).

Not sure how much Patriots season tickets cost cost, and there’s a big-ass waiting list; but it’s probably worth it because Tom Brady is such a hunk, and the Bears don’t play there too often.

Speaking of Chicago’s professional football team, they suck, eh? You can buy somebody else’s personal seat license for way too much money at the Bears website, but after all that further review, chances are that they will still suck.

If you want to be part of a winning football team (ours), check back with your Riot Fest pals at 8:00am tomorrow morning for a little Sunday pigskin magic…