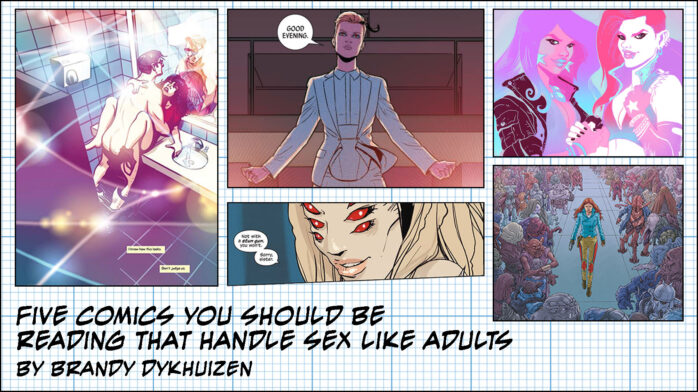 Five Comics You Should Be Reading That Handle Sex Like Adults

Outside of some curious corners of the underground, the history of comics and sexuality is…not so great. You know the books I’m talking about, blazoned with buxom ladies who are surely fracturing their spines in order to take on the bad guys, while also giving you a clear view of their goods. Or, even worse, hyper-sexualized characters who are clearly nowhere near their 18th year. If you love comics but are itching to take a break from all that drivel, dig into the list below. We’ve recommended a handful of books that approach sex the right way: like it ain’t no thang, and something we should all be having more of… no matter if we’re straight, queer, cis, trans, non-binary, robots, or whatever.

One part pulp fiction, two parts psychological acid trip, all parts relationship goals, Sex Criminals starts as a young girl’s awakening into the electric haze of masturbation and ends in an orgasmic crime caper like no other. We’ve all used sex to drown out some of the utter shite the world has to offer, but all too few of us can freeze time during an orgasm and use that power to save the local library. There’s something a little Schopenhauerian about viewing the world through the filter of fucking, but at the end of the day, we’re all just meatbags looking to get laid. Fraction even includes a few PSAs here and there, postulating the crazy notion that fewer kids would get knocked up if they had access to sex ed, and reminding us in a firm tone that sex workers are, in fact, people too, whom you should neither shame nor poke fun at. The only crime here was having to wait an entire month for the next issue.

There’s not a lot of overt sex in the pages of The Wicked + The Divine, but its astral approach to gender roles earns it a top spot on this list. Somewhere between the self-professed chasm-cunted character Badb and a New Wave-inspired androgyny in spades, WicDiv wastes no time mulling and mewling over the social structures of sex. The members of the protagonists’ gang, Pantheon, slip between genders and sexual preferences as fluidly as they exchange the mortal bodies that house them. Because really, how else should one spend eternity?

Saga’s distracting anatomical oddities come in the form of eight-legged bounty hunters, horned humanoids and torso-less sex workers rather than massively cleavaged superheroes battling villains in ludicrously backbreaking, T&A-highlighting poses. Sex is mostly relegated to a basic bodily function in this world, much like scratching an itch or taking a poo. It’s necessary, but you’ve probably got more important things to think about, like sustaining life or going tete-a-tete with the kind of creature who would sell a child as a sex slave and squishing his freaky fish head like a goddamn overripe melon. But as low-key as the actual act of copulation can be, it also has the power to launch intergalactic battles, the memories of which will kill a Prince’s erection down the road. Ah, the circle of life.

Double the Kim, double the adventure, double the trans feminist ass-kicking. Kim D. and Kim Q. cruise through pop punk space montages bounty hunting with the best of them, ridding the universe of vermin, running out of gas, and ransacking the last of their funds to buy booze. Occasionally pausing to mull over their sex lives and figure out just how to navigate this crazy life, a trans voice provides a much-neglected filter through which to view Visaggio and Cabrera’s take on the limitations of hard work, friendship, family and infinite galaxies. Both Kims’ sexualities are at the core of their being without consuming them… and why would it? They are who they are, dammit, and whether that means space bounty hunter, bisexual and transgendered work buddies, or glittery rock goddesses, they are gonna get the job done.

Clearly this is the point at which I ask myself if there’s a correlation between bounty hunting in space and queerness, or whether it’s just a genre towards which I gravitate. Or both. In Satellite Falling, a grief-stricken free agent is forced to track down her ex-girlfriend, facing her bereavement and possible betrayal all at once. Steve Horton employs a few creative elements to illustrate running away from versus embracing your sexuality. Our protagonist projects holograms to trick the baddies into thinking she’s someone she’s not, then runs away (thus plunking herself straight down in the middle of a metaphor). Another character employs her true shapeshifting abilities both on the job and in the bedroom purely for pleasure — the ultimate gender fluidity. If the stunning artwork doesn’t keep you coming back to this book, the subtle commentary on staying true to yourself should be enough to drag you in.