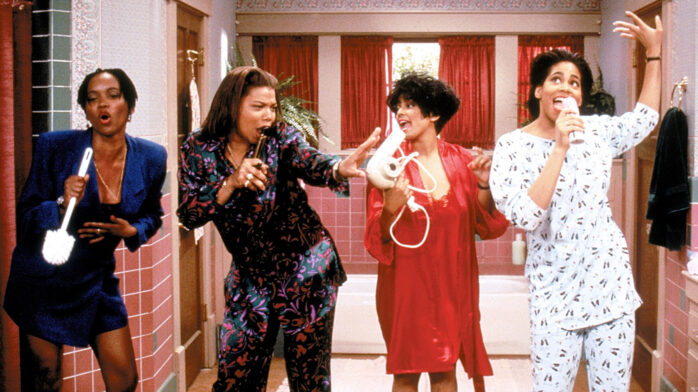 Why You Should Be Binge Watching ‘Living Single’ Today

Well, not just because I’m black.

The series was just released on Hulu and in just a few short days, people of all creeds have binged themselves back into the 90s kind of world where a magazine editor, her ditzy-but-sweet cousin/secretary, and a shallow boutique buyer could afford a two story apartment in a brownstone in Brooklyn.

Queen Latifah stars in this proto-Sex and the City, proto-Girlfriends sitcom about single life for Kadijah James, founder of Flava Magazine. While struggling to keep the urban lifestyle mag afloat, she depends on her roommates Synclaire James and Regine Hunter for laughter and support. They deliver, but not without some real good Golden Girls-esque shade being tossed around all willy nilly by the roomies, their upstairs neighbors (the narcissistic, but worth it Kyle Barker, and everyone’s favorite simple, doting handyman Overton Wakefield), and Black Kramer, Maxine Shaw, Attorney At Law.

This show hits all of the retro sweet spots for people too young to have seen it during its initial run, in its fashion (so many chokers) and slang (Things are wack again! Yay!).

But, this Hulu rollout feels like it was made for me. It’s winter, and I need comfort and joy. And, I honestly can’t think of anything more joyous than Queen Latifah from when she was trying to figure out her Will Smith path.

Nothing brings me greater comfort than the sound of Kim Coles’ Synclaire whispering “Woo woo woo” to a friend in need.

And nothing makes me happier than a solidly delivered burn by Regine or Maxine.

Stream it! Binge it! And, if you figure out how the dancer in the opening credits does that windmill thing with her arms, TEACH ME IT FOR GOD’S SAKE I’VE BEEN TRYING TO FIGURE IT OUT SINCE HIGH SCHOOL.