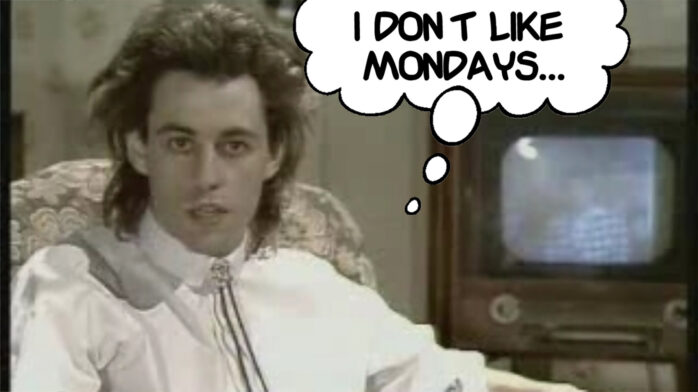 On January 29th, 1979, using a rifle her father had given her as a gift, 16-year-old Brenda Ann Spencer killed two people and wounded eight students and a police officer when she opened fire on children arriving at Cleveland Elementary School in San Diego located across the street from her house.

During the standoff, when a reporter asked why she did it, she said, “I don’t like Mondays. This livens up the day.”

According to a report written by the police negotiators who spoke with her during the six-hour standoff, she also said, “There was no reason for it, and it was just a lot of fun”; “It was just like shooting ducks in a pond”; and ” [the children ] looked like a herd of cows standing around, it was really easy pickings.”

On July 21st, 1979, the song “I Don’t Like Mondays” was released by the Irish band The Boomtown Rats. It was a number one single in the UK Singles Chart.

The song, written by Bob Geldof, was inspired by the shooting after he heard about it when touring in Atlanta:

Geldof reportedly wrote the song on the spot. It was first performed live by The Boomtown Rats only a month or so after the shooting.

The family of Brenda Ann Spencer tried unsuccessfully to stop the song from being released in the United States. “I Don’t Like Mondays” reached #73 on the US Billboard Hot 100.