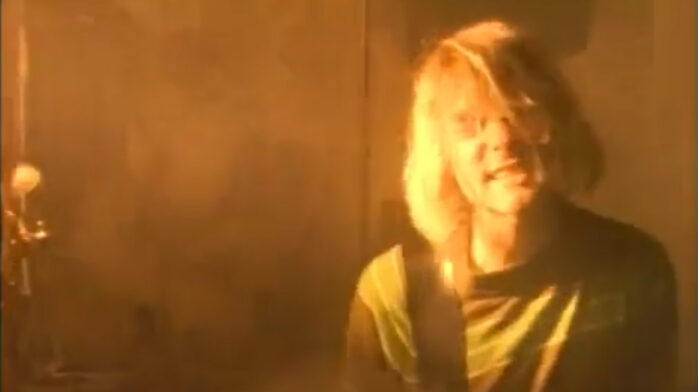 Some monster, aka Sleep Good, just pitch-shifted / auto-tuned Nirvana’s ‘Smells Like Teen Spirit’ into a major key, and now it sounds like an Everclear, Gin Blossoms, or Spin Doctors song from the 1990s.

I’m seriously waiting for Jason Biggs to walk through the door acting all sad. It sounds like a Weezer cover band covering a Third Eye Blind song.

As Reddit points out, the new song, titled Nirvirna – Teen Sprite, hasn’t just simply been changed to a major key, there are other changes, too:

Wait hold up. While this may in fact be in a major key, it’s not like whoever transposed it just changed the 3rds 6ths and 7ths to major 3, 6, and 7ths. They completely rewrote the song.

I don’t want to look too much into the song to find out the actual key signature, but if I remember correctly, and it doesn’t change key after the intro, it’s in F minor. The original intro would go: From the 1st, up to the 4th, back down to the minor 3rd and then up to the 6th.

This song does something where it goes down from (I’m assuming the first) it’s tonic down to its 4th which is going to create a much more bubbly feeling.

I guess that in the end it’s still a version of the song that’s in major, but I feel a little bit slighted. The composer made some large jumps to make it sound even more bubbly which I feel takes away from the experience.

Whatever the hell they did to it, I feel weird now. I think I need a shower.