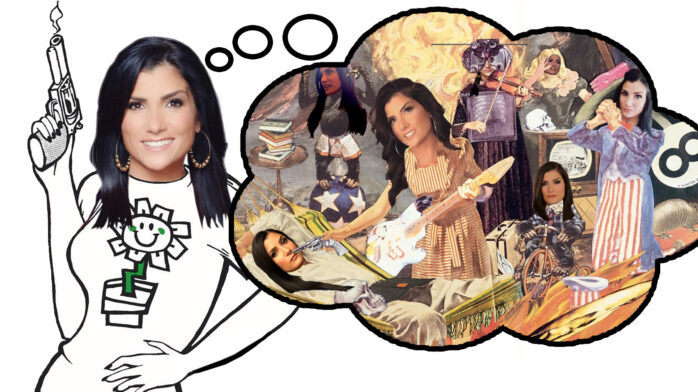 Wednesday kicked off the 45th edition of the Conservative Political Action Conference (CPAC), the annual gathering of right-wingers who pay to sit through speeches and panels about guns, taxes, and as one upcoming panel title states, “Kim Jong Un-iversity: How America’s College Campuses Are Turning Into Re-Education Camps.” (Think a Star Wars convention but for people who thought the Galactic Empire were the good guys).

Normally, we wouldn’t write about this, since the grotesque and offensives ghouls we typically cover are members of GWAR. But this morning, in a speech delivered by NRA spokesperson Dana Loesch (you may have seen her fear-mongering videos posted on your uncle Jed’s Facebook), she had some choice words for long-running punk band Green Day. Railing against the FBI and mainstream media, she said, “I’m allergic to universal statements just like I’m allergic to people who say Green Day is punk.”

While there’s a possibly valid critique to be found about the band’s post-American Idiot oeuvre, calling one of the most iconic and universally-considered punk bands not punk is an interesting take. I mean, come on, has she even heard Dookie, one of the best ‘90s albums ever? In their defense, the CPAC audience, who presumably have Ted Nugent’s “Cat Scratch Fever,” Kid Rock’s “Bawitdaba,” and Lee Greenwood’s “God Bless The U.S.A.” on a Spotify playlist somewhere, either did not get the joke or vehemently disagreed. (Video evidence is inconclusive).

It turns out, this isn’t the first time Loesch has used the California-based trio as fodder for a joke. A dogged investigation by Riot Fest found that Loesch has historically hated Green Day with the same ire she usually reserves for SJWs, victims of mass shootings, and people who read. Below is a short history of Loesch’s hatred for Green Day.

Green Day was cooler (well, as cool as pop-punk can be) before they got old and cranky.

This zinger is a slow burn.

One of the people hating on Nugent in email praised Green Day. That’s all you need to know. #THEYARENOTPUNK

Hold on a second….

So the new standard is punching people in the head because you don’t like their question/appearance ? Well, I don’t like Green Day.

Don’t you dare put the Spin Doctors in your sights.

Green Day would still suck even if they were apolitical.

Do. NOT. write about punk and quote Green Day, the JC Penny of punk, in your 2nd graph. https://t.co/KUmuA5Js1W #DanaRadio

Dana, if you search “Josh Terry” on Spotify, I have some cool playlists. Please follow me. Also, who do you think is the TJ Maxx of punk? The Filenes Basement of punk? The Hot Topic of punk?

What did Fleet Foxes ever do to you? I thought their last LP was adventurous and immaculately arranged.

Everyone has to abide by my decrees now. I outlaw disco, tofu, and Green Day.

As of press time, Loesch and the NRA have not responded to a request for comment; we asked nicely and everything.

Green Day politely declined to comment; how punk is that? (It’s punk AF.)