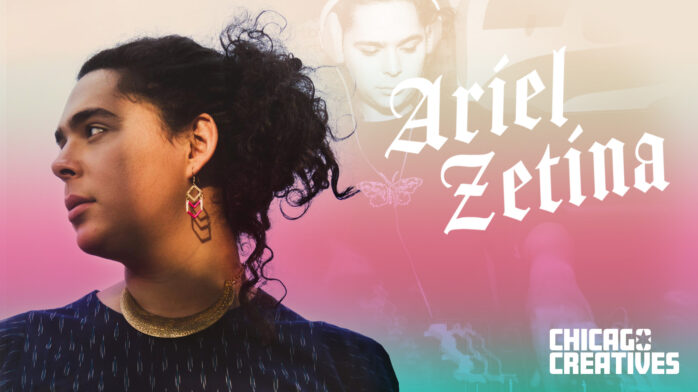 Chicago Creatives: Ariel Zetina is the Mother of the Windy City Club Scene

Even when her work explores the dark, abrasive, and traumatic, Ariel Zetina’s goal is to make you dance. The Chicago-based playwright, producer, and DJ’s aesthetic delights in the unexpected; she often uses a danceable four-on-the-floor beat structure as a Trojan horse to shepherd strange, glitchy, and transgressive sounds and themes onto the dancefloor. She emphasizes the contrast between a binary beat and more organic elements, building rhythms out of static, camera flashes, and garbled, looped snippets of speech.

The twenty-seven-year-old Chicago-based artist keeps a packed schedule. She currently holds a residency at legendary dance club Smartbar. Her party Rosebud at the historic Berlin Nightclub in Chicago’s Boystown neighborhood incorporates film, visual, and installation artists as well as those working in sound, encouraging attendees to dress up and find themselves. If that’s not enough, she’s the organizer of Ariel’s Party at cozy venue the Hideout and a resident at the Rumors club night — which recently relocated to the popular Logan Square destination, East Room.

While she’s best known these days as a DJ, Zetina’s background is in performance art and playwriting. Since relocating to Chicago six years ago, she’s created connections with a larger community of queer and/or transgender people of color that have empowered her to tell her story on stage… and from behind the DJ booth.

Zetina spent her formative childhood and teenage years surrounded by Confederate flags, pickup trucks, and Baptist churches on the suburban outskirts of Jacksonville, Florida. “It was a very white community,” she tells Riot Fest. “Any Latinx culture I have is from my own family, not from the larger community I was living in.”

Her mother is from Belize; while her father is a white American. They met while he was serving in the Peace Corps, and her mother immigrated at age twenty-five. Zetina returned to Belize to visit family every summer until she was twenty-one.

“Belize is such a weird place,” she explains. “There are so many different ethnic groups; Latinx Belizean is what my family is. Most people in Belize are Garifuna. There are a ton of Taiwanese people there, and a ton of British people because it was a British colony. They speak an English Creole that’s like English, but with a little bit of Spanish and Maya in it.”

At eighteen, Zetina fled the Wonder Bread repression of her Florida hometown to Evanston, Illinois, where she attended Northwestern University for theatre and creative writing, with a focus on poetry. That led her to meeting Imp Queen and DEV_N_, her collaborators in the performance art group WITCH HAZEL.

While putting on performances with WITCH HAZEL — including FISH, a Disney-inspired trans-lensed riff on The Little Mermaid — Zetina discovered that none of the electronic compositions she was using were specific enough for the experiences she wanted to create. She began experimenting with production to create her first songs from scratch, which would go on to become the soundtracks to WITCH HAZEL’s performances.

It was after moving Chicago in 2012 that she was finally able to express herself fully, both personally and artistically. “When I first moved to Chicago, I was going to Chances Dances and Salonathon a lot, and at the time I think I’d never been around trans women before,” she explains. “I’d never really been around queer people before.  I feel like once that was happening, I was allowed to grow into myself.”

Her newfound identity and community helped her to evolve towards a darker house-and-techno-based sound in what she calls her “baby trans girl days.” She originally created all the tracks on Cyst, her 2017 solo EP, for live performances. According to Zetina, the tracks turned out “really raw and make you dance, but they were also collaborations with other trans women,” she says.

“Cyst” was originally a collaboration with Alessa Schmalbach, who DJs with a futuristic alien-like aesthetic under the name Pollination Tech. “Addy” features a strong vocal performance from underground rapper London Jade. “Pearls” originated from a project with Imp Queen.

If you pay attention to the track titles, you’ll notice each is named after something small and round. “I think honestly, all three of those things are such solid-ass representations of trans culture at the moment,” Zetina explains. “None of this is written down anywhere, but to me that EP feels so representative of what I’ve been doing for the past three years.”

Her other releases include WITCH HAZEL’s GODZILLA EP (which came out on Pedicure Records in 2015), a track on Oakland-based Club Chai’s first compilation, and a twelve-minute long song out on the label SHXME. She also executive produced Imp Queen’s Magenta Agenda EP, the Chicago drag star’s clubby, hyper and humorous project that grew out of the shared language the pair has developed to describe queer culture and the transfeminine experience.

“We both manifested something with our careers for which we had no formal training,” Zetina says, reflecting on the path that lead both her and Imp Queen from the dorms at Northwestern to dominating Chicago’s nightlife.

“That’s the beauty of producing a lot of stuff really early into your career and putting a bunch of stuff out, because all these little projects ended up becoming something bigger. [Magenta Agenda] was never intended to be an EP, but we just kept releasing, we kept working on projects.”

Zetina draws strength from her community; she is surrounded by other artists who support her and understand her work. There’s Itsï Ramirez, a DJ who can be spotted mixing loud, abrasive music at clubs across Chicago. Zeynab Gh, who produces architectural and industrial electronic music under the name Thoom. Also, there’s Itunuoluwa Ebijimi, a.k.a. Petty Crocker, a young entrepreneur who runs the Petty Butter skincare brand, and Jesus Hilario and Ashara Renfroe — the masterminds behind a recent underground party Hollyhood.

Like any mother, Zetina’s sense of identity is based around her family. By tirelessly working to create transformative spaces for her queer and brown kin, she’s creating exactly what she once needed: a dark dancefloor where you can be yourself, surrounded by people who understand.