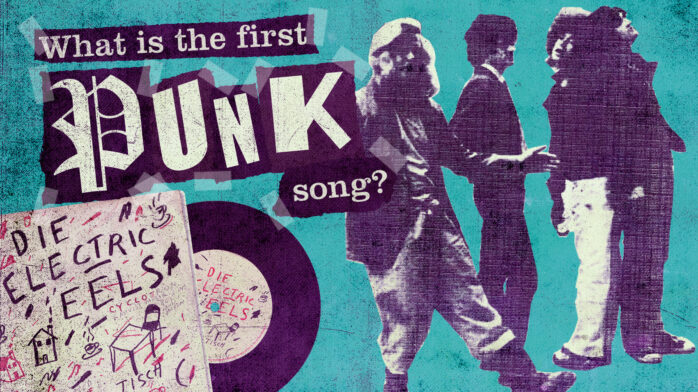 Is “Agitated” by Electric Eels the first punk song?

The Electric Eels formed in Cleveland, Ohio (oh, that Cleveland!) in 1972, when pretty much anybody else you’d attempt to argue in vain as being the composers of the first punk song were in short pants, and/or long hair and glammy glam makeup. And while “Agitated” wasn’t the band’s first song—and wasn’t even released until 1978 on Rough Trade—it was recorded in early 1975, part of a body of work that was so far ahead and beyond its time that it belongs in a universe of its own.

Ya know what I think?
I think the whole world stinks
And I don’t need no shrink
I just hate it.

I know what you’re thinking, but Dylan wishes he wrote lyrics that great. That’s the Electric Eels’ legendary frontman Dave E. McManus. Those lines—a small sample of McManus’s lyrical brilliance–seem to me to be the starting point of all of this Lifestyle-Soundtrack-That-Won’t-Die when you get down to it.

Those words in “Agitated” say what we all know. The Buddhists made it their first Noble Truth: Existence is suffering. Or, as Rocket from the Tombs, electric eels’ contemporaries in the Cleveland proto-punk music scene put it: Life stinks.

You begin at the beginning, and “Life Stinks” is the source of any punk rock worth a runny malt liquor shit.

How the various groups defined and have responded to that paradigm—for instance Richard Hell, Fugazi, Feederz, Wipers, Bikini Kill, that one poppy punk band who sang about girls—is part of what differentiates them. Life stinks, man… But why? And how and what are you and your little three-chord band going to do about it?

It’s necessary to start there, no matter if one blames those clowns in congress, or the goddamn patriarchy, or boredom b-dum b-dum, teen angst, or existence itself.

Oh sure, all of the above have been in existence since time immemorial, but let’s cut the bullshit and keep some focus and say right here that the first punk song needs to happen in the 1970’s, just as what’s finally happening next is going to come out of this foul time. Anything before that is rooted in the burdens of its own particular time. Shostakovich….Woody Guthrie…Arthur Rimbaud….

90s zines are filled with musings on whether this artist or that historical figure was punk: “Emma Goldman was punk because anarchy, dude!” “Van Gogh cut off his ear. So fucking punk, right?” Jesus. Who cares. This genre got the name in the 1970s. So shaddap, Ken Burns.

Electric Eels were the quintessential parochial school miscreants, and “Agitated” embodies the kind of nihilism that can only come out of lapsed Catholicism and Midwestern isolation. The sneer and the snarl and the vicious humor and just enough knowledge of art and beauty and whatnot to move in the right direction but not so much that it’s precious.

Not that anyone has ever accused the Electric Eels of being “precious”:

The song plods and lurches back and forth between two chords with a couple variations. No bass guitar. And those vocals. Sometimes in early PiL, you hear John Lydon (not unlike a good karaoke singer) trying to convey this sense of everything being one big silly lark. However, he’s too fucking British. He’s too aware of give the people what they want, band as brand, and the music industry.

The Electric Eels weren’t about to waste any time on the music industry. Jeez. Why?

It’s the “EEEWWWWWWWW!” linking the solo to the final verse. Or perhaps the snottiness of the wrong distanced mutant. It’s self-aware, but not as self-aware as they think. The sense that even the outlet, the conduit in which they are expressing the futility and absurdity of life is in and of itself futile and absurd.

I can count on less than one hand those who managed to capture that rare quality for posterity. There’s “Wonderful Subdivision” by the St. Louis, Missouri group Drunks with Guns, and the evergreen classic “Clubnight” by South Florida’s Sheer Smegma (aka Teddy and the Frat Girls).

By this point, I’m not even sure if punk and what punk has become deserves the Electric Eels, or if Electric Eels would even accept this major award as the performers of the first punk song ever. Maybe I should renege on this and give it to fucking Sha-Na-Na instead. (Yes, kids, Bowser was the first punk rocker; if you don’t believe me, ask Ms. Google.)

Despite all that, if we need to give any one song this prize, it goes to “Agitated” by the Electric Eels.

Just don’t expect them to show up and make an acceptance speech… even if it’s in Cleveland.

Electric Eels First Punk Song Ever Rocket From the Tombs