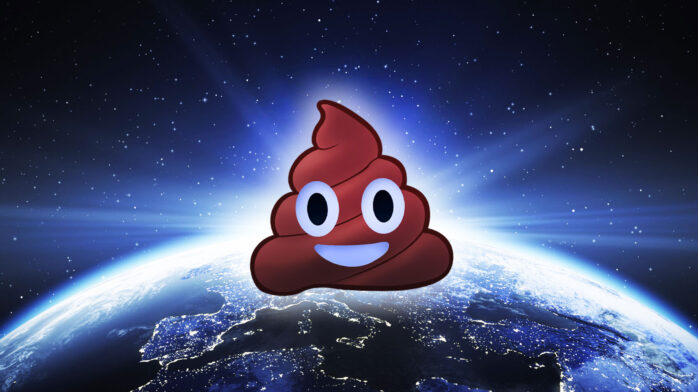 Most people think bathrooms are gross, but that’s where the poop stays, or so you thought. Nope: Poop is everywhere.

This hazard, says Jeffrey Cain, the president of the American Academy of Family Physicians and chief of family medicine at Children’s Hospital Colorado, often goes unnoticed. “Some things we think are personal are actually more public than we imagine.” Bacteria and other infectious agents on a phone can cause flu, pink eye or diarrhea, says Dr. Cain.

That’s what you get for playing Candy Crush on the shitter.

The next time you grab a cart at the grocery store just remember the recent study that found E. coli on 51% of grocery carts. E. coli is poop bacteria. I bet that wasn’t on your shopping list.

Well, at least the clothes you put in the washing machine are clean and free of poop particles, right? Wrong.

Charles Gerba, a professor of microbiology at the University of Arizona, says “If you wash a load of just underwear, there will be about 100 million E. coli in the wash water, and they can be transmitted to the next load of laundry. There’s about a tenth of a gram of poop in the average pair of underwear.” That’s a lot of crap.

The next time you’re at the ATM, just remember those keypads are covered in crap and food particles, but at least the money is clean, right? Wrong. A recent study found more than 100 different strains of bacteria from our skin and our mouths on $1 bills circulating around New York City.

“Bacteria can live for weeks on bills, especially considered where they’re kept: rolled up in a pants pocket, or folded into a wallet or purse, and sequestered in a nice, warm dark place where bacteria likes to grow,” Dr. Philip Tierno, a clinical professor of Microbiology and Pathology at NYU School of Medicine.

You should probably never touch a door handle ever again, those things are poop magnets, and whatever you do, do not use the remote control at a hotel.

Poop is everywhere, and there’s nothing you can do about it. Pretty shitty, eh?