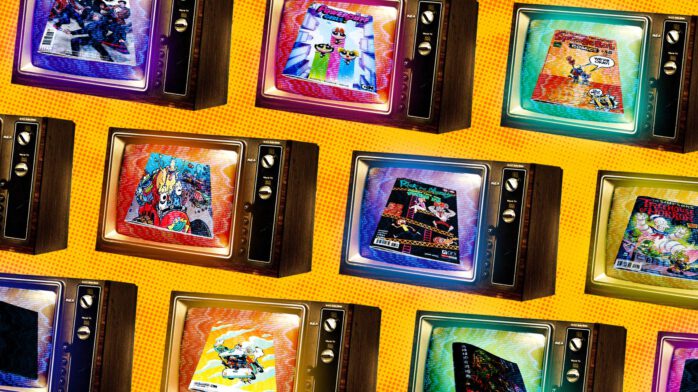 7 of our Favorite TV Shows that Became Comics 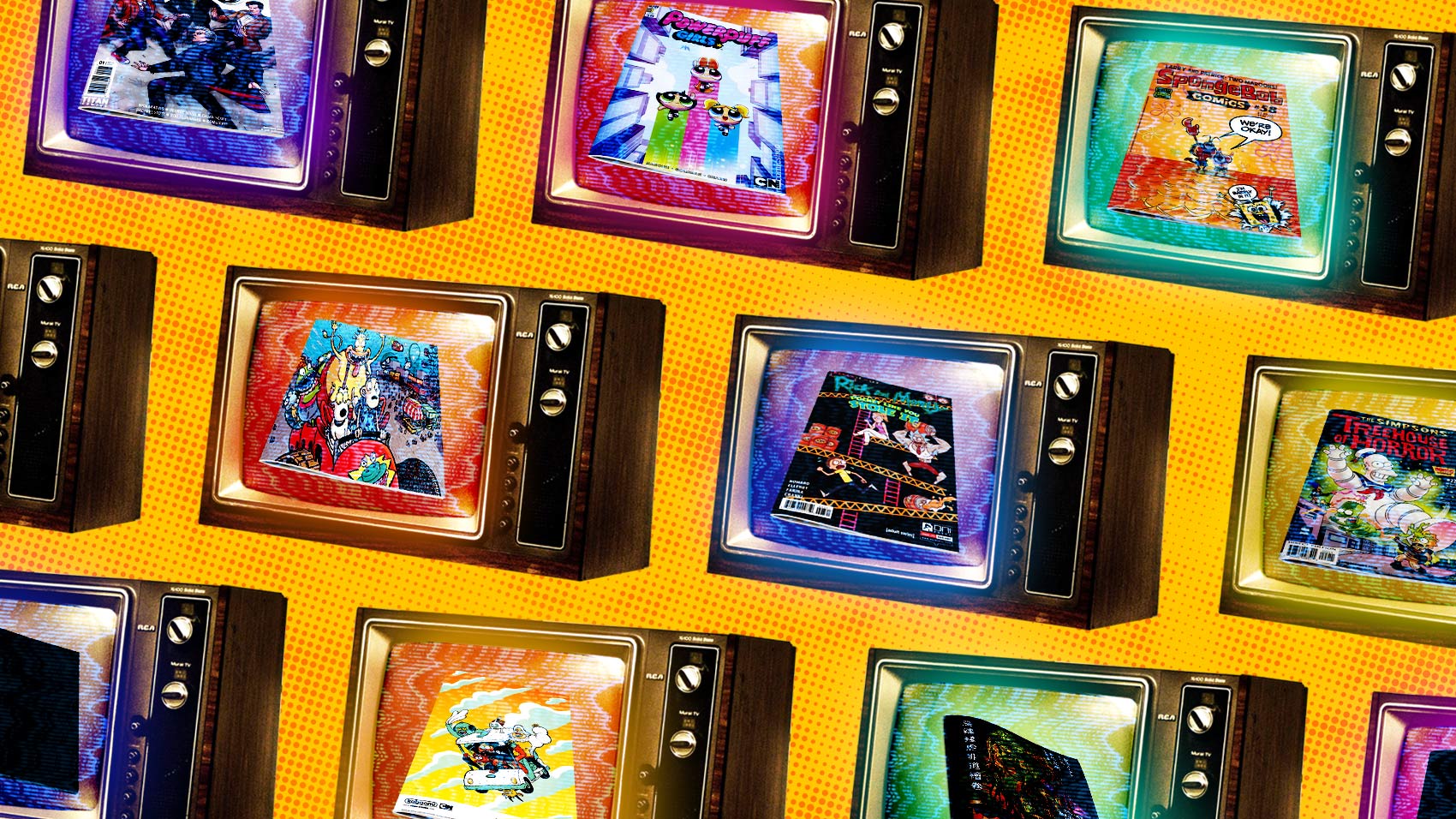 Netflix and network TV are inundated these days with programs based on the old Marvel and DC classics. You can experience the whole gamut of quality in there, from barely passable kitsch to mind-bending storylines and sequences (I’m looking at you, Legion).

With BOOM! Studios and IDW recently recasting a handful of favorite 90s cartoons into comic form, there’s no time like the present to reacquaint yourself with the beloved characters of programs past. Below is list of books we love that began life on the small screen.

An Adult Swim favorite, Rick and Morty made its way from The Cartoon Network to Oni Press in 2015. Following the same formula of pseudo-sciencey hijinks begetting inter-dimensional mayhem a la Back to the Future, the comic is often as laugh-out-loud silly as the show.

Zac Gorman’s and CJ Cannon’s creations are excellent, but don’t forget to check out Tini Howard’s Rick and Morty mini-series Pocket Like You Stole It. Written on the heels of the Pokemon Go! craze, it’s excess and bloodsport in the best of possible ways. 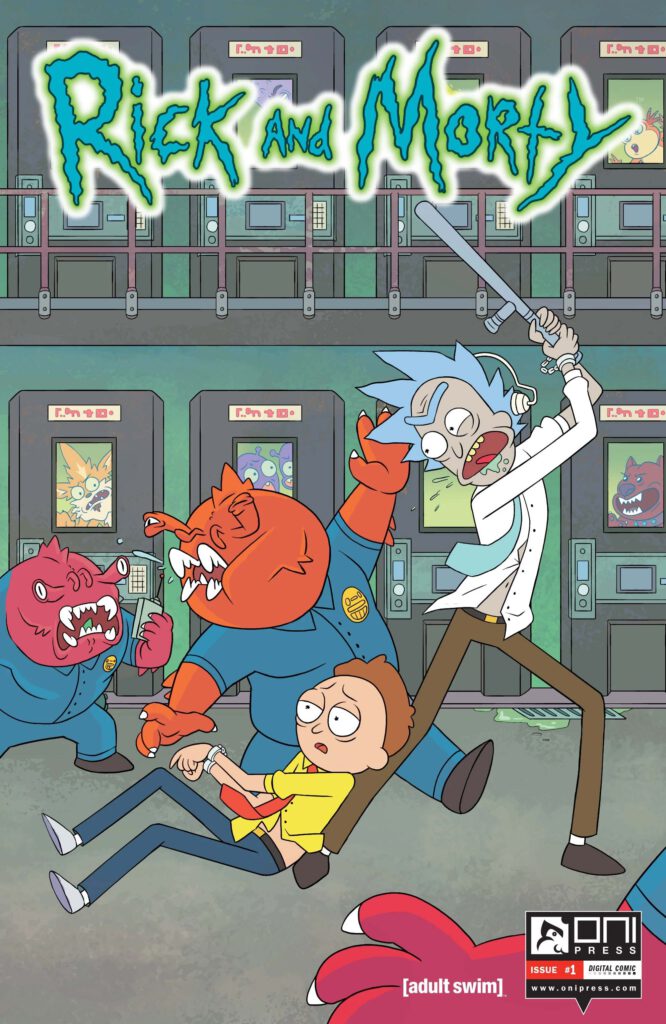 It’s no surprise that the decade that brought us super catchy pop songs about AIDS and meth addiction also introduced an anxiety-addled everyman who skipped through life mere inches ahead of daily disasters.

While the wayward wallaby and his mates were a welcomed addition to many a 90s teen’s after school routine, the book version is a much sharper take on the existential obstacles of our times. Ryan Ferrier and Ian McGinty keep the gang’s original weltschmerz in tact while leaning a little less on fart jokes and a little more on social commentary. Start with Issue 1 – you’ll be giggling your way through the entire series in no time. 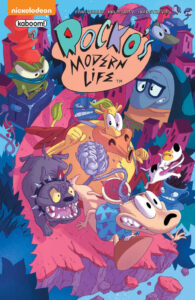 It’s a well-known fact that it’s simply not possible for fans of The Doctor to get enough of The Doctor, especially given the fits and starts the show’s scheduling saw over the past few years. The combination of insatiable Doctor devotees and the Beeb’s desire to milk its cash cow for every last drop of profit has ensured a steady stream of storylines in print.

Doctor Who: The Lost Dimension #1 is a great place to get started, as timelines cross every which way, giving you several versions of everyone’s favorite Time Lord as he attempts to save the universe from The Void. By the way, if you’re an alleged Whovian whose knickers are still in a twist that The Doctor regenerated into a woman, you clearly haven’t been paying attention and you’re just plain wrong. (Seriously, if The Doctor can wear Malcolm Tucker’s face for a few years, anything goes.) 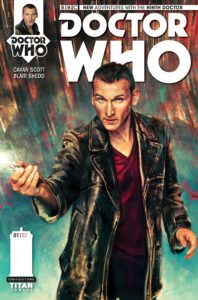 Next year, America’s most-watched family will have been on the air for 30 years. Not a particularly surprising factoid, considering how often they like to tell us about it, but don’t you feel old now?

The creators were fairly quick to capitalize on the show’s success with a handful of one-shot books in the early 90s, but the real prize is the annual Treehouse of Horror series, which has seen the likes of Garth Ennis, Gene Colan and even Rob Zombie weave its tales. Set a reminder in your calendar for October. It’s $4.99 well spent. 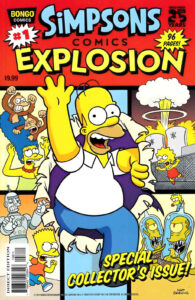 With the ability to appeal to middle school students, stoned 34-year olds, over-educated, insufferable Wes Anderson fans, and all other responsibility-dodging demographics, Regular Show’s surreal collection of silly stories has kept us going for almost a decade.

BOOM! Studios’ series has done well to maintain the absurdity with a steady stream of adventures that only Mordecai and Rigby could contrive. While any ol’ issue was enjoyable, I’m looking forward to the six-issue limited series set to come out this June, which sees our heroes and their buds 25 years older than when we last met them. 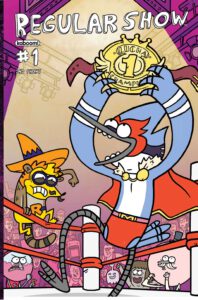 Considering somewhere between 5% and 400% of children want to become marine biologists, the success of SpongeBob SquarePants was hardly a surprise. There’s something about the allure of underwater realms, with their endless cast of alien characters, that appeals to little minds. Centering stories around a perpetually puerile sponge is a great way to absolve the fear of the deep and make the ocean more approachable.

SpongeBob Comics keep true to the spirit and humor of Bikini Bottom, eliciting laughs even when you know you should have outgrown this stuff long ago. Am I going to pick up a copy of SpongeBob Comics over Matt Kindt’s Dept H to scratch that sea itch? Hell no. But if you want Tom Kenny to voice your internal monologue hours after you’ve put the book down, this is your jam. 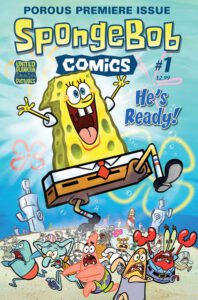 Call me a sentimental 90s girl, but the release of IDW’s print adaptation of The Powerpuff Girls got me rooting through boxes and dragging out that ol’ Bis CD. And IDW didn’t disappoint, with familiar fiercely determined googly eyes staring out at you from a bubblegum pop palette. Mojo Jojo is still the thorn in Blossom’s, Bubble’s and Buttercup’s sides, thwarting their efforts to save Townsville from his latest nefarious deed.

The book is a great nostalgia fix, and if you have young kids, it would be a fun vessel by which to show them that girls can kick ass. Maybe not a revolutionary tome, but as far as print reboots of classic shows go, it certainly holds its own. 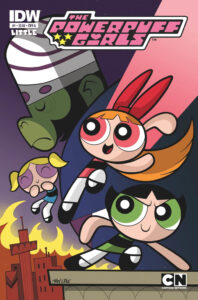