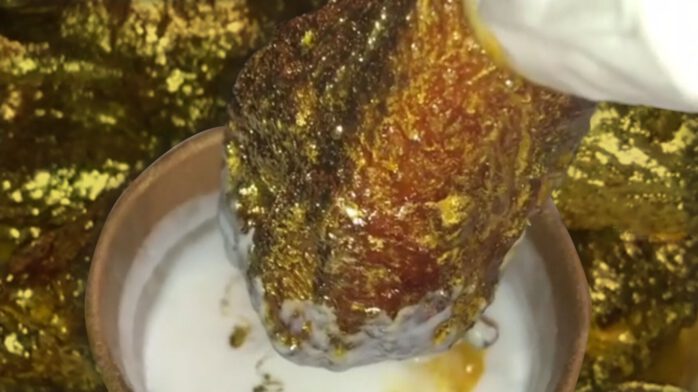 A restaurant in New York City has 24-karat gold chicken wings on the menu. These wings are brined, coated with a house-made dry rub, baked, flash-fried, and then coated in a layer of gold dust. If you want to waste $45, they’ll give you 10 golden wings to eat and subsequently turn into gold poop; if you’d prefer to waste $90, they’ll let you turn 20 golden wings into gold poop.

Or, if you really want to let everyone know you have more dollars than sense, you can waste a whopping $1,000 for the chance to turn 50 golden chicken wings into poop… and a bottle of Ace of Spades champagne into pee.

Why is this happening? We’re guessing it’s so blogs and other media outlets will write stupid stories about it, ultimately giving this restaurant free publicity, and the blogs and media outlets precious clicks on their websites. Or as the restaurant’s owner told CNN, “We wanted to create something over-the-top that’s never been done before, and you’ve never seen or tasted anything like it before.” We’ve presumably never shit out golden turds before either.