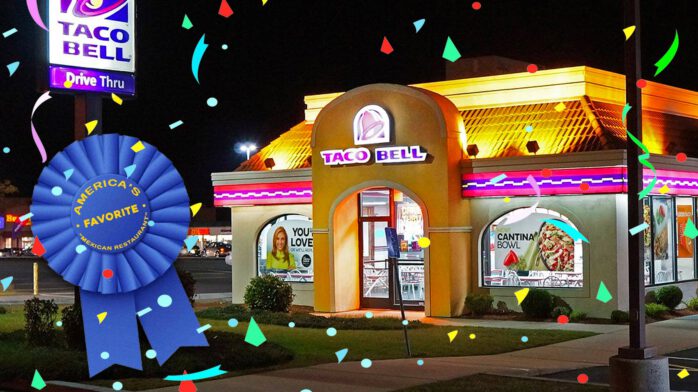 Corroborating what many Americans have believed for years, Yahoo! Finance has reported that according to a survey, Taco Bell is officially America’s favorite “Mexican restaurant.”

The fast food chain that brought us a taco shell made out of fried chicken and burrito topped with spicy pop rocks is your favorite “Mexican restaurant.” It should be known that Riot Fest has a strict “No Scare Quotes” policy, we’re merely reporting this news verbatim.

This report isn’t terribly surprising, considering you disgusting people ate 53 million orders of Taco Bell Nacho Fries in the first five weeks they were on the menu. Yep. That’s 1.5 million orders of french fries dusted with Taco Bell taco seasoning and a small tub of processed cheese sauce every day.

The Harris Poll EquiTrend Study is an online survey of over 77,000 Americans ages 15 and up about the familiarity, quality and future consideration of brands, which then aggregates this data into a score.

“Taco Bell’s marketing is ubiquitous, so it wasn’t surprising to me that they came out on top this year,” said survey director Amir Kanpurwala. “It’s not so much that Moe’s or Chipotle are falling off the map. Taco Bell has just been a stronger brand as of late, as demonstrated by the strong familiarity and consideration marks.”

“Have you tasted their heavenly ground beef?” is what Kanpurwala would have added, were he being candid.