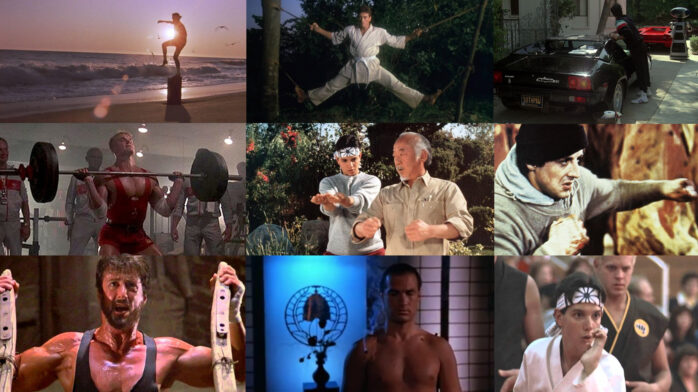 With 10 half-hour episodes, the (outstanding) new YouTube Red series Cobra Kai does for 1984 film The Karate Kid what Ryan Coogler’s Creed did for the Rocky hexology: exhibiting affectionate reverence to the occasionally ludicrous lore of its predecessors, without degenerating (that much) into smirking nostalgiabation. Somewhat surprisingly, it only features one real, legit throwback training montage… probably because five hours is plenty of time to tell a story without resorting to the Rocky IV approach, i.e., “Oh shit, Sly only wrote 60 pages—how are we supposed to bump the runtime to 90 minutes?!”

Said montage consists of everyone’s favorite antihero, Johnny Lawrence (played by a surprisingly sharp and spry William Zabka), taking bullied Ecuadorian pupil Miguel to the next level at his eponymous evil dojo: sparring, breaking assorted blocks of wood, and forcing the poor kid to deflect and/or dodge multiple baseballs fired point blank from a pitching machine. All of this ends with Miguel dropping Johnny to the mat via a merciless leg-sweep, dropping his guard juuuuust long enough in celebration to allow his sensei to manually trigger one last heater, which does serious, possibly ER-worthy damage to the teen’s right ear. Good stuff! Not to mention the tone is spot-on: It’s intense, cruel, creative, funny, and not overdone with an on-the-nose, ironic soundtrack selection.

If the training montage in indeed is its death throes, Cobra Kai would be a fitting farewell.

While this particular trope is today almost entirely associated with gloriously cheeseball late-80s/early-90s action films, it’s rooted in monomyth, i.e., “the hero’s journey.” Specifically the transformation stage, during which the protagonist—en route to recovery from a personal nadir—must endure a physical (or spiritual, or both) gauntlet to achieve inner peace before ultimate victory. In your everyday vintage standalone action flick, this process usually concludes the second act, segueing seamlessly into the heart-racing lead-up before said final confrontation. Once atonement is achieved, our hero can effectively shoot, stab, gauge, or incinerate his or her (let’s keep it real—usually his) way through assorted Mini-Bosses before stepping up to crane kick the Big Bad into a happy ending.

The original Karate Kid modified this approach a little bit. Training is the heart of the film—namely Mr. Miyagi’s eccentric/sage lessons for Daniel LaRusso (the repetitive motion of, say, waxing vintage automobiles eventually translating to unbreachable defense). Karate Kid’s actual, deservedly infamous montage is a fight montage; a succession of Mini-Boss takedowns. It works for a variety of reasons: Joe Esposito’s “You’re the Best Around” is the perfect period-appropriate sonic abortion, and from a narrative perspective, it helps us suspend our disbelief that scrawny-ass Daniel-San could last three seconds with a single member of Cobra Kai.

Typically, the most powerful training montages depict the arduous metamorphosis from either a) a rank amateur, b) a good fighter coming off unexpected ass-kicking, or c) a good fighter whose heart just isn’t in it anymore, to—often literally—a well-oiled decimation machine. The Rocky series somehow accomplished all of the above to such a wonderfully dumb degree that comparatively levelheaded and more realistic entries like Rocky Balboa and Creed had to follow suit simply to stave off mass fan revolt.

The results vary from awe-inspiringly iconic (the 1976 original’s exhausted charge up the Philadelphia Museum of Art steps), to the confusingly homoerotic (Rocky finally besting Apollo in a beach footrace in the third film, culminating with a short-shorts embrace in the surf that unintentionally gave Mentos commercials a raison d’être).

Even those ridiculous examples pale in comparison to literally everything that happens in the insane asylum that is 1985’s Rocky IV. The Cold War-era showdown gave us not only an emotional montage (Rocky cruises around in his Lamborghini Jalpa, as one does, as a dramatic reaction to—SPOILER ALERT—Apollo’s fatal exhibition match, set to Robert Tepper’s unreal-awesome “No Easy Way Out”), but two Siberian training montages.

Unless you’re just a hopeless, joyless bastard, you should find this to be the pinnacle of the vintage training montage as an art form; an eye-popping display of (chemically enhanced, but whatever) raw, virile physicality. Not to mention that by clocking in at around six and a half minutes, this could very well be the longest classic montage as well… so grab a snack and get comfy.

Only Jean-Claude Van Damme comes close to the first four Rocky films’ montage mastery, via late-’80s celluloid siblings Bloodsport and Kickboxer. The former almost trumps Rocky IV by virtue of its seemingly endless supply of montages. There’s the training montage where a blindfolded Van Damme must serve tea to a blindfolded shidoshi and his wife, then groin-stretch his way to his trademark splits.

There’s also an emotional montage, during which Van Damme mopes around Bangkok’s public transit system after the ruthless Chong Li face-stomps his BFF Ray Jackson and yoinks his stupid Harley bandana. There’s even a mini-boss montage that showcases the unique pugilistic styles of no less than 15 international fighters (how Bloodsport has yet to be adapted into a bestselling video game, I have no idea).

More often than not, Van Damme imbued his persona with vulnerability—he was a strong believer in the monomyth and had no problem incurring a beatdown in training, the ring, or elsewhere to make the final fight more emotionally cathartic. (See: the montage-free but still insanely entertaining Double Impact, his second and sadly final cinematic showdown with incomparable Chong Li portrayer Bolo Yeung.)

Conversely, Jean-Claude Van Damme’s second-tier archrival (and pony tail enthusiast) Steven Seagal rarely took so much as a punch in his prime (brief missteps in Above the Law and Marked for Death notwithstanding). Seagal’s innate peacocking egotism doesn’t make him a strong candidate for a training montage (if you never lose, what do you have to gain?), but 1990’s Hard to Kill is an exceptional exception.

Protagonist Mason Storm has endured a seven-year coma, muscles badly atrophied, so he needs to slowly but surely get his shit together in order to properly waste the corrupt politicians and cops who waxed his wife in cold blood and left him for dead. Nobody will ever mistake Seagal’s physique—even in 1990—for anything in the same stratosphere as Van Damme, Schwarzenegger, or Sly; but his slow return to form gives us a taste of meditative eastern healing… roughly a half-hour before he slams a pool cue into a thug’s throat while informing him, “That’s for my wife. Fuck you and die.”

It would be impossible to cover the vast expanse of killer non-action-movie training (etc.) montages; from sports classics (Major League, Rudy) to shrewd parody (Team America: World Police, Wet Hot American Summer), but the increased presence of the latter indicates that the form as we know and love it is pretty much kaput. We’re too steeped in post-post-irony for filmmakers to take the action montage beyond what Creed and Cobra Kai accomplished… at least not without stifled giggle fits, which is a shame. The best montages can only be compared to a fine, stinky cheese that never spoils.