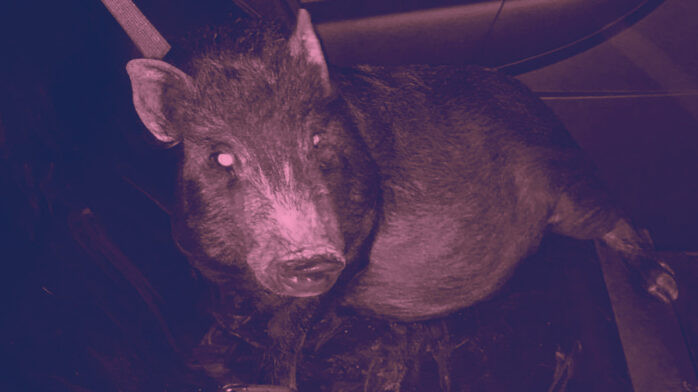 Pig Follows Ohio Man Home for Some Love, Ends Up in the Back of a Cop Car

The North Ridgeville (Ohio) Police Department thought they were dealing with your standard “drunk guy calls 911 to report a non-existent pig following him home at 5:30am.” Who hasn’t been there before?

When the police caught up with the man—whom they’d expected was very drunk, remember—he was walking a straight line… with a pig following close behind.

Ryan Singley, the man who the pig was following, told Cleveland’s WEWS that the animal seemed to just want some attention. “It was staying close to me, rubbing against my legs, and was trying to climb up my legs to get me to pet her. She was very sweet and nice, and the responding officer was in good spirits about the whole thing,” Singley said.

The pig, someone’s pet that escaped through a nearby fence, was taken into custody and was later released to it’s owner on it’s own recognizance.

To those of you inclined to make jokes about a pig riding in the back of a cop car, the NRPD doesn’t think you’re very funny. We think you’re hilarious, though.

At 5:26 this morning we received a call from a male who stated that he was walking home on Center Ridge from the Train Station in Elyria. He went on to state that he was being followed by a pig and didn’t know what to do. A pig. Riiiight.

Night shift responded to the obviously drunk guy walking home from the bar at 5:26 in the morning. He was at least drunk enough to call the police on himself while hallucinating.

Upon arrival, they found a very sober male walking eastbound on Center Ridge near Maddock Rd. from the actual Amtrak train station in Elyria, not the bar. Oh, and he was being followed by a pig.

Ptlm. Kuduzovic managed to wrangle (I think this is the correct word to use) said pig into his cruiser and he is currently secured in our pig pens…..er, dog kennels. Whatever.

You’d have thought we would have learned our lesson after the kangaroo incident.

Is this real life?

Also, we will mention the irony of the pig in a police car now so that anyone that thinks they’re funny is actually unoriginal and trying too hard.

Have a great day.