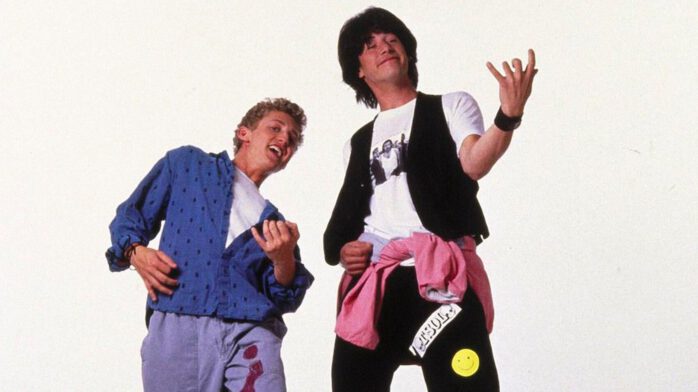 Bill and Ted are Back to Make America Excellent Again

Strange things are once again afoot at the Circle K. Thirty years and one bogus journey have passed since we first went on Bill & Ted’s Excellent Adventure, and now it’s official: Bill and Ted will finally face the music.

Backing up years of speculation, Keanu Reeves and Alex Winter are officially returning as Ted Theodore Logan and Bill S. Preston, Esq. to finally complete the trilogy with a new film, Bill & Ted Face the Music. In it, Bill and Ted will reportedly be middle-aged dads who travel back in time with their teenage daughters to find the inspiration needed to write the greatest song of all time.

“We couldn’t be more excited to get the whole band back together again,” Reeves tells the Hollywood Reporter.

In 2017, Reeves told BBC’s Graham Norton that in film, the dudes are burdened with writing “a song to save the world and they haven’t done that. The pressure of having to save the world, their marriages are falling apart, their kids are kind of mad at them, and then someone comes from the future and tells them if they don’t write the song it’s just not the world that’s destroyed, but the universe. So, they have to save the universe because time is breaking apart.” Which totally sounds about right.

No word yet on if Hollywood will digitally recreate George Carlin as Rufus (whose 2008 passing was totally bogus), and no date has been announced for the release of the new film. And while we’re no Socrates, with the project currently in pre-production, we’d expect a theatrical release sometime in 2019, to coincide with the 30th anniversary of the masterpiece that started it all, Bill & Ted’s Excellent Adventure.