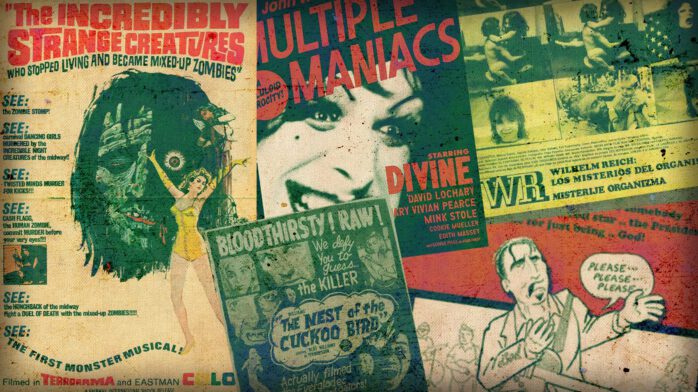 Though the term punk rock has been appropriated by any number of disparate subcultures over the years—often for outright contradictory purposes—the initial concept is generally understood as one built around willful bad taste… a grand subversion of hippie self-seriousness.

Though this was greeted as a new thing in the late 1970s, punk was actually something of a postmodern nostalgia movement; one which embraced the dumbest un-reconstituted trash of the generation prior: disposable bubblegum pop, bad rock ‘n’ roll, plastic clothes, and indeed, cheap grindhouse movies of dubious quality.

It’s not for nothing that the first book of collected works by rock critic royal/early punk adopter Lester Bangs, Psychotic Reactions and Carburetor Dung, included a bemused review of Ray Dennis Steckler’s The Incredibly Strange Creatures Who Stopped Living and Became Mixed-Up Zombies in between speed-addled rants about Lou Reed.

There’s a seemingly endless selection of trash movies from the pre-punk days, many of them glowing beacons of mindless juvenilia which would go on to influence punk, and I’m not going to get to even a fraction of them here (“What, no Johnny Guitar? No Faster, Pussycat! Kill! Kill!? What the hell is wrong with this guy?”).

I would argue, however, that the selections below are among the most punk: they’re cheap, they’re obnoxious, they’re subversive, and they’re fun as fuck.

Throughout much of his life, character actor Timothy Carey was one of Hollywood’s favorite freaks. A young Stanley Kubrick let Carey loose to chew scenery in both The Killing and Paths of Glory; later, Francis Ford Coppola practically begged him to be in the first two Godfather movies (Carey refused because he was hard at work at one of his many failed passion projects, Tweet’s Ladies of Pasadena). He was even Quentin Tarantino’s first choice to play boss Joe Cabot in Reservoir Dogs, before that honor ultimately went to another renowned Hollywood weirdo, Lawrence Tierney.

While filmmakers often found Carey to be a difficult collaborator—prone to ignoring the script and adding fart jokes wherever possible—he was also the kind of actor who immediately elevated a film with his weird, outsized presence.

Perhaps Carey’s most notorious role, though, is for a film in which he wrote, directed, and starred, The World’s Greatest Sinner. In this demented little wonder, insurance salesman Clarence Hilliard quits his job, changes his name to God, and becomes a “rock and roll messiah,” calling on his followers to become “superhuman beings” and eventually leveraging his ill-gotten stardom towards a career in politics (hmm, that sounds familiar…).

It was pretty far-out stuff for the late 1950s, and with scored by a young Frank Zappa, to boot! What makes it especially punk, though—aside from the subversive subject matter—is the complete mania of God Hilliard’s rallies, which are about as buck as anything Iggy Pop would do a decade later.

To some (boring) tastes, the work of the late cinema brut auteur Ray Dennis Steckler is that of a filmmaker who might even edge out Ed Wood in the race for Worst Director of All Time.

In fact, his most notable modern claim to fame was having his classic, previously- (and brealthlessly) mentioned The Incredibly Strange Creatures Who Stopped Living and Became Mixed-Up Zombies roasted by our favorite bad movie repository, Mystery Science Theater 3000. However if you, like me, value feverish ingenuity over dreary respectability, that contention doesn’t make a lick of sense.

Rat Pfink a Boo Boo is a rock & roll crime drama which inscrutably turns into a hilarious-yet-extremely janky superhero chase movie around its halfway point, ending with its titular characters crashing a (real life!) Christmas parade, pretending that the crowd is for them.

The whole thing is bizarre, no-budget bliss, full of gonzo sub-MAD Magazine satire, bikini girls dancing in monster masks, a guy in a gorilla suit, and sleazeball creeps in sunglasses attacking people with lengths of chain.

Legend has it that the title was originally The Adventures of Rat Fink and Boo Boo, but the title card came back rife with typos and omissions and, not having the budget to have them remade, Steckler just decided to change the title. If that doesn’t presage the busted-Xerox, basement studio vibe of punk rock, I don’t know what does.

For years, the only known evidence of Nest of the Cuckoo Birds, the passion project of writer/director/producer/star Bert Williams, was a couple of print ads, promising a film full of “stark naked drama” and “quack love”, and even claiming that it was “Voted Primitive Art Film of the Yea” (by whom, they don’t bother to say).

For decades, though, nobody could seem to cop to actually seeing the film (though this didn’t stop dedicated trash trawlers the Cramps from writing a song about the unseen movie for their 1994 LP, Flamejob). Indeed, most were convinced that the film was lost to the sands of time, until a solitary print turned up in a movie theater in the last decade or so. That print was jointly purchased by Drive director Nicolas Winding Refn and Harvard University, restored, and it’s now slowly starting to make the rounds.

So, was it worth the decades of waiting, hoping, and hyping? Not everyone is going to think so, but fuck ’em! The Nest of the Cuckoo Birds finds Williams’ detective protagonist running from violent moonshiners, only to end up in a backwoods inn which might be even scarier than the gunfire and gators he escaped to get there. Yeah, the dialogue and acting isn’t the best, but if you ask me, it works great in context.

The whole thing is cortex-rattling southern gothic surrealism which evokes a David Lynch without any of the time, money, or art school training. Nightmarish, rhythmically jarring, and with some of the weirdest makeup you’ve ever seen, this thing is one of the most hypnotic cinematic experiences I’ve had in recent years. Also, it’s mercifully short, so even if your experience isn’t like mine, it can’t be all that bad.

Of course, I’d be remiss if I didn’t acknowledge the massive influence John Waters has had on punk aesthetics: the dayglo hair dye and bad makeup, self-aware dedication to teenage nihilism, and gross-out humor that defined punk’s early days were all Waters earmarks years before the Ramones played their first show.

No filmmaker before Waters had made being bad seem like so much fun, and he’d almost never show any negative consequences suffered as a result of that bad behavior Hell, even trash merchants like Ed Wood and Herschell Gordon Lewis would tack on some kind of moral at the end.

Surely, any early Waters film could go on this list, but why not start with the earliest one you can currently get, and almost certainly the punkest? Multiple Maniacs is all murder, mayhem, and street hysteria, a gob in the eye of both 50s squaredom and the Love Generation, a stink bomb dropped smack dab in the middle of popular culture as it stood. A younger Waters would surely be repulsed to know that the film would one day be released by the Criterion Collection and heralded as a work of primitive art; but really, that may be the most twisted thing about it.

Oh, and it’s also panspecies: While this is the second film on this list featuring someone in a gorilla suit, it’s the only one where someone has sex with the gorilla.

The trailer is pretty NSFW, so above is a scene that someone randomly put online, sans nipples and wieners.