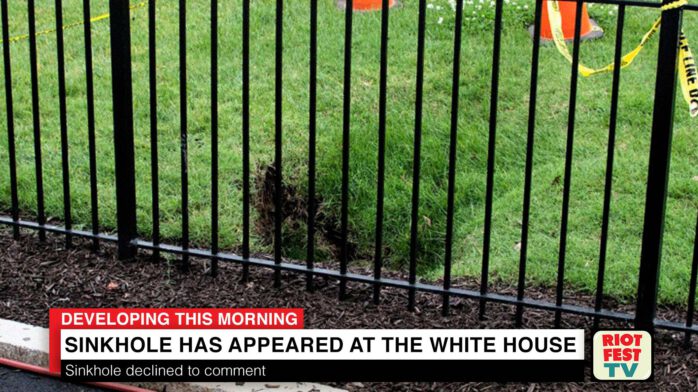 There’s a Metaphor Growing on the White House Lawn

A small metaphor in the form of a sinkhole has opened up on the north lawn of the White House in Washington D.C., and it appears to be growing. The sinkhole, first discovered near the entrance to the White House briefing room last Saturday following several days of heavy rain, is now surrounded with orange construction cones and caution tape.

It’s not uncommon for Washington D.C.—which is literally built on a swamp—to have sinkholes, but experts say even though the metaphor is growing, it does not pose any risk to the White House, nor the people who work or live there.

“[We’ve] been monitoring the situation and [we’re] bringing in some additional experts to help best determine a remedy,” National Park Service spokeswoman Jenny Anzelmo-Sarles said in a statement.

Terry West, a professor of earth, atmospheric, and planetary sciences and civil engineering at Purdue University, told CNN, “It would seem to be a sinkhole that would come about by an underground collapse of some sort, would be my best guess. It could be some construction debris that was not very highly compacted and has now begun to settle and fill in with soil around it, but it looks like it’d be more related to man-made activities than to natural causes.”

It could be that, however we’ll be monitoring the situation to make sure the metaphor isn’t actually a hoax, fabricated by the Democrats as an excuse for losing an election. Watch this space.