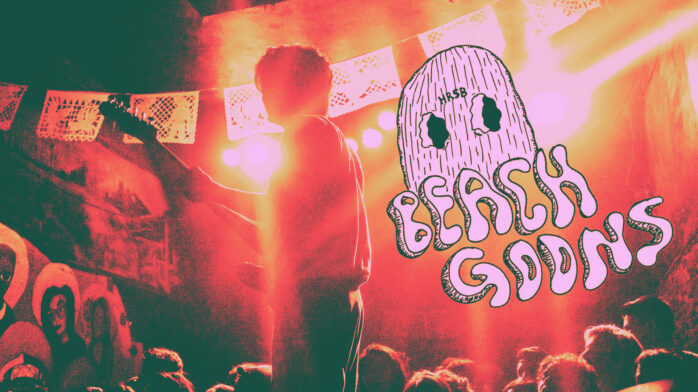 Maybe it’s the downtown: a nondescript floral arrangement of condos and banks, culminating in the frat-friendly Gaslamp Quarter. Or perhaps because from its countless gorgeous beaches to hip contemporary neighborhoods like Hillcrest and North Park, the vast majority of what’s interesting about San Diego requires a healthy Uber account to visit. Sure, the many commercial flights approaching and departing its single-runway airport soar deceptively close overhead (which you may find terrifying or exhilarating, depending on your perspective), but the second-largest city in California has by and large earned its nickname: Bland Diego.

Despite that, the Whale’s Vagina has quietly produced more than its share of memorable bands. From world-beating chart-toppers like Blink-182 and Stone Temple Pilots, to acclaimed indie outfits that caught the ear of national tastemakers following an early-’90s major label feeding frenzy, from Three Mile Pilot, Black Heart Procession, Pinback, and Creedle, to pretty much everything John Reis has riffed out on, San Diego definitely knows how to rock.

Hailing from prominent Mexican-American neighborhood Logan Heights, Beach Goons are too damn young to be local history majors (founding frontman Pablo Cervantez and bassist David Orozco are 19, while drummer Chris Moran will turn 21 just before their set at this September’s Riot Fest), although all are big Blink fans. That doesn’t mean they haven’t already tried to stamp their own footprint into the city’s diverse arts scene.

“There were shows mostly in [suburban] Imperial Beach, Chula Vista, North Park… even downtown, but usually not much in Logan Heights,” Cervantez says. “We tried our best to stretch it out there in the beginning. There were a couple of warehouses that I would rent out to throw a few shows at, so I could put Logan Heights on the map.

“On first impression, [San Diego] can be seen as a boring Navy town, with not much going on,” Moran adds, “but if you live here, you really get a chance to see the hidden gems of the city and what it has to offer that someone staying here for a couple nights necessarily wouldn’t [see]. Also, being so close to the border, culture bleeds into the city. More so southern San Diego, but still… the culture’s insane, probably because of how close we are to Mexico.”

It’s no surprise then, that Beach Goons have already cultivated a savory melting pot of influences—from Sly and the Family Stone and Chicano Batman to Sleep and Descendents (the latter of whom features “the best bass player in the world” in Karl Alvarez, according to punk lifer Orozco). On 2015’s BoiSad alone, the Enchantment Under the Sea-gone-full-throttle-punk of “Reservoir Dawgs” is a comfortable bedfellow to not only creepy Columbine-referencing instrumental closer “April 20, 1998,” but a reverential take on Spooky Black’s alt-R&B standout “Without U.” Suffice it to say, despite Cervantez’s prominent use of vintage telephone vocal effects, it would be unwise to write his band off as one-trick, uh, goonies.

“I don’t think we really try to even say we’re surf anymore,” the frontman notes. “On this next one, there’s not much [telephone filter]; you still hear some hints of it. I guess it all depends on what I’m picking out in the music I’m listening to at the time.”

“We’re definitely moving away from [surf],” Moran adds. “Especially on this next record and the one we’re gonna be working on soon. We’re trying to drift away from that as much as possible.”

“[We just want to] do something new.” Cervantez stresses. “And see what we can do with what we got.”

“Sometimes we’d play a backyard show, and it’d be too crowded…
To the point where our stuff was breaking.
It becomes a hassle at a point.”

After an outburst of productivity in 2015—19 songs spread out over full-lengths Summer Bummer and BoiSad, and a split EP with British Columbia surf-punks Freeks—Beach Goons are poised for, well, maybe not global domination, but at the very least a coastal uprising; their first-ever formal tour (with King Shelter and fellow Riot Fest 2018 featured artist Super Whatevr) kicks off in mid-August.

They’ll have plenty of new material to showcase, particularly in the form of third LP, hoodratscumbags (they have a way with album titles, huh?), due August 24 on GRNDVW. The first two singles, “Vatos Tristes” and “Hunny Bunnies,” appeared on Summer Bummer, and should serve as sufficient bridges between Beach Goons’ past and future; featuring vintage reverb, heavily distorted vocals, and shit-tons of energy.

The latter track, FYI, is not a reference to Pulp Fiction, but those zillion-calorie Little Debbie treats you can snap up “at any liquor store,” according to Cervantez. “When I was writing the song, I didn’t have anything to name it. The first thing I saw was a Honey Bun, and I ended up calling it ‘Hunny Bunnies.’”

As you may already have guessed, BoiSad is strictly an ironic title. However, despite that there are no sad bois in this band, the Goons are anything but your typical shiny, happy SoCal pop-punkers. “Ironically, I hate the beach,” Cervantez laughs; “I mean, none of us surf,” Moran shrugs.

That devil-may-care attitude has translated into a handful of singular live performances you’ll need to find on YouTube so you can say you knew them when—from an intimate acoustics-and-floor-tom showcase in San Diego’s Balboa Park to a surprisingly mosh-laden set beneath a ramshackle tent in San Ysidro (believe it or not, they’ve even gotten a wall of death once). “We’re open to anything, but we’ve focused more on venues recently,” Cervantez says. “Not many people hit us up for house shows anymore. Sometimes we’d play a backyard show and it’d be too crowded. It’d be to the point where our stuff was breaking. It becomes a hassle at a point.”

As to the future, like Alice said, school’s out forever. None of the three have any college aspirations, and all have the backing of their parents—Orozco and Cervantez have been making music since age 14, and Moran’s parents (who now live in Chile) allowed the boys to refine their rowdy sound in their house. Riot Fest may be Beach Goons’ first official festival, following that first official tour, but any nerves they have are offset with confidence and enthusiasm.

“I think we’re all really excited to play so far away from home,” Moran says. “We think it’s really important to put a lot of energy individually into a live show, so the crowd feeds off that, and we feed off the crowd, and get that symbiosis of energy and fun.”