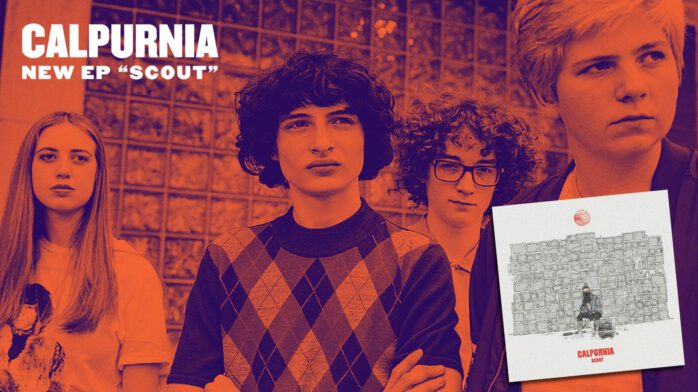 Calpurnia dropped its debut release today. We’re pretty sure—without doing any research whatsoever—that this new six-track Scout EP is the only record released this week that was both produced by Twin Peaks frontdude Cadien Lake James and features one of the stars of Netflix’s throwback horror phenomenon, Stranger Things. Scout is available now on all download and streaming services (and perhaps a record store or two), and directly from the band’s label, Royal Mountain Records.

In case you haven’t been keeping up, Calpurnia is a four-piece rock band from Vancouver, British Columbia, led by Finn Wolfhard—better known as Stranger Things‘ young protagonist, Mike Wheeler, and Richie Tozier in last year’s remake of Stephen King’s It. Wolfhard met drummer Malcolm Craig on the set of a video shoot, and the two hit it off immediately. Guitarist Ayla Tesler-Mabe and bassist Jack Anderson soon filled out the rest of the band; they then thought of a unique name, got a plum slot at Riot Fest 2018… and now here we are, with some new music to enjoy on this freakiest of Fridays.

The EP’s lead track, “Louie,” is “the lively and colorful product of a studio transformation,” lead guitarist Ayla Tesler-Mabe said in a press release from when Scout was announced a couple months ago. “It was definitely the intention to record a song that sounded as live as possible, and we sincerely hope that this energy comes through to the listener when you listen to this track.” No word yet on if it goes up to Eleven (sorry, couldn’t resist).

Listen to, “Louie” below, and make sure to see Calpurnia at Riot Fest in September, or you’ll be sent to The Upside-Down without a net, you ingrate.

Calpurnia will likely turn Chicago’s Douglas Park upside down during their set at Riot Fest 2018. If you’d like to see what that looks like in person (as we do), buy your tickets now.