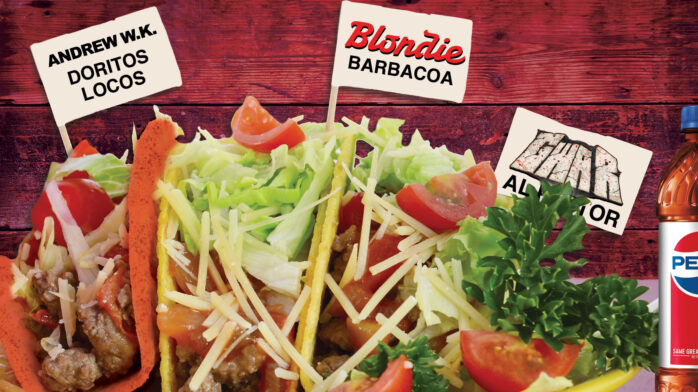 If Riot Fest Bands Were Tacos, Which Tacos Would They Be?

Happy Taco Tuesday. If you’re reading this on a day that’s not Taco Tuesday, you are wrong. Every day is Taco Tuesday if you try hard enough.

Liz Phair | The White Chocolate Space Egg Taco: A recipe handed down from generation to generation from Uncle Alvarez, this taco, made with white chocolate and a space egg, is perfect for a big tall man, or a polyester bride.

Alkaline Trio | Good Mourning Breakfast Taco: Served with a trio of vegan breakfast meats, this taco is made with vegan eggs and topped with vegan bacon, vegan sausage patties, and vegan sausage and covered in verde salsa with an extra kick.

Andrew WK | Doritos Locos Taco: A nacho cheese Doritos-flavored taco shell and all the best taco ingredients inside, it’s like a party in your mouth.

GWAR | GWAR’s Al Pastor Taco: Dripping with a delicious red marinade of chilies, peppers, garlic, cumin, orange and more, this pork taco will stain your fingers red, it will be like a tiny GWAR concert in the palm of your hands. It’s okay to make a mess.

Cypress Hill | Insane In The Brain Tacos de Sesos: A generous helping of cow brain topped with salsa verde, crisp onion, fragrant cilantro and squeezes of fresh lime. Who you trying to get crazy with, ése? Don’t you know that eating cow brains that have been infected with mad cow disease could give you Creutzfeldt-Jakob disease.

Beck | Nicotine and Gravy Taco: I think we’re going crazy, but we decided to make a nicotine and gravy taco. The cigarette smoke infused gravy is very addictive and will keep you coming back for more. This taco also included fruit that don’t exist.

Blondie | Rip Her To Shreds Barbacoa Taco: A taco stuffed with beef that has been ripped to shreds and folded into lightly grilled corn tortillas topped with onion, fresh cilantro and a zesty lime wedge. This is NOT a dull taco.

The Jesus Lizard | Seasick Taco: Take a dip, in the briny deep with this seafood taco. An interesting mix of squid rings, mussels, scallops, cold water prawns, sometimes tuna, maybe some lobster, oysters we think, something that looks like shrimp.

Bad Religion | Against The Grain Gluten-Free Taco: Three thousand miles of wilderness, but don’t worry, this delicious taco is 100% gluten-free. You can get this taco with shredded chicken or our grilled vegetables all served on a naturally gluten-free corn tortilla.

Thirsty? Wash it all down with a Suicidal Tendencies Cola, if you can find one. It tastes like Pepsi.